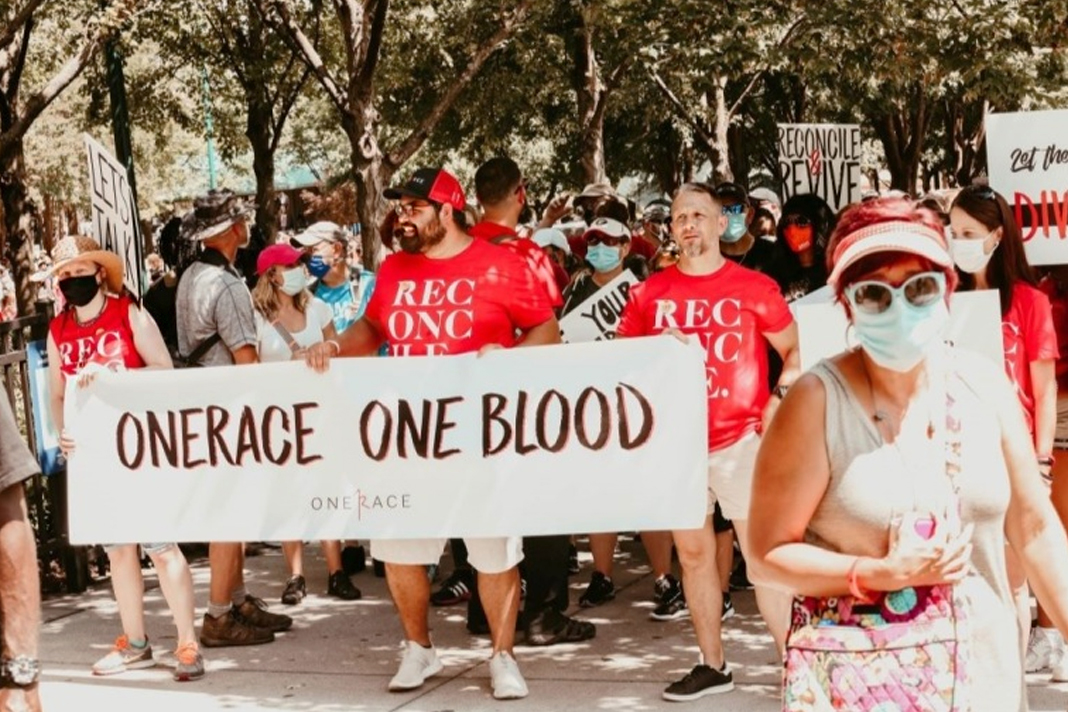 More than 13,000 individuals representing 500 churches across the denominational and cultural spectrum gathered recently, on Juneteenth, in Atlanta’s Centennial Olympic Park before marching to the State Capitol to petition both God and civic authorities for racial justice. Prayer was emphasized throughout the peaceful event, which OneRace Movement leadership explained occurred not only on the 155th anniversary of the final slaves being freed in 1865, but the 52nd anniversary of the Poor People’s March on Washington, D.C., in 1968, also protesting systemic inequality.

“We call for righteousness and justice from the highest offices in the land,” said OneRace co-executive director Josh Clemons. “And this is not just about trendy activism, but something that we live out every day.”

In the initial prayer time, co-executive director Hazen Stevens said, “I believe God hates racism, and God loves unity. We are taking a stand for unity, and we will start our stand on our knees.”

Pastor Crawford Loritts of Fellowship Bible Church, one of the historic leaders in the racial reconciliation movement in Atlanta, addressed the sin of racism.

“Racism is not a social inconvenience or a bad habit; it is a sin before God,” he said. “It has to be dealt with the same way we deal with all sin. It can never be endorsed, tolerated, coddled or put up with. We need to address that sin with a sense of holy impatience.”

Another key leader in the OneRace Movement and reconciliation in the church, Pastor Dennis Rouse of Victory Church—one of the most multicultural churches in the nation—commented that he has been working at this for 30 years, but hasn’t seen the white church ever be as involved as it is right now, which gives him hope for real change.

“If it doesn’t happen in the church, it isn’t going to happen in society,” he said.

Dr. Kendra A. Moman of Victory Church Midtown remarked about how the recent deaths of black people have led to today.

“The painful moments, these flesh moments, tear us apart and divide us when we should be united by blood,” she said. “Today we march, holding holy court in the city of Atlanta, petitioning and protesting for legislative change.”

Pastor Jesse Curney of New Mercies Christian Church reminded those in attendance that “you have to know the truth for the truth to set you free, and the truth is that racism and hatred [are] wrong,” he said. “We won’t be the church and the people that God has called us to be if we don’t unite together so that the spirit of racism, inequality and inequity can be broken.”

After a focused time of prayer by many of the pastors in attendance, the crowd headed out to march to the Capitol, where another time of prayer and worship was held on the Capitol steps. The crowd was so large that people were still arriving at Liberty Plaza halfway through the time there.

OneRace Movement co-founders Bishop Garland Hunt of The Father’s House and Pastor Billy Humphrey of New Bridge Church and Atlanta House of Prayer spoke during this session, commenting on the unity of the day. “It’s great to see all these faces as it’s what Jesus talked about in John 17,” Bishop Hunt said. “We refuse to allow anything to divide us.”

Pastor Humphrey added: “It is God’s dream that His people would not be divided by politics or race or anything else. That’s why Jesus shed His Blood, to reconcile us to Himself and to one another. We are all one in Jesus, and we are a testimony to the world.”

Following their comments, the pastors invited everyone to join them in honoring and praying for Atlanta Police Chief Rodney Bryant, expressing their love and appreciation for him. Afterward, the crowd knelt for four minutes of silence, recognizing the lives of George Floyd, Ahmaud Arbery, Breonna Taylor and most recently, Rayshard Brooks.

Justice Giboney of The And Campaign suggested some ways for the church to continue to move forward and make progress in civic engagement, recommending the Steps for Christian Civic Engagement on Racial Injustice from The And Campaign website. Latasha Morrison, founder of Be the Bridge and author of the book of the same name which hit the New York Times’ bestseller list this week, said internal work must come before external work in these efforts toward racial justice.

“We have to lean in and reflect on the role we may have played; then we have to respond and repent before we can repair and restore,” she said.

Closing out the event, Clemons reflect that this day had been a dream since Billy Humphrey’s conversation with civil rights leader Dr. John Perkins at Stone Mountain two years ago, when Dr. Perkins told him “I am looking at the fulfillment of my life’s work. Now, you have to take this to the streets.”

Stevens added, “I have hope that today is a turning of the page in our city and our culture.”