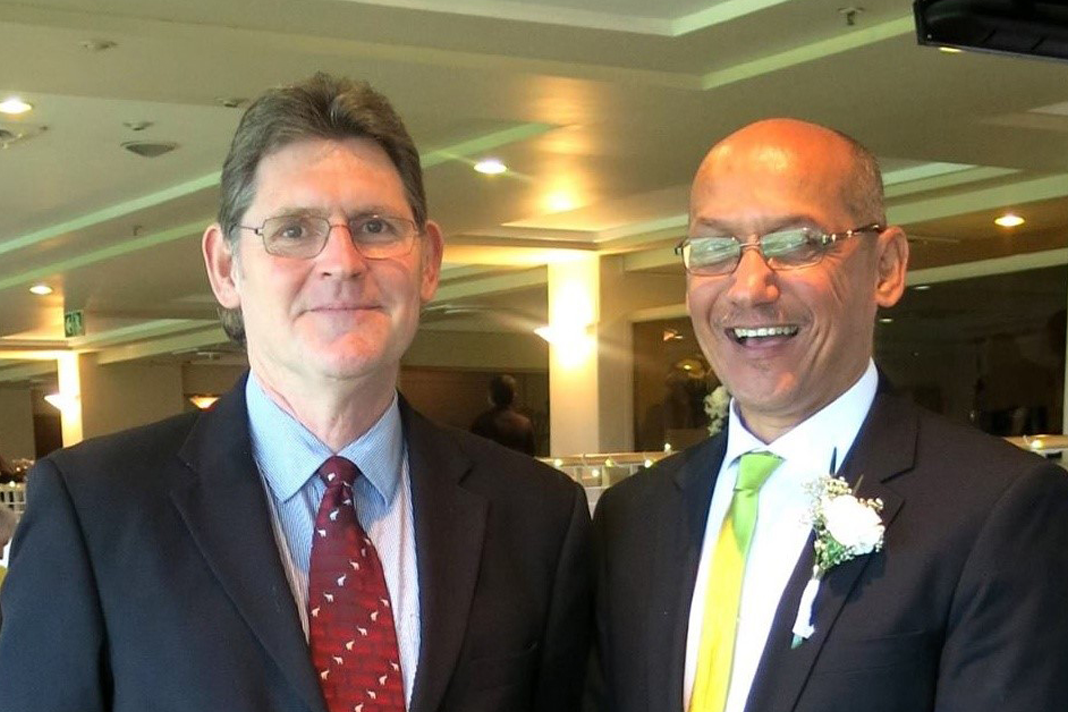 “What do you do when the leadership of an organisation you’ve spent your whole working life serving adopts a policy or position that your conscience won’t tolerate?” asks Reverend John Atkinson. He is one of four local Anglican Church ordained ministers who recently spoke out against the Anglican Church of Southern Africa’s (ACSA’s) anti-Israel doctrine.

Atkinson, along with Reverends Dave Doveton, Dudley Greenshields, and Allan Smith also wrote a letter to the United Orthodox Synagogues’ Chief Rabbi Dr Warren Goldstein, thanking him for taking a stand against ACSA’s approach to Israel, especially in the light of his recent open letter to Anglican Archbishop of Cape Town Dr Thabo Makgoba. In that letter, the chief rabbi said the archbishop was “making a terrible mistake that endangers your own church”.

After receiving the letter from the four ministers, the chief rabbi invited them to meet him, which both parties said was very positive. “We wanted the chief rabbi and the Jewish community to know that there are many Anglicans who would find these policies offensive and a contradiction of our faith,” said Atkinson. “We may be sanctioned, but we aren’t afraid. Standing for the truth and against antisemitism is much more important.”

The group believes that ACSA’s anti-Israel resolution “expresses the ideological perspective of a small but influential elite, and by no means is representative of the average Anglican in Southern Africa. This is why we have made public our rejection of anti-Israel decisions and policies in our denomination”.

Between them, the four ministers have about 160 years of service looking after congregations within their denomination. Two of them were lecturers in theological institutions. All of them have a wealth of experience in their chosen professions.

They are close to retirement, so their careers are unlikely to be negatively impacted by speaking out. “It won’t make us popular, but that doesn’t worry us,” said Atkinson. “There are more people who would speak out if their careers wouldn’t be impacted.

“The average Anglican hasn’t thought about the Middle East at all,” he said, so the Jewish community needs to know that it’s not like three million people have turned against Israel. The ministers will therefore work to increase education and awareness.

He was moved by the meeting with the chief rabbi, and hopes that it “will open the way for greater dialogue between our communities and a greater appreciation of the values we share”.

Delving into why they have taken a stand, he said “this crisis of conscience was precipitated by a resolution that was passed at the highest decision-making body in the denomination in 2019 to support the Boycott, Divestment, Sanctions [movement] and call for a boycott of Israel. The resolution also called on local bodies within the church to adopt these measures.

“Since then, the chief rabbi has had discussions with the Anglican Archbishop, only to be rebuffed. This has been of particular concern because of rising incidents of antisemitism in South Africa,” said Atkinson.

In the letter to the chief rabbi, they wrote, “We want to convey our assurance to you that not all Anglicans support the aforementioned [anti-Israel] synod resolution. Indeed, we are appalled that people in our church would even think of proposing such an antisemitic stance and shocked beyond belief that the synod would uncritically and without any debate pass the resolution.”

A synod is a council of a church, usually convened to decide an issue of doctrine, administration, or application.

They said they weren’t against the criticism of any state and its policies, “but the one-sided diatribe against the government of Israel elected by the people of Israel and the total alignment with certain militaristic organisations bent on the destruction of the Jewish homeland is beyond belief”.

It had caused “much grief and disappointment, as it casts a slur on all of us. The simplistic analysis ignores the role of other countries and organisations who play a direct and indirect role in geopolitics and conflict in the region, and one suspects is meant to advance a propagandistic narrative and shut down other points of view. Certainly, no representative of the Israeli state was invited to give their perspective at the synod.”

The ministers said that “to lay all the blame on the Israelis amounts to scapegoating, which as you are all too painfully aware, is a classic hallmark of the scourge of antisemitism”. They were also deeply disturbed by the resolution calling on them to boycott Israeli companies. “What a terrifying reminder of the horrific genocidal acts against the Jewish community in Europe,” they wrote.

They disagree with the assertion that the present state of Israel isn’t tied to “the historic Jewish nation recorded in the sacred scripture that we as faith communities share. We believe that it’s a thinly veiled attempt to undermine Israel’s right to exist, and is against the historical record. This, too, is a mark of antisemitism.”

They questioned why a church which is based thousands of kilometres away from the conflict “should be so committed to the promotion of one narrative and the total exclusion of the other. If our church is so concerned about the lives of Palestinians, why was it silent about the deaths of 3 383 Palestinians in Syria? We believe the answer is obvious.

“We would like to assure you that we will remain faithful and vocal about Israel’s right to exist and defend itself against attack,” they said. “We will continue to engage with other Christians on these issues to ensure that the pro-Palestinian narrative isn’t the only voice that is heard.”

“The significance of their letter struck home to me powerfully,” Goldstein said. “It shows that there is another voice within the Anglican Church and the Christian community in South Africa, so many of whom love and support Israel and appreciate its role in the world.

“We can easily make the mistake of thinking that certain politicians or religious leaders speak for the country when they come out with such anti-Israel vitriol,” he said. “This letter is indication of a much broader movement of South Africans who have a completely different view. It’s important for us to know that we have many allies and friends across the length and breadth of this country. That’s why I wanted to meet with this group who wrote to me, to express to them on behalf of our community how much we appreciate their friendship and their partnership in getting this message out.

“I’m sure that their letter will encourage others to come forward. Often people feel intimidated and don’t want to speak out. We need to create an environment in South Africa where all citizens can come forward and show their support. There is an enormous groundswell of the silent majority of South Africans who support Israel. I met this group to encourage them to get the message out so that more people can come forward and express their true views.”

Going forward, the ministers will work to “encourage the support [of Israel] in the Anglican population and beyond”, according to Atkinson. “The Jewish community can assist us in this endeavour by communicating with Christians they know about Israel and the Jewish perspective of the Middle East.”