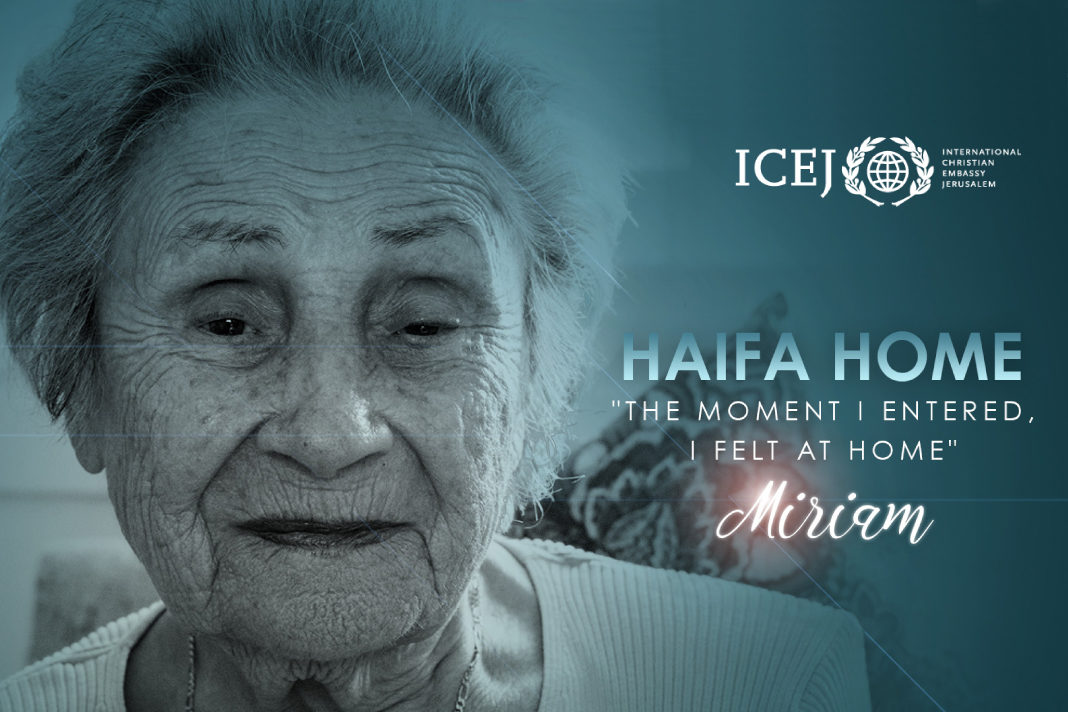 There are approximately 180 000 Holocaust survivors living in Israel today. Around one third are impoverished, struggling with illness, or living alone. In 2009, ICEJ began a partnership with a local charity to provide a home especially for lonely survivors. It offers attractive assisted-living facilities and a warm family environment.

The Haifa Home: providing a community
The Haifa Home continues to be a significant and vital project. It is a partnership in the true sense of the word, with a warm and trusting relationship existing between the Israeli staff, residents, volunteers, and the International Christian Embassy Jerusalem. The Home is unique in many ways. Its purpose has evolved from merely supplying accommodation for Holocaust Survivors, to providing a community in the real sense of the word. Local survivors enjoy a warm welcome at the Home for participation in various celebrations, activities, and services.

The Haifa Home has had an impact and influence beyond its walls
From the Haifa area, comes warm support in the form of volunteer help, free services, and invitations for outings. By hearing about survivors in a more personal way, many Christians worldwide have been touched by this project. In turn, their love and support has deeply touched the staff and residents. ICEJ is conscious both of the privilege of supporting Holocaust Survivors, and that time is running out as survivors pass away at the rate of 13 000 each year. Our involvement and responsibility to the Home is vital.

“The moment I entered I felt at home”
Meet Miriam, an inspiring Holocaust survivor who emigrated to Israel and raised a family in the Holy Land before joining the ICEJ’s Haifa Home and found love, and acceptance. Miriam was born in a town on the German border of Poland. Just five days after the war broke out, on September 6th 1939, the Nazis arrived in her town. In the winter of 1939, the Jews in Miriam’s town were transported to Ghetto Lodz in a journey lasting two days in freezing and inhumane conditions. During that horrible winter, Miriam’s family lived on a makeshift straw floor out in the street. A month later they were ordered to walk back at night to her hometown on the German border, where another Ghetto had been set up.

An intense, difficult time
In 1944, Miriam was transported to Auschwitz-Birkenau, a place that she tells is impossible to put into words. Both the initial chaos on arrival and the ensuing months surrounded by death are beyond the realm of human language. The camp was liberated in the spring of 1945, and Miriam would begin her journey to Palestine (the name of the British Mandate territory at the time). Miriam’s parents and most of her siblings did not survive. Only Miriam and one sibling survived.

Dancing ecstatically
Following the end of the war, Miriam took a ship called the ‘Biria’ in the direction of Palestine, with the dream of building a new home in a Jewish homeland. The conditions on the ship were very tough. The day that the State of Israel was declared, Miriam recalls dancing ecstatically on the streets. After so many years of living a nightmare, the dream of the Jewish people had finally been realised. During her time in Israel she has also been able to see her family grow, and is now a proud mother of 3, grandmother of 9, and great grandmother of 7.

Show your Christian love
Miriam has been a resident of the ICEJ Haifa Home for Holocaust Survivors for the last 2 years. Visit icej.org.za/haifa-home/miriam to read her full story and watch a 2 min video to hear first-hand what living in the home means to her. Be a blessing today and show your Christian love and support to Miriam and other Holocaust Survivors by donating online at: icej.org.za/bless