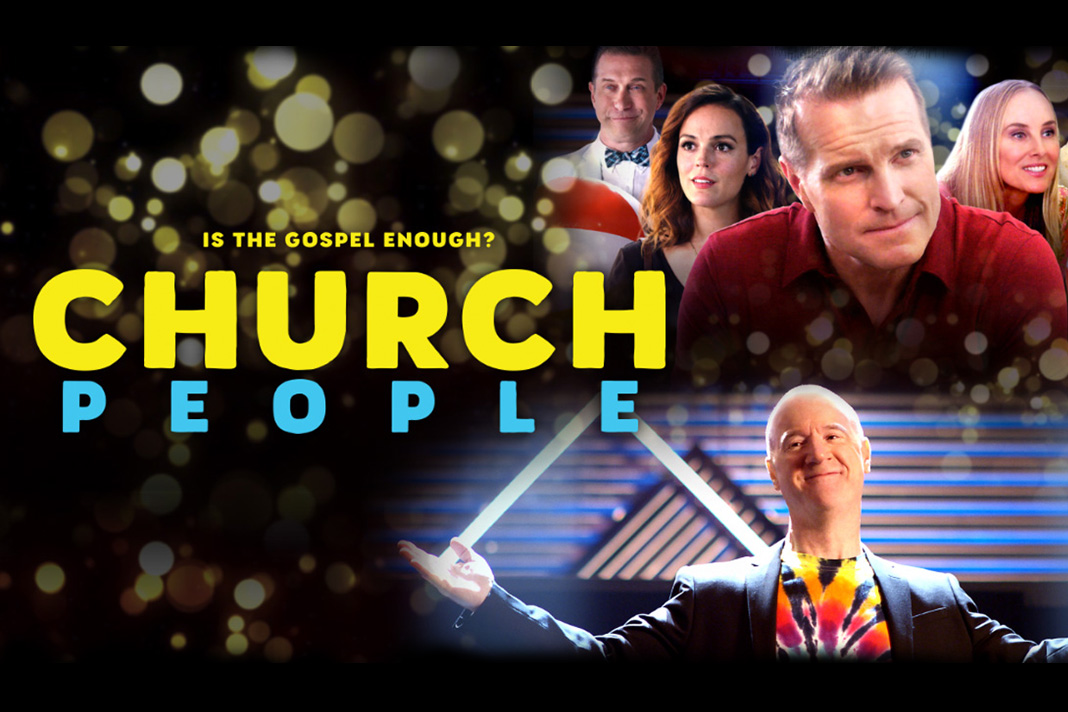 The comedy is the first feature film from director Christopher Shawn Shaw and comedian and author Thor Ramsey and centers youth pastor Guy Sides (Ramsey) who scrambles to stop the head pastor from performing an actual crucifixion on their Good Friday service to attract members.

One of its chief financiers is MyPillow CEO and Trump supporter Mike Lindell, and it works as a time capsule of filmmakers’ anxieties just prior to Trump’s election.

Christian comedies are a rarity in the faith-based film industry. Since the explosion of the Christian film industry in the early 2000s, Christian films have been almost exclusively inspirational melodramas like The Kendrik Brothers’ Fireproof, The Irwin Brothers’ I Can Only Imagine, and Pureflix’s God’s Not Dead. Attempts to make Christian comedies have typically ended in both commercial and critical failure, such as Believe Me (a genuinely great film) and Dallas Jenkins’ The Resurrection of Gavin Stone.

The filmmakers behind this film have a similar take. Ramsey, the film’s star actor, believes Christians hold a misconception that comedy means they’re taking faith lightly.

“I would say in the world in general, people don’t get satire very well,” Ramsey told Religion Unplugged. “They don’t understand satire. So it’s hard to do satire.”

But Shaw believes that Christians should reconsider any misgivings they have and embrace comedy more.

“When you laugh, it breaks the ice. It breaks down the walls,” he said. “And so I think there’s a powerful redemptive arc and message through the movie. And one of the ways you can get a poignant message across is through comedy because you’re tearing down the walls that we’ve built up around our hearts.”

The film has received positive buzz in Christian circles. The trailer has over 1.6 million views on its Facebook page. The film was released as a Fathom event March 13-15 and broke into the top 10 highest-grossing films of the weekend per-screen average. Now the film will be available for a limited amount of time to stream via the film’s website starting March 22.

“You can only satirize what you love because when people satirize things they don’t love it comes across as mean,” Ramsey said. “It is a very, very, very gentle rebuke of a kind of mindset within the church. It’s a critique of the marketing driven church in one sense.”

Ramsey’s friend told him once that he’d seen a church advertise that they were doing an actual crucifixion for a Good Friday service (the Friday just before Easter where Christians observe Jesus’ death before his resurrection). It turned out not to be true, but the concept sparked the idea for Church People.

“Everything in the movie, pastors have done,” Ramsey said.

He said it reflects a larger problem in evangelical churches, in which pastors feel they have to outdo themselves or pull off ever greater stunts in order to keep their churches thriving.

Neither Ramsey or Shaw are strangers to the evangelical world or the faith-based entertainment culture. Ramsey is a longtime Christian comedian who starred in comedy specials like the “Thou Shalt Laugh” series and the comedy show “Bananas,” as well as the author of several books, including “A Comedian’s Guide to Theology.” Shaw got his start in film through making short films at Christian film festivals. But the two of them have been making short films together on the film festival circuit for many years — Shaw as director and Ramsey as screenwriter and star — for over 10 years.

“I was connecting with comedians because I was watching Thor on ‘Bananas’ comedy. Because I felt like the Lord was doing something in my heart and I needed to laugh,” Shaw said.

They began collaborating on short films together at festivals like One Nightstand, Wireless, and Skip Listening (which they have a feature film script they hope to develop after the success of Church People).

Both of them had the same vision of making the kind of Christian film that doesn’t typically get made — where the story comes before the message.

“I never start a story with, ‘What’s my message?’” Ramsey said. “You begin with the story, and if you’re Christian, your Christian worldview should come out of the story.”

But Ramsey plans to remain in the world of faith-based films.

Church People took a decade to make, most of which involved extensive financing efforts. Most notably, actor Stephen Baldwin began supporting the project in 2013. The filmmakers believe that, while maybe not as groundbreaking now as it would have been when they started, Christians have since developed a greater hunger and appreciation for faith-based comedy.

The timing of the film’s release did add interesting political wrinkles to the film’s commentary. A critique of evangelical subculture made by White evangelicals is particularly interesting today when White evangelicals face great criticism and scrutiny for their statistically significant support of former President Donald Trump and a race reckoning within the largest Protestant denomination in the U.S, the Southern Baptist Convention.

Church People gives us a chance to see what White evangelicals criticize about themselves and how it lines up (or doesn’t) with outside critiques of its culture.

Progressive Christians and their secular counterparts will surprisingly find themselves resonating with much of the satire of evangelicalism in the film. The lead pastor’s obsession with spectacle and showmanship and ignoring the harm his antics will cause the vulnerable, while attacking fellow Christians who defy him will remind many all-too-closely of President Trump and his supporters in church leadership. The fact that this critique comes from Trump-supporting evangelicals shows opportunities for common ground and a basis for conversation on how American Christian culture can move forward positively.

That said, we shouldn’t make evangelical politics a bigger part of the film than it is. First and foremost, this is a comedy that is meant to be enjoyed.

So, how good is “Church People”?

To put it simply, “Church People” is among the best of Christian comedies and about average when it comes to overall comedies. Unlike most Chrisitan comedies, it focuses on the laughs more than the message and is actually very often quite funny. That said, it still suffers from the frequent Christian film problem of making too much of the story incomprehensible or unrelatable if you don’t have extensive personal experience with Christian subculture — particularly its themes around the Gospel, the central Christian message that Jesus came to save us all as sinners.

Ramsey is great as a constantly exasperated and sarcastic youth pastor who tries to keep the silly pastor and other church congregants from hurting themselves or driving him insane. Erin Cahill is a great deadpan foil for Ramsey as Carla Finney, his love interest. Clancy McCartney is charming as Blaise, an overly-enthusiastic new Christian. Michael Monks feels goofy yet grounded as Pastor Skip. Stephen Baldwin is great as a quirky-yet-wise greeter Chad Chase. Watching these characters play off each other the way that real congregations do is often the best part of the film.

On the flip side, the comedy stumbles most often where the jokes feel contrived and don’t feel natural — for example, Joey Fatone’s otherwise charming Tino constantly singing rather than speaking. Likewise, the drama suffers when the conflict feels contrived, like the typical “third act breakup.” Thankfully, these tend not to last very long, and the quick and intentional subversion of them is often the funniest stuff in the movie. (For example, two women look like they’re going to have an annoyingly contrived misunderstanding in a laser tag arena, and it is quickly solved.)

But the biggest missed opportunity of Church People is not with its humor but how it stumbles to develop properly its main character and themes.

Guy’s primary character motivation is to preach the Gospel and his primary conflict is his frustration that the church is walking away from that. But we never understand why the Gospel is important to him. That leaves us feeling more distant from Guy and his frustrations with people not getting the Gospel.

It also is a missed opportunity because we live in an era where most people don’t really understand why the Gospel matters, so showing us why it matters to a particular character we care about (rather than just reciting it) would be a really helpful and non-preachy way of re-introducing it to our society. The irony is, the film does have a reason for Guy to care so much about the Gospel: he messed up in his past in a big way and needed to be accepted by God and changed by him, before he deserved it. But this revelation comes far too late in the movie, and when it does come, the movie never connects that to why he’s passionate about the Gospel.

These missteps are especially unfortunate because the payoff is really, really good — particularly for Christian audiences. When the church and pastor betray Guy near the end of the film, it’s in clear violation of the principles of the Gospel they claim to affirm — showing that Guy is right that they’ve lost sight of the Gospel. And the movie’s climax is one of the best visual representations I’ve seen of an entire congregation of people repenting of their idols and the things that give them value and instead trusting in Jesus. If the filmmakers had landed the set up for this payoff, it could have been truly sublime.

Both Shaw and Ramsey are pleased with the response so far and hope this will get some of their future projects greenlit. Ramsey also hopes that this will encourage Christian films to make more honest art going forward.

And, just like youth pastor Guy Sides, the big truth they hope people get from the movie is the Gospel.

Church People will probably not appeal to non-Christians who don’t relate to the evangelical culture being satirized. But for Christians looking for Christian comedy to step up to the plate and deliver the mix of humor and faith we’ve been missing — “Church People” is an answer to prayer.