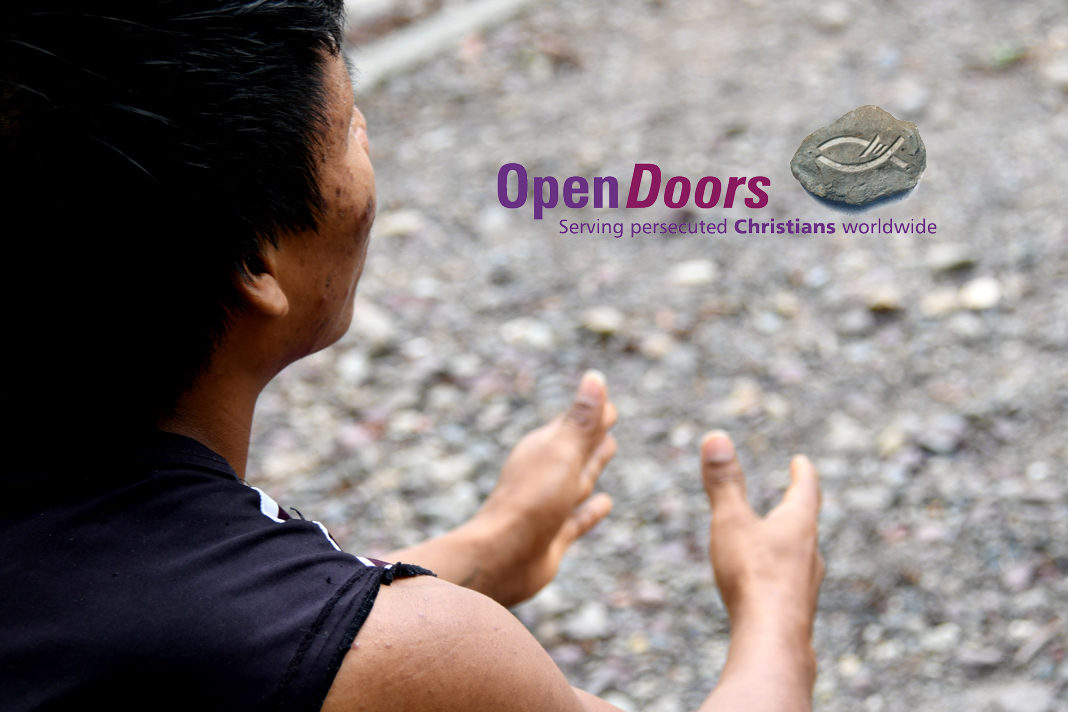 As a child growing up in Colombia, Abraham* dreamed of studying, working and helping his family. It was a dream impossible to realize in a region where children from a very young age are forced to carry guns and kill. Fortunately for Abraham, with God, nothing is impossible. And what was just a dream back then is now becoming reality, thanks to the support he has received from the Open Doors Children’s Center.

At first sight Abraham seems to be a serious and distant young man. His big, strong hands reflect the hard work of the field, where he works part time. However, a brief conversation is enough for the friendly character and broad smile of this 18-year-old to break through. A smile that was almost lost, as thousands of young Colombian lives have been lost, in a war that, to date, has claimed more than 8 million victims.

Abraham arrived at the Open Doors Children’s Center in Colombia back in 2010. He was a fearful child fleeing war and the threat of forced recruitment into the guerrilla movement. His family also suffered religious persecution from indigenous leaders, who criminalize Christianity with punishment, expulsion, expropriation and forced labor. Even today, being an indigenous Christian in Abraham’s ethnic community is synonymous with rejection and persecution, because it is still considered a threat to the survival of indigenous peoples and their animistic worldview.

Within the region of Colombia that Abraham grew up, children between 10 and 14 years old were often kidnapped and taken away by illegal armed groups. Children were forced to suffer all kinds of harassment, from sexual violence to physical and psychological torture, all in order to make them into ‘war machines’ capable of killing and being ready to die.

Children were recruited by the guerrillas and paramilitaries as child soldiers. Abraham explained that;

“the armed groups forced all families to send one or two children to the war. Families that did not send their children ran the risk of being killed themselves. I was on the guerrilla lists to be recruited. My future was to hold a gun”.

The story of the persecution of Abraham and his family began in 2008, the year in which Abraham’s father Rutilio* met Jesus through a group of courageous missionaries who, in the midst of the intense armed conflict, decided to go into the deep and dense jungles of the Colombian Pacific region to evangelize the indigenous ethnic groups of the area.

Although, in theory, Colombian law promotes religious freedom, in a large number of indigenous communities Christianity is penalized and punished since it is seen as a direct attack on the ancestral, shamanic and cultural principles that govern these communities.

After his conversion, Rutilio was forced to attend a trial where, through force and violence, they tried to make him renounce his faith. After he refused to do so, he was made to do forced labor for the entire community. The combination of all these factors caused Abraham to be sent secretly to the Children’s Center – a place where he could study, and be safe from war and persecution.

“I remember that when Abraham arrived he was a quiet and very fearful child. His drawings were often violent. He was drawing the weapons of war familiar to him: guerrillas in uniform and sad faces. His drawings were reflections of everything he had experienced,” said Pastor Alberto* Director of the Open Doors Children Center.

The process of Abraham’s readjustment was not easy. However, immersed in an environment of biblical teachings, the company of other children, and the care of tutors and teachers, Abraham found a place where he could feel safe. It became a refuge where talent emerged that Abraham did not previously know he possessed.

He became a great musician, learning to play instruments, such as the lead and bass guitar, the piano and drums. Music became the main vehicle of expression for Abraham. The boy whose future was to hold a gun today holds a guitar and sings praise to God in the company of others just like him at the Children’s Center.

When Abraham finished his secondary school studies, and, thanks to his talent and effort, he managed to win a scholarship to study international trade at university. This young man, now 18 years of age, wants to be a skilled professional, able to provide support and development to his indigenous community. Thanks to the scholarship, Abraham is able to continue living at the Children’s Center. As well as his university studies, he wakes every morning at 5am to take care of the farm animals at the center. And, in the late afternoons, he teaches the younger children about the work and responsibilities of the farm.

The farm at the Children’s Centre

Abraham knows only too well that there are still many things to learn. He knows that God is always with him, as well as the prayers of Open Doors supporters from around the world. To all these people, Abraham shared the following message:

“It is an honor for me that you pray for my life so that God will give me the courage to follow my path. You are gifts from God. Your prayers are a gesture of love from the Lord.”