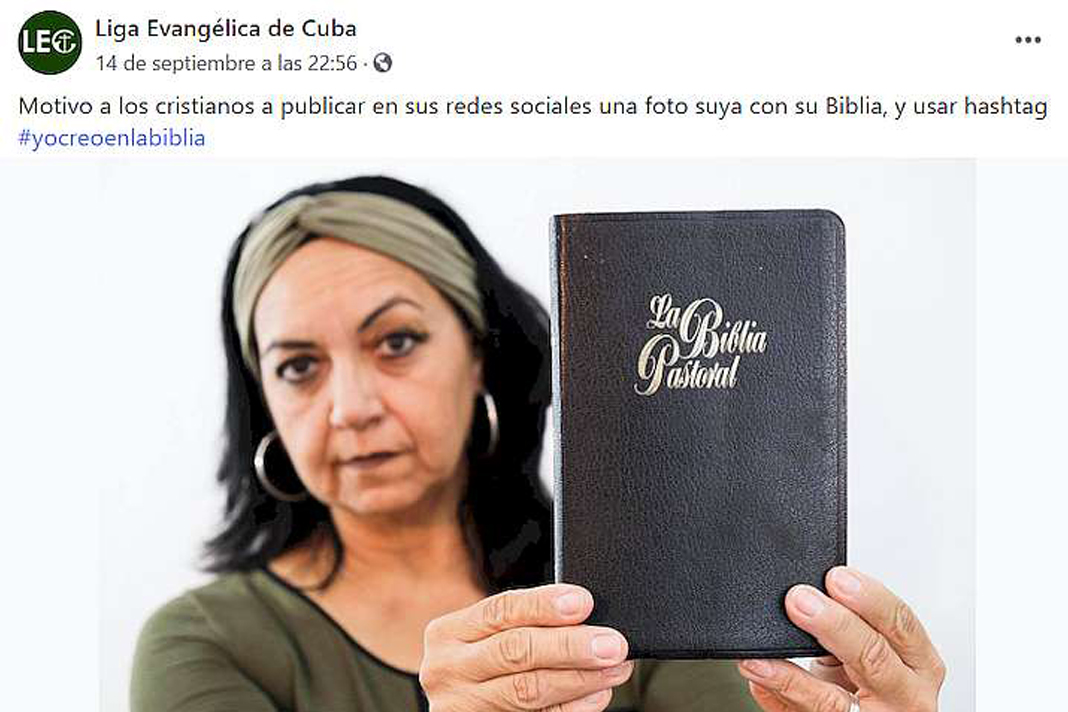 A Cuban pastor started using it on social media, after a pro-regime theologian appeared on national television denying the miracles of Jesus Christ.

The hashtag #YoCreoEnLaBiblia (I believe in the Bible) has become a trend on Facebook in Cuba, since Pastor Álida León launched it.

León is president of the Evangelical League of Cuba, one of the largest denominations in the country. She challenged other Facebook users to accompany the hashtag with a picture of them with a Bible.

This happaened after the Reverend of the Theological Seminary of Matanzas, Reiniero Arce, appeared on national television on Sunday denying the miracles of Jesus.

Asked in the program Passage to the Unknown if he believed in the miracle of the multiplication of the loaves and fishes, Arce hesitated before saying that the true miracle was “the solidarity of the boy”.

Arce used to be the leader of the state Cuban Council of Churches (CIC), and is currently a manager of the Matanzas Theological Seminary, known for its affinity with the social doctrine of the Cuban regime.

That is why many denominations have left this historic seminary, which was founded before the 1959 Revolution.

Cuban evangelical leaders response
The divinity of Jesus is one of the pillars of Christian doctrine. Miracles are one of the signs of that divinity. That is why, in addition to Álida León, several representatives of Cuban evangelical churches also joined this initiative.

The Cuban evangelical leader Israel Matos, who lives in the United States, pointed out on Facebook that it was “a shame that this program chose an interviewee who does not seem to believe in the inspiration of the Bible, in its infallibility”.

“Nor does he shows to believe in the testimony of the Apostles. Jesus himself questioned the unbelievers in the synagogue of Capernaum, and dismissed those who wanted to make him king. Dear Taladrid and Arce: Jesus’ question, just after multiplying the loaves and fishes, walking on water, and explaining his Father’s will, remains the same: Who do you say I am?”, he added.

Adrian Pose, a pastor in Marianao, Havana, sees in Arce’s response part of the so-called liberation theology, which apparently tries “to dismantle the so-called ‘religious fundamentalism’, by which Christians in their freedom of conscience defend the traditional family and oppose abortion and cultural Marxism”.

Pose, a member of a network of churches known as the Apostolic Movement, believes that the vision of the pro-regime churches “does not represent the majority of Christians at all”.

The Cuban government restricts the registration of new religious groups, such as the Apostolic Movement, despite having thousands of members. Pastors of this denomination recently offered the Cuban authorities the chance of freely distributing a shipment of humanitarian aid that had arrived from the exile. But the authorities did not allow the aid to leave the port of Mariel.