The Department of Basic Education’s (DBE) misinformation and deception campaign has kicked into high gear (with guidance from UNESCO), declaring the public’s concerns with “Comprehensive Sexuality Education” (CSE) a result of “fake news.” DBE spokesperson Elijah Mhlanga said “The outcry around sex education is based on misinformation.”

Mr Mhlanga also said, “Information pertaining to CSE was published on the DBE website”. The only problem is what the DBE (selectively) published on its website is not CSE. It’s a sanitised version of the alleged “sex education” program – designed to mislead and deceive the public.

The question is, why is the DBE releasing information about CSE now if it received tons of letters from concerned parents, Church groups and teachers over the past few years requesting they clarify the content? They ignored all requests and refused to meet with civil and religious leaders to allay its, and the fears of parents and teachers groups. 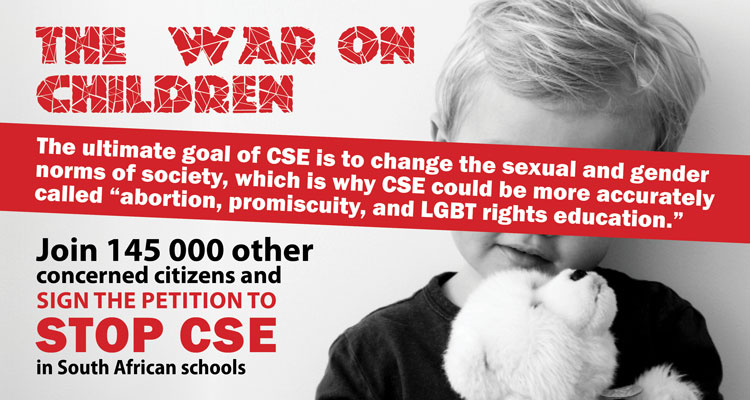 The DBE’s statements are also dishonest and contradictory. In one statement, the DBE said “CSE is not new, it has been part of the Life Orientation curriculum since 2000. In other statements, the Minister of Basic Education, Angie Motshekga said, “CSE pilot programs were run in certain provinces and will be implemented countrywide in 2020.”

The Minister also said in Parliament, “Parents concerned by CSE can opt out of the program provided they obtain an alternative curriculum.” DBE spokesperson, Elijah Mhlanga later contradicted this and said, “parents of kids in public schools cannot opt out.”

What is the truth? If CSE was part of the LO curriculum since 2000, why did the Minister run pilot programs in 2017/18/19 and plan to fully implementing CSE in 2020? Why do parents have the option to “opt out” of CSE now if, like the DBE claims, parents were previously informed about the content and found nothing wrong with it?

Reliable information gathered from the “UN Family Rights Caucus” reveal the South African government only signed on to CSE at the UN in 2015. That’s why a UN agency, UNESCO is tasked with implementing the program in South Africa’s schools – not its own citizens!

Apparently, millions of US dollars is pledged to governments who agree to implement this highly controversial program in their countries. The funds comes exclusively from pro-abortion and pro-LGBTI groups like US billionaire George Soros, Open Society Foundation.

The DBE has still not explained why it imported a so-called “sex education” program from the UN. Why did the DBE not consult with South African parents and teachers groups to develop a program that addresses the unique challenges facing South African children?

If the DBE was honest and transparent from the start, civil society groups would not be in an uproar today. A growing number of parents and teachers groups across the country have declared their intention to boycott CSE because of its diabolical content.

More religious groups are also speaking out against CSE. Government’s refusal to consult with its own citizens while working closely with foreign agencies was condemned by the Eastern Cape Pastors Network. Accelerated Christian Education (ACE) also issued warnings to their school network. I am waiting for a statement from the CURRO school network.

I was alerted about the origins, content and agenda of CSE in 2015. I participated in an international documentary, “The War on Children” that exposed the real agenda behind this diabolical program. CSE is not sex education. It’s sexual indoctrination of innocent children designed by global abortion and sexual rights radicals to change the sexual and gender norms of SA society.

CSE sexualizes children at young ages. It uses images and the language of “sexual rights” – similar to sexual predators – to groom children for sexual exploitation and abuse.

There are tons of global research and studies that prove CSE does more harm than good. CSE is the most dangerous state sanctioned attack on the innocence of children in South Africa.

Please support and promote the “March For Family” in Cape Town on Sat 30 Nov 2019 at 10am. Families led by City Pastors will march to Parliament praying for SA. We will deliver the Letter and your signatures to government calling for the cancellation of CSE in South Africa.