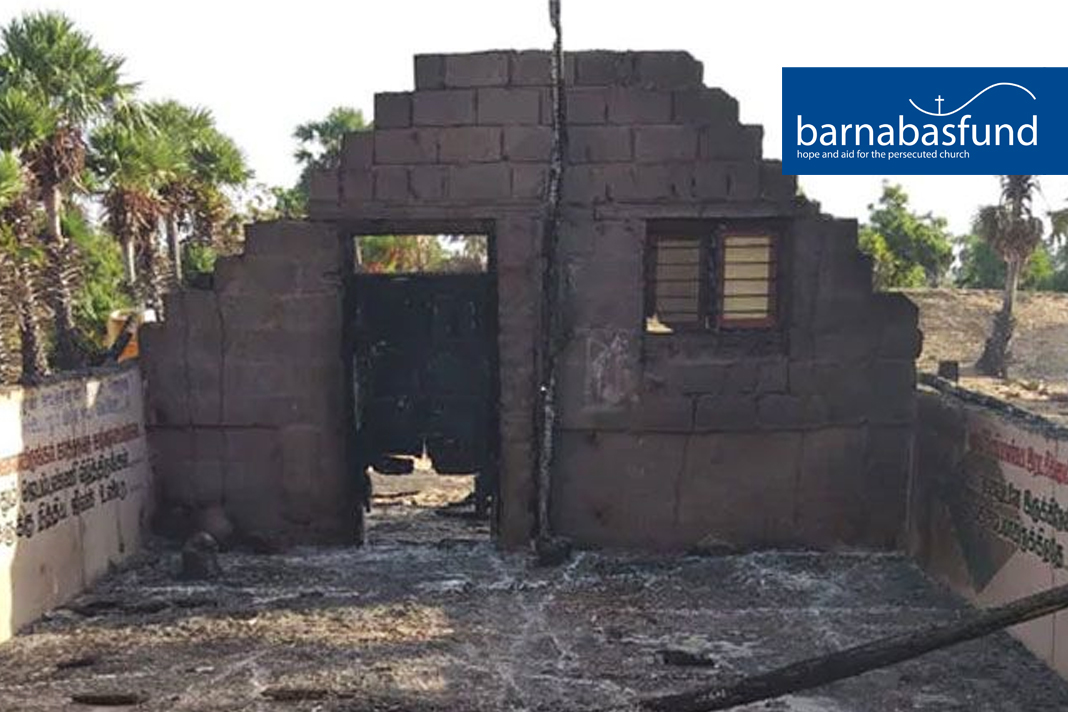 Pastor Ramesh Jebaraj says he forgives the arsonists who destroyed his church in Tamil Nadu State, southern India, in the early hours of 13 June.

The partially-sighted pastor who runs the Real Peace Gospel church in rural Vayalur said, “We don’t suspect anyone in particular. People of all faiths come here to pray. Someone may have done it out of jealousy, but we forgive them.”

Police are investigating the blaze that destroyed the thatched roof of the church, built ten years ago, and reduced the building to a burnt out shell. The charred remains of a drum, microphones and a table could be seen in the ruins.

No services had been held in the church since the nationwide coronavirus lockdown began in March. Pastor Ramesh said, “There is no possibility of any electrical short circuit. We use only rechargeable batteries during service and take them back.” The building was not connected to a mains power supply.

Sajan K George, president of the Global Council of Christians of India (GCCI), believes the fire was an arson attack, adding that extremists have continued to sow fear among Christians in Hindu-majority India, despite the lockdown. “We are alarmed by this attack while the government is grappling with the pandemic crisis,” he said.

“India is a secular democracy, and Christians are no threat to anyone. We represent only 2.3 per cent of the population, and declining. Despite this, radical groups continue to attack and intimidate Christians, burning their churches,” the Christian leader added.

In May, the Alliance Defending Freedom India Trust (ADF) reported that at least three Christian families in India’s Chhattisgarh State had been prevented from burying their loved ones by religious extremists as persecution and mob violence against believers continued during the Covid-19 lockdown.

ADF lawyers said they had also received reports of six incidents of targeted violence against Christians in Chhattisgarh State and three incidents of anti-Christian violence in Jharkhand State in April. In neighbouring Odisha (formerly Orissa) State, a 14-year-old Christian boy was tortured and murdered by local extremists in his village, in Malkangiri district, in June.

The Evangelical Fellowship of India (EFI) said the number of recorded incidents of violence and hate crime against Christians rose in 2019 to 366 incidents, compared to 325 in the previous year. EFI’s annual report, published in March, revealed Tamil Nadu State had the second highest number of anti-Christian incidents in 2019, with 60 attacks, behind Uttar Pradesh State, which recorded 86 attacks.