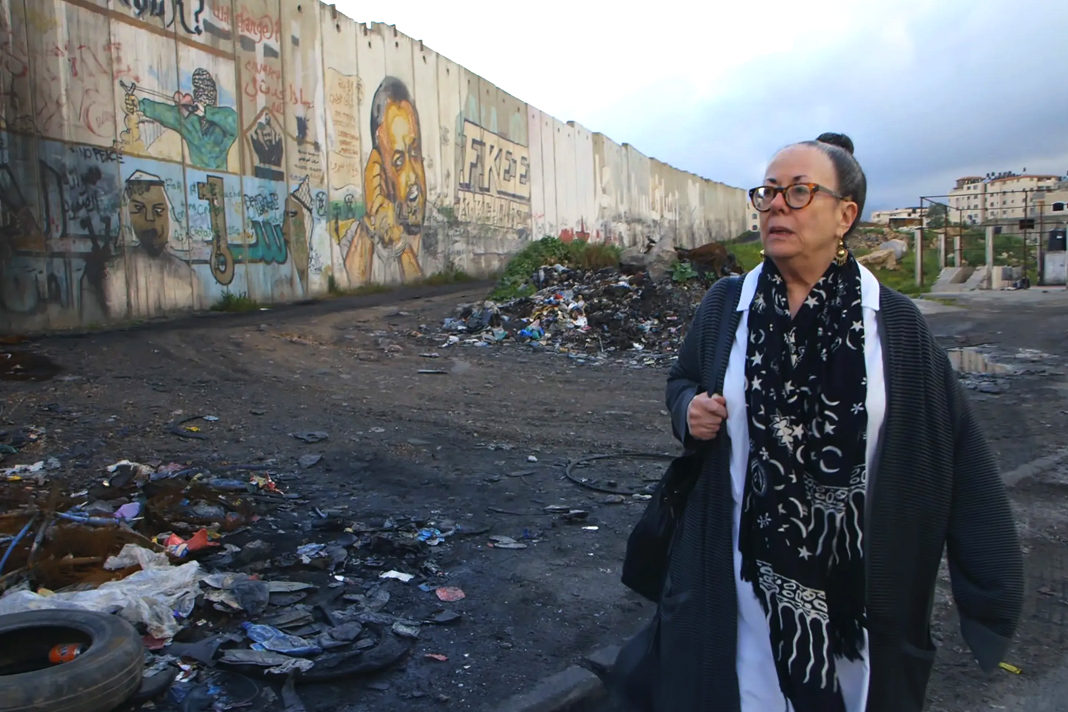 When Ofra Bloch started making her film Afterward, she planned to explore collective trauma from the perspectives of perpetrators. She embarked on a journey through Germany to meet with descendants of Nazis, never expecting she would end up in the West Bank to listen to Palestinians.

Born in Jerusalem and raised among Holocaust survivors, Bloch was raised with the idea that Germans were enemies of her people, as were the Arabs of the Middle East, whether they lived next door or beyond Israel’s borders. Now a psychoanalyst and trauma specialist living in New York City, Bloch wanted to better understand perspectives from the culture that tried to exterminate the Jewish people.

As she listened to the children of German perpetrators, she discovered that their answers to her questions were raising new questions about her own position in trauma’s cascade through the generations since the Holocaust.

“How could I, a Jew who had so much to say about the past, have been silent all this time about the trauma of the present?” she says in the film.

During one encounter, Bloch sits with an elderly Palestinian man in the ruins of a home in the vacant village he was born in. His family fled as Jewish forces approached, he said, and his infant brother was killed by a soldier’s bullet. He challenged the belief that Jewish people are God’s chosen people, saying that it goes against the idea that all people are equal.

Bloch said she believed that she had rejected any belief that Jews were morally superior to other people until she heard about the kidnapping and murder of Mohammed Abu Khdeir, 16, in 2014 by three Israelis. They were eventually convicted of beating him and burning him alive, purportedly as revenge for the kidnapping and murder of three Israeli teenagers in the West Bank by Palestinian assailants weeks earlier.

Bloch said she initially felt shocked that Jews were capable of such an act. “And then it dawned on me that deep down, I had bought into the very narrative I had professed to deny,” she said.

In another conversation, Bloch listens to Samah Jabr, a Palestinian psychiatrist in East Jerusalem.

Bloch speaks with Palestinian residents of the Silwan neighborhood in East Jerusalem who are protesting Israeli settlers moving in under armed guard. Image courtesy of Obscured Pictures.

“Whenever Palestinians want to discuss the occupation, the Holocaust is brought up to silence them,” Jabr says.

For Jewish Israelis, that amounts to a violation of a “holy cow,” Bloch told NPR’s Leila Fadel. The suffering of the Holocaust is not comparable to what Palestinians are suffering, and any suggestion of such is gravely inappropriate, the argument goes. Bloch said that she responds that no person’s suffering is comparable to anyone else’s because suffering is not quantifiable, and that she hopes people’s hearts are big enough to care about anyone’s suffering.

Toward the film’s end, Bloch confronts the “very short distance between being a victim and becoming a perpetrator” as she reflects on the worldview she was raised with.

“Those of us who were born in the new state of Israel were raised to take on the identity of the new Jew who would never succumb to the enemy. On the one hand we held onto the victim identity, and on the other we claimed moral superiority because of it,” she says. “Such a state of mind is a permission slip to kill.”

Afterward premiered in late 2018 and made the rounds through the international film festival circuit until it began screening in select theaters this month. Bloch was on hand to take audience questions at screenings in New York City this past weekend, as she did when the film played at the Tel Aviv Human Rights Film Festival in Israel last month.

While she has heard criticisms, she said, responses have tended to be thoughtful and positive. Her hope is that her film can influence people to practice better listening by “surrendering to another person’s narrative,” she said.

The film bills itself as “set against the current wave of fascism and anti-Semitism sweeping the globe.” Religion Unplugged spoke to Bloch about how its message fits within humanity’s present moment.

RUP: With anti-Semitic rhetoric and violence increasing globally, do you have any reservations about this being the right time for Jews to put energy into listening to declared or perceived enemies?

Bloch: The power of anti-Semitism, bigotry, prejudice, and racism relies on using fear and ignorance in order to dehumanize the other. After all, when the “other” is regarded as less than human, there is permission to inflict pain and suffering. My documentary Afterward attempts to emphasize that “active listening” to the “other” is the most basic tool for fighting those ideas. Perhaps it is especially now, when anti-Semitic sentiments have been unearthed and are in the open, that we Jews can extend a hand to other groups of people who have experienced racism and are the recipient of similar hate, and join forces in a fight against the instigators who incite violence.

RUP: So you consider your film’s message instructive in the fight against anti-Semitism?

Bloch: Afterward advocates for active listening in order to put an emphasis on personal encounter with the other, even if that other is a declared enemy. It is definitely a challenge, but I think that if I were to speak with individuals who were marching in Charlottesville and chanting “Jews will not replace us,” and listen to their narrative and enter their experience, the act of listening would help to increase their capacity to listen to me. Most of those who marched have never met a Jew in their lives. When people know each other personally, it becomes harder to hate each other. Reducing ignorance through listening is an effective weapon to fight anti-Semitism.

RUP: The film seems to effectively step beyond the tropes and talking points where conversations about the Israeli-Palestinian conflict tend to get stuck. You simplify complex things without disrespecting their complexity. How did you get to a place where you could do that?

Bloch: In my work as a psychoanalyst, I often witness how the unprocessed trauma of the past lives on in the present for my patients and takes the form of becoming a legacy of hate and fear. This mindset becomes a breeding ground for approaching conflict as a rigid binary. The result is the creation of a hiding place from any complexity and a comfort zone where one can always belong to the right and just side, while everybody else is in the wrong.

Life experience taught me that this way is a blueprint for endless conflict with no end in sight, and the Israeli-Palestinian conflict is no different. No matter how tempting it is to stick with what we know, it is only when we rise to the challenge and learn to live with ambivalence and complexity that the beginning of dialogue between the sides can become a possibility.

RUP: In Germany, you interviewed the son of a former Nazi SS soldier. When you asked what he wanted his family’s legacy to be for his own children, he became emotional and paused the interview. We don’t hear from him any further on that point. Why do you think that question was so charged for him?

Bloch: Thomas and I have kept in touch after the end of the shoot in Germany, and he even flew to New York to attend Afterward‘s premiere at DOC NYC in November 2018. We did not continue that conversation that you are referring to, but it is my understanding that he was struggling with his own emotional ambivalence about his father, which he conveys so eloquently in the the film when he speaks of his father’s war scars as being exciting and symbolizing masculinity and at the same time being a source of disgust.

At the time, he was in the middle of a research project about his father’s Waffen SS unit. The people who volunteered for that unit originated in northern Italy and they chose to join the German side. Thomas wanted to better understand their choices and conduct at the time of war and during the aftermath. I know that he completed his research and has recently published a book about it, and that it provided him with some closure.

RUP: A commonly heard refrain about the Israeli-Palestinian conflict is that Muslims and Jews have been fighting for thousands of years. The implication is that the current political morass is the latest in an unbroken feud between these religious groups that is beyond our capacity to solve. How do you understand religion’s role in this?

Bloch: Religion of any sort might have the power to direct us towards peace, but more often than not, one encounters practitioners of the various religions who actually do the opposite when they cite their own particular God as they advocate for separateness and encourage fighting in battle for man-made ideas.