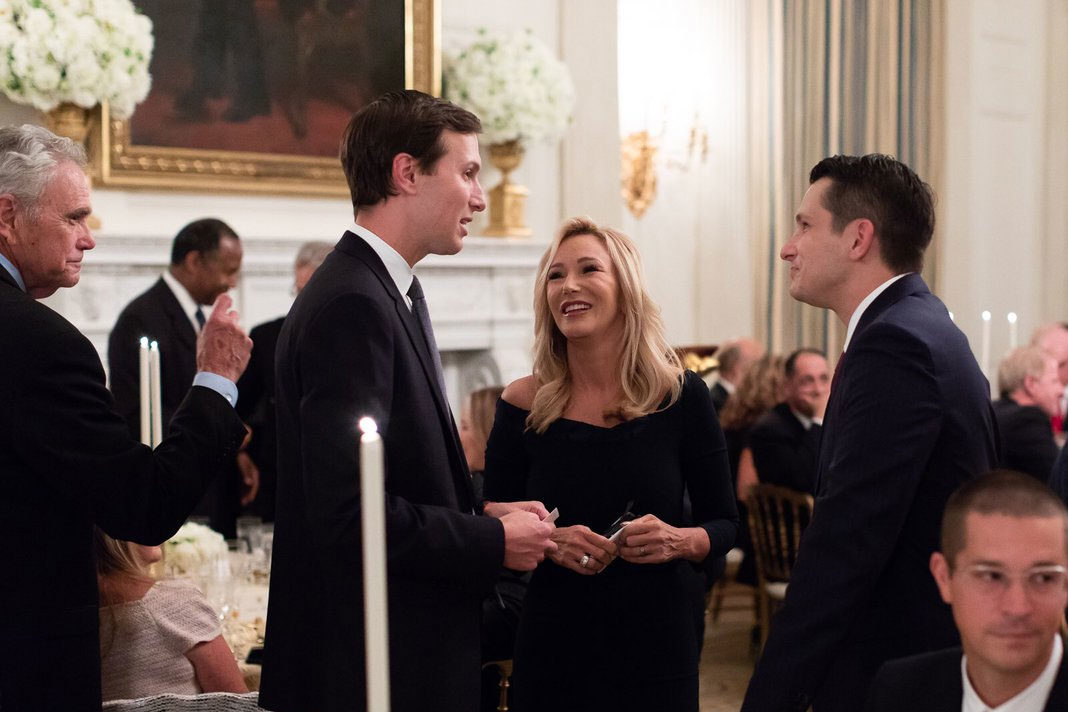 During the state-like dinner hosted by the first lady, Florida pastor and Trump’s closest spiritual adviser Paula White-Cain presented the couple with a Bible that she says was “signed by over a hundred Christians, Evangelicals that love you, pray for you.” ­­­­­­­­­­­­­

Inscripted in the Bible is the following message:

“First Lady and President, you are in our prayers always. Thank you for your courageous and bold stand for religious liberty, and for your timeless service to all Americans. We appreciate the price that you have paid to walk in the high calling. History will record the greatness that you have brought for generations.”

Speaking at the podium following Trump’s remarks, the 52-year-old White-Cain recited the inscription before the group of over 100 evangelical leaders and their spouses in attendance for the White House dinner.

Following the recitation of the inscription, she stated, “And if all of you agree with that, say ‘Amen.'” The crowd responded by saying “Amen.”

Hours prior to Monday’s dinner, about two dozen leaders who served on the initial Trump evangelical executive advisory committee during the president’s 2016 election campaign gathered in a conference room of the Trump International Hotel.

“We had a meeting of the original board members that go back to the election. We got together since it had been a while since we all got together and decided that we wanted to give them that gift (the Bible),” Georgia megachurch pastor Jentezen Franklin told The Christian Post Tuesday. “They asked all of us to sign it. Paula White had gotten with all of us and kind of [came up with] a general theme that she wanted to say and then we could sign anything we wanted to say.”

While some critics on the political left might criticize the last part of the inscription in the Trump Bible that reads “History will record the greatness that you have brought for generations,” former Southern Baptist Convention President Ronnie Floyd of Cross Church in Arkansas told CP what was meant by that line. ­­­­­­­­­­­­­

“That [line] is in relationship to what has already happened in the administration in these first almost two years. When you think about it, the president and the administration has been able to move matters forward on so many issues that all evangelicals are concerned about,” Floyd said, adding that he is referring to “conservative Americans who believe the Bible is God’s word.”

“Look at the commitment that he has had on the sanctity and dignity of human life,” Floyd added. “He’s forwarded religious liberty with great commitment and has refused the overreach of government that was going on continually, not only here but across the world.”

Floyd continued by listing other social conservative accomplishments of the administration — conservative judicial appointments, the relocation of the U.S. Embassy to Jerusalem, the promotion of international religious freedom and the president’s Rose Garden celebrations to celebrate the National Day of Prayer in 2017 and 2018.

“There is a lot to celebrate in that. Is it all perfect? No. Is a man perfect? No,” Floyd, who served as the president of the National Day of Prayer, said. “We are all sinners and fall short of the glory of God. We can celebrate those things that do have an opportunity to really have a generational influence.”

Not all of the evangelical leaders in attendance at the dinner signed the Bible.

Southern Baptist Convention President J.D. Greear, who received pushback for attending the meeting, clarified that he did not sign the Bible, nor was he asked to.

Greear was not included in the group of pastors who met at the Trump International Hotel on Monday prior to the dinner. ­­­­­­­­­­­­­

Franklin, the senior pastor of the multi-campus Free Chapel, explained that although political issues were discussed during the early meeting of Trump’s initial evangelical advisory council, the meeting eventually erupted into about 15 to 20 minutes of prayer in which the pastors took turns offering their prayers for the country.

“Somebody quoted this Scripture, ‘If my people would humble themselves.’ So then we just got down our knees,” Franklin recalled. “It just changed the atmosphere of the meeting from more kind of a structured meeting to ‘God, we really need you in our nation.'”