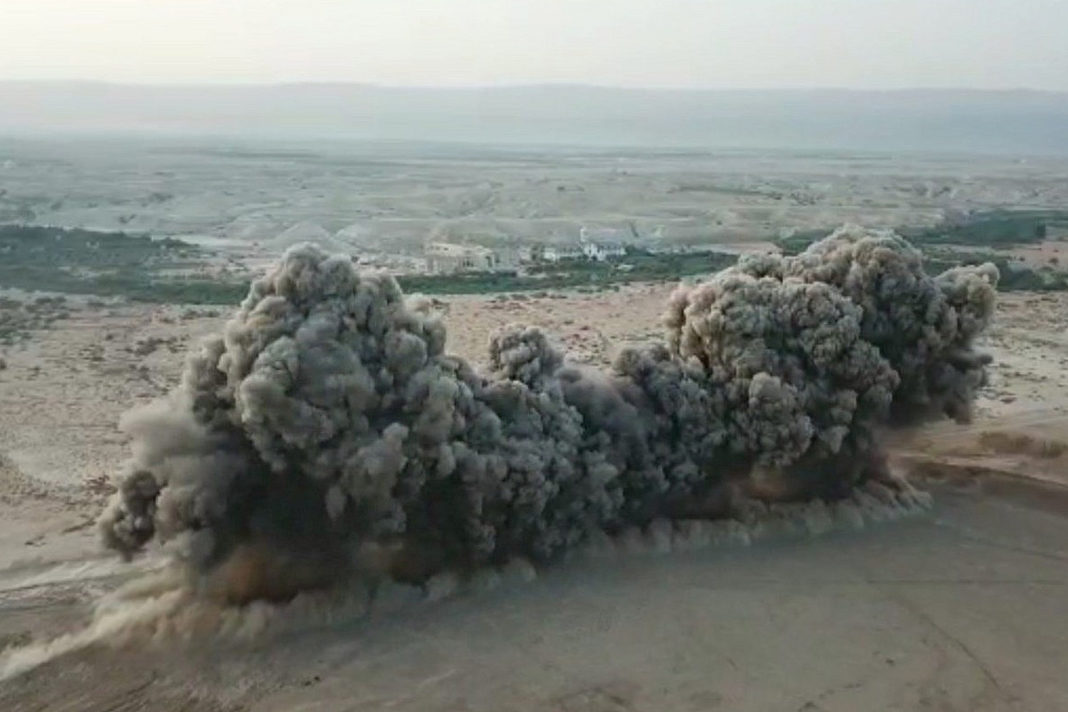 One of Christianity and Judaism’s holiest sites plagued by war between Israel and Jordan reopened for Epiphany pilgrimages in January after years of the Israeli government clearing the area of landmines.

This year, more than 20,000 Eastern Orthodox Christians flocked to the Qasr al-Yahud baptism site on the muddy banks of the Jordan River to celebrate Epiphany where, according to Christian tradition, Jesus was baptized by John the Baptist. For Jews, the site marks where Joshua bin Nun lead the 12 tribes of Israel to ford the Jordan River and begin the conquest of the Promised Land.

The Qasr al-Yahud (Arabic for “the Castle of the Jews”) is located 40 km east of Jerusalem and 10 km east of Jericho on the border of the Hashemite Kingdom of Jordan. It is one of the holiest sites in the Christian world and is home to seven church denominations.

On Jan. 18, the patriarch of the Greek Orthodox Church of Jerusalem, Theophilos III,  led a procession to the river, swollen by this year’s exceptionally heavy winter rains. The pilgrims attending represented the diversity of the church, from Israel’s Eritrean refugees to Syriac, Ethiopian, Coptic, Armenian and other Orthodox Christians.

Most Orthodox Christians follow the Julian calendar, which lags 13 days behind the Gregorian calendar. Roman Catholics observed the feast on Jan. 6.

The celebration was opened by a reception attended by Israel Defense Forces (IDF) Brigadier General Ghassan Alyan and sponsored by the Coordinator of Government Activities in the Territories and the Israel Nature and Parks Authority, which administer the holy site. The IDF and Israel Police provided security.

“The Civil Administration has made much effort to prepare for these important ceremonies, as part of its program to preserve freedom of religion and worship for all Christian denominations,” Jericho District Coordination and Liaison Administration head Lt.-Col. Eran Gross said in a statement. “Thanks to the ceremonies, we see a marked rise in tourism alongside a boost to the economy, for which I am thankful.”

Following the 1967 Six Day War in which Israel captured the West Bank, the holy site became a closed military area. After the signing of the 1994 peace treaty between Jordan and Israel, work began to clear the minefields surrounding the various churches. Similarly, Jordan began to develop tourism infrastructure on the east bank, known as Bethany Beyond the Jordan or al-Maghtas (Arabic for “baptism”).

Though the site, named the Land of the Monasteries, has been venerated since the Byzantine period 1,700 years ago, currently pilgrims may not cross the narrow river to worship at the churches that face each other in the two countries.

Beginning in 1968, the IDF seeded the area with more than 6,500 landmines and set booby traps inside the church buildings, fearing Palestinian terrorists would cross the narrow river and use the churches as a staging ground for attacks on Israeli settlements. The Jordan River is often only a few meters wide in some places.

In June, the Defense Ministry’s Israel National Mine Action Authority, the IDF, the international anti-mining organization HALO Trust, and Israeli supervision 4CI finished clearing the Romanian monastery, the last church to be cleared. Sappers are continuing to remove the remaining landmines scattered among the Land of the Monasteries and hope to completely open the area to tourists this year.

Date published: 04/02/2020
Feature image: The IDF Combat Engineering Corps released photos on May 26, 2019, showing the simultaneous detonation of 900 landmines during demining work at the Land of the Monasteries near Jericho. (Photo courtesy of IDF.)