Home News Promotion Of Transgenderism In Our Public Schools 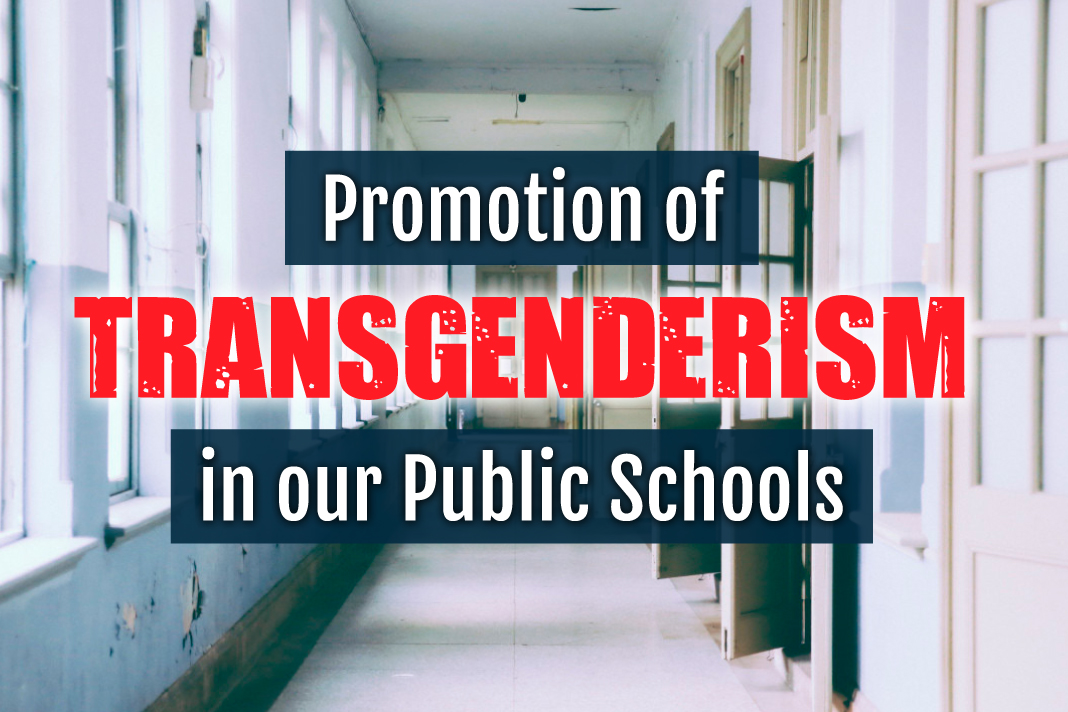 According to Genesis 1:27, God created human beings “male” and “female”. This scientific and self-evident distinction between the sexes had been recognised from time immemorial. Globally however, there is a growing trend of individuals who do not identify with their biological sex. These individuals represent the “T” in LGBT+, and are known as “transgender” people.

What exactly does this mean?
While some people genuinely feel trapped in the “wrong” body, “gender dysphoria” (until recently, a recognised mental illness) is very rare and occurs in less than one in 10 000 people. However, in recent days this has been conflated with those who identify as “transgender” and believe that gender is a social construct and/or fluid in nature. By subjective choice therefore, a biological man can be a woman (“trans-woman”) and vice versa; or both male and female (“bigender”); or no gender (“agender”); or somewhere in-between (“gender queer”).

A disputed ideology
As such, “transgenderism” is an ideology – and one that is disputed amongst top psychiatry experts, where an increasing number are warning against the long-term dangers of medical interventions to change sex. In particular, the treatment of minors with puberty blockers and cross-hormone treatment has serious, lifelong repercussions – both on the individual’s physical health and psychological well-being. A recent US study shows that 41% of transgender people attempt suicide, and people who have had transition surgery are 19 times more likely to commit suicide. Furthermore, a growing number of people who have had transition surgery regret it and want to de-transition to their original sex.

Schools are becoming the platform for peddling this dangerous ideology.

Major health and psychological risks
It is therefore imperative to think carefully about the major health and psychological risks involved in promoting transgenderism as an ideology in our society, particularly amongst learners of a young and impressionable age. In this regard, studies show that between 80% and 95% of minors who identify as a different gender, if allowed to go through the natural process of puberty, will outgrow this condition.

Schools are being pressured
Increasingly however, schools are becoming the platform for peddling this dangerous transgender ideology. Learners are encouraged to decide for themselves which gender they most closely identify with, and teachers and other learners are expected to accept that choice – even if it goes against their own conscience, belief, and opinion.

New guidelines by our government
An example of this is the Western Cape Education Department’s proposed Draft Guidelines on Gender Identity and Sexual Orientation in Public Schools, which can be found by scanning the QR code above. The purpose of these guidelines includes “promoting gender identity and gender expression”. If adopted, the Guidelines will apply to all public schools in the Western Cape and will potentially set precedent for similar Guidelines or policy in other Provinces.

Using preferred pronouns will become compulsory
In terms of the Guidelines, learners have the right to choose their first name. This implies that teachers and other learners will be expected to refer to that individual by his/her chosen name and personal pronouns, even if doing so goes against their own conscience or belief. Internationally, various teachers have lost their jobs for refusing to give into, what they regard as, “forced speech”.

Other notable inclusions to the guidelines
Dress code preferences also need to be accommodated, either by allowing boys to wear girls’ uniforms (and vice versa) or by introducing gender neutral uniforms. Learners can also bring a partner of choice to the matric dance, regardless of sexual orientation or gender identity. Boys may compete on girls’ sports teams (and vice versa). Internationally, this rule has been the subject of great controversy because of the unfair advantage it gives men (who are typically stronger) over women in nearly all sports, and which destroys women’s athletic opportunities. In some instances, male athletes who identify and compete in contact sports as females, have caused severe injury to their female opponents. Additionally, single gender schools may admit LGBT+ learners.

These guidelines will be adopted in our public schools unless we speak out!

Students will be able to choose bathrooms / hostels
Most concerning however, is the allowance to use toilets and changing rooms of choice. While “the sensitivity of other learners” is a consideration, the Guidelines state that transgender learners should not be excluded from any sleeping arrangements in hostels and/or on school excursions. This recommendation directly affects learners who may legitimately feel that their personal space is seriously compromised. Internationally, there have been various reported incidents of male paedophiles who – under the guise of being “trans-women” – have made their way into girls’ locker rooms and hostels.

Not an issue of equality
The issue is therefore not simply one of equality (treating all learners the same), but of learners’ privacy and safety which cannot simply be overridden in the name of promoting a particular ideology.

You Have A Voice!
Comments on the Draft Guidelines can be sent to the WCED Director: Policy Co-ordination at lynn.coleridge-zils@westerncape.gov.za

Date published: 08/07/2020
Nadene Badenhorst is an Advocate of the High Court of South Africa, and the Legal Counsel of Freedom of Religion South Africa (FOR SA).