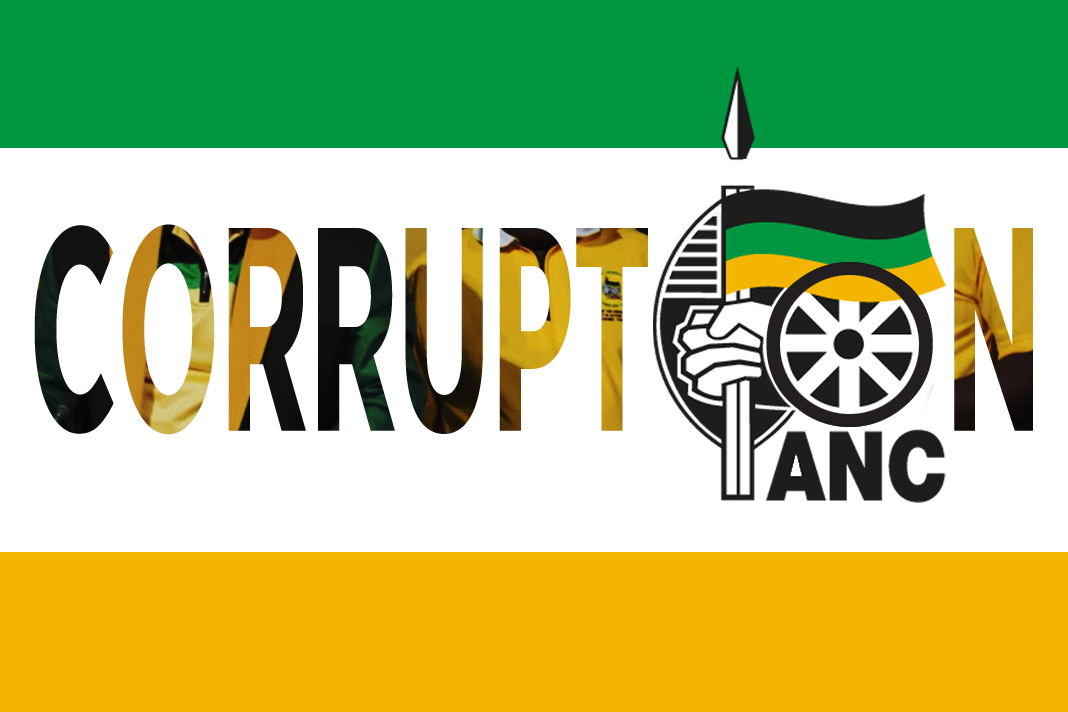 The recent death of ANC stalwart and last surviving Rivonia trialist, Andrew Mlangeni provoked an outpouring of praise from governing party officials. Most commended Mlangeni for his selfless service to the country, his honesty, and revulsion for corruption. However, what may have been lost on the ANC cadres commending Mlangeni is the fact that the movement he sacrificed his life for  now symbolises everything he reviled.

A once principled and world-renowned liberation movement, the ANC has become a mere shadow of its former self as a result of its shameless greed, cronyism, and maladministration. It’s once lofty ideals of providing “a better life for all” has given way to a self-enriching thieving frenzy that boggles the mind.

Corruption-weary citizens were given a faint ray of hope when Cyril Ramaphosa replaced the disastrous Jacob Zuma as State President in 2018. Ramaphosa’s “New Dawn” promise, however, turned out to be a non-starter due to relentless ANC corruption, theft, fraud, racketeering, and money laundering. Not even the Covid-19 relief funds – meant for the poor and jobless – were spared. While more than fifty percent of households struggle to feed themselves, billions have been looted by politically connected fraudsters.

A reported R22 billion of the R500 billion emergency relief budget is already missing. Ramaphosa assured the nation government will focus on fighting the Covid-19 pandemic. Who could have imagined that ANC corruption, and not lockdown transgressions, would undermine the fight against Covid-19? Incredibly, thousands of citizens were arrested for contravening lockdown regulations but not one single ANC cadre has faced justice for their despicable crimes against the people of South Africa.

The International Monetary Fund (IMF) granted government a R70 billion loan to supplement rapidly dwindling public coffers. South Africa is drowning in debt, which is expected to exceed 100 percent of GDP by 2024. Ramaphosa announced the creation of a multi-agency law-enforcement and prosecutorial task force to ostensibly combat the rampant corruption in his party. However, most analysts believe the announcement was meant to appease the concerns of international lenders. But why establish another mechanism to investigate corrupt public officials when mountains of Zondo Commission evidence – implicating ANC officials in corruption already exists? The Commission costs tax-payers almost R1 billion to date, with nothing to show for it.

Shortly after his announcement, Ramaphosa’s spokesperson, Khusela Diko, her husband and Gauteng Health MEC, Bandile Masuku were implicated in a R125 million PPE scandal. Almost every aspect of governance is now tainted with corruption. Sam Vukela, the Director General of the Department of Public Works was suspended for “inflating the costs of state funerals”. Apparently 3 funerals cost tax-payers R76 million! The Eastern Cape province, that already collapsed under ANC corruption and maladministration, is now implicated in a dodgy R160 million contract with ANC benefactor, Iqbal Surve, who himself is implicated in massive PIC linked corruption worth billions.

102 Companies in Gauteng alone are being investigated for tender fraud. Add the hundreds of billions looted during the disastrous “State Capture” scandal and the numbers are truly staggering. Personal Protective Equipment (PPE) was procured for frontline healthcare workers fighting the pandemic. Tragically, ANC PPE tender fraud has seriously undermined the fight against Covid-19 and rendered healthcare workers vulnerable to infections and even death.

To understand the scale of the widespread fraud and theft currently decimating South Africa, government loaned R70 billion in emergency funds to plug the holes. But ANC run municipalities wasted R32 billion in just one year with zero accountability for its actions.

The ANC facilitated the looting and destruction of every State-Owned Enterprise in the country. The once efficient and world-renowned energy utility, Eskom, was plundered by ANC deployees in less than 20 years. Today, Eskom is crippled by R450 billion debt and grossly overstaffed. Massive tender fraud by ANC bigwigs are still being uncovered.

A dodgy R14 billion contract was cancelled recently when corruption was uncovered. Overburdened citizens will be forced to pick up the tab for ANC malfeasance when the utility increases energy rates by 15 percent to recover R69 billion. South African Airways (SAA), also in business rescue – was run into the ground by successive ANC cadres like the grossly inept and corrupt Dudu Myeni.

Now government has allocated R10 billion in its umpteenth vanity rescue package – with no guarantee of success – while unemployment soars above 50 percent and starving children feed on wild plants to survive.

The ANC regime has proved it is incapable of governing in the best interest of the people. In a desperate bid to cling to power, the governing party often bows to union pressure. The ANC cunningly neutralised Parliament by prolonging the “State of Disaster” – a tactic that provides the “National Command Council” unfettered powers to implement whatever nonsensical regulations it deems fit – without having to account to anyone.

That’s why Churches are strictly limited to 50 people regardless of venue capacity, while casinos decide on numbers depending on capacity and taxis can be filled 100 percent because of threats – not science. Ramaphosa capitulated to teacher’s union, SADTU, by closing schools at their demand – despite children being more vulnerable on the streets than in the classroom. An estimated 3 million citizens lost their jobs as a result of the extended lockdown and nonsensical regulations, while corrupt and incompetent ANC officials enjoy undeserved and obscene tax-payer funded salaries and perks.

Ramaphosa appears to have little control over unaccountable party members. Many believe ANC Secretary General Ace Magashule actually calls the shots. Magashule is implicated in so much corruption and malfeasance it is mind boggling. The evidence linking him directly to the Estina Dairy Farm scandal is overwhelming. Yet, Magashule of “Gangster State” infamy remains untouchable. Now his two sons – previously involved with the Guptas – scored lucrative Covid-19 contracts.

The families of several other ANC heavyweights also won similar contracts. NPA head, Shamila Batohi was appointed with much fanfare and promise more than two years ago. Yet, not one single ANC official implicated in corruption has been arrested and prosecuted to date. Presumably, the ANC government ensures the NPA remains critically underfunded.

President Ramaphosa declared Gender Based Violence (GBV) the second pandemic after Covid-19. However, he ignores the pandemic of farm murders that grow more gruesome with every new case. GBV, femicide and farm murders continue to escalate despite government promises.

South Africa is blessed with some of the best farmers in the world. Their diligence and expertise provide the nation with food security. Farming is an essential service. Every farm murder therefore undermines South Africa’s food security and threatens the countries stability.

What prevents Ramaphosa from publicly condemning farm murders and allocating appropriate state resources to combat this scourge like he did GBV? The overall statistics of 58 murders a day proves the ANC regime is incapable of maintaining law and order. Law enforcement agencies, much like the ANC, are riddled with incompetence and corruption.

Despite the shocking weekly revelations of corruption and maladministration that deepens the misery of millions of citizens, the Christian Church appears unmoved. Precisely when Church leaders should be boldly speaking out against these criminal acts, they remain silent. The lack of courageous spiritual and moral leadership in South Africa has created a climate of ignorance and apathy that further entrenches the culture of corruption. The nation cannot sustain the wholesale plundering of public funds for much longer.

South Africa is also extremely vulnerable to Chinese Communist Party (CCP) economic colonisation. Other African nations have already suffered this fate. It is feasible that the country’s assets could be auctioned off to the CCP to provide a steady flow of funds for ANC looting. South Africa needs urgent intervention to avoid impending disaster. But it appears too few leaders are prepared to stick their necks out. The Church must urgently rise to meet this challenge.

What the country needs now is bold and courageous leadership that will inspire and mobilise a social movement for real and sustainable change.

The Constitutional Court has thrown corruption battered citizens a lifeline when it ruled the Electoral Act unconstitutional. The ruling provides citizens an historic opportunity to halt South Africa’s political slide. Honest and competent Independent candidates will be given a window of opportunity to break the stranglehold of self-serving political parties. However, this will require a massive civil-society effort to ensure talented candidates are identified, trained and provided support.

Independent candidates must firstly serve the will of their constituencies but must also co-operate to advance common values and principles to restore social cohesion and the integrity of governance.

The Church played a pivotal role in confronting and combating the evils of apartheid. It must again exercise its spiritual and moral authority to rescue the nation from the evils of state facilitated corruption and maladministration for the sake of our current and future generations. If we defeated apartheid together, we will certainly defeat this too. Righteousness exalts a nation.