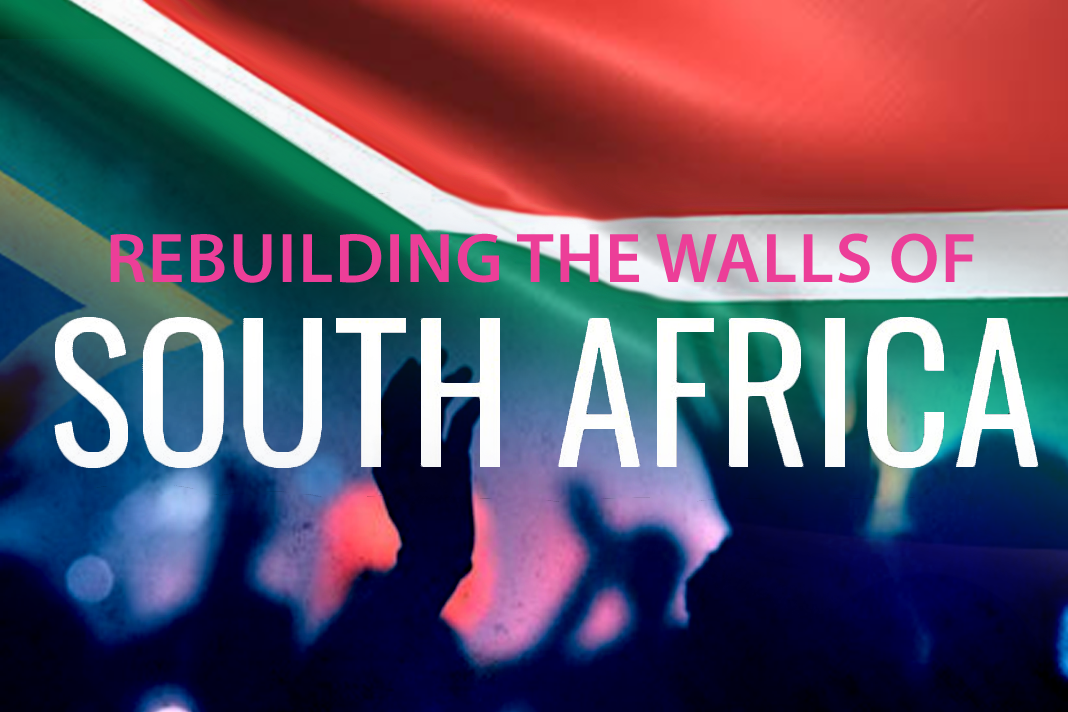 Rebuilding the Walls of South Africa is the theme for the online conference that will be hosted on Saturday 14 August 2021 from 18h00-20h00 SAST (South African Standard Time).

Trilogy Meetings
It is the third in a trilogy of conferences that the Lord had instructed us to host, two weeks apart from each other. The first one was the Heal Our land conference which focussed on praying for the Healing of South Africa. This conference was hosted on Saturday July 16, 2021 in line with the Heal our Land Prayer, Relief Fund, & Evangelistic Initiative started by Graham Power and his Global Voice of Prayer and Unashamedly Ethical team in partnership with several kingdom networks in such as Creator Inspired, IFSA, Jericho Walls, Global Forum of Women Entrepreneurs, Africa Enterprise and many others.

The second conference was hosted on Saturday July 31st, 2021 as we entered the eight month of the Gregorian calendar. The conference was themed “Releasing the sound of Victory & New Beginnings over South Africa” with apostolic and prophetic voices from the nations making declarations and decrees in line with Isaiah 43:19.

The last of the Trilogy conferences is the Rebuilding the Walls of South Africa which will be held this Saturday, August 14, 2021. Over the past weeks, the nation of South Africa has witnessed the unleashing of violence and anarchy that resulted in destruction estimated to have a R50 billion impact on South Africa’s GDP. In spite of this damage, South Africans remain hopeful and pockets of unity are beginning to grow across the land. Through much prayer, some of the fruits we can begin to see being released upon the people of South Africa is a new unity, a new resilience, and a new determination to rebuild the land, Nomakanjani! (no matter what). 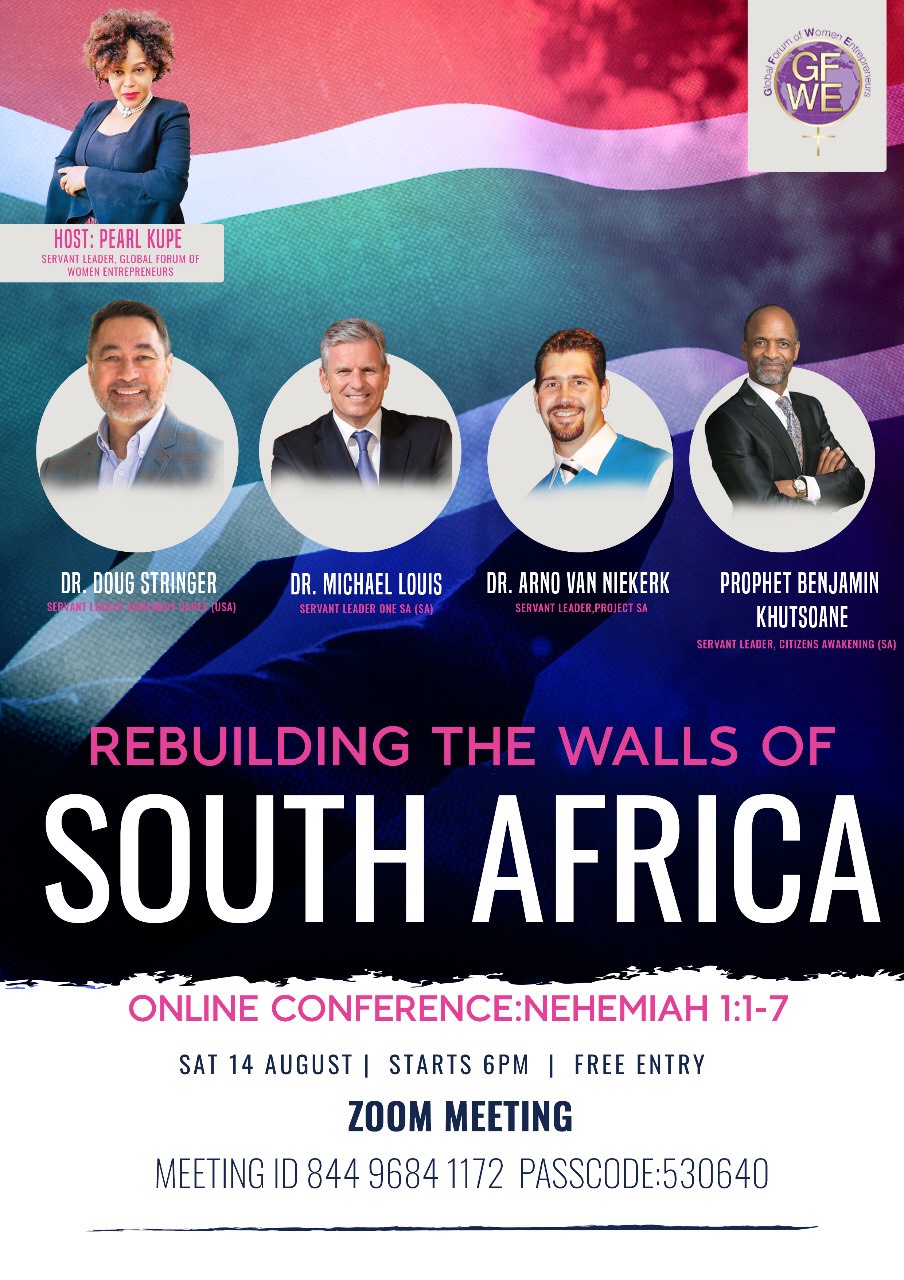 NEHEMIAH KE NAKO! (It’s Time Nehemiah)
This conference, along with other initiatives, is a call to mobilise, gather, and rally the Nehemiahs from all the provinces of South Africa and beyond South Africa into a time of rebuilding South Africa. We have mourned, prayed, made declarations, and now it is time to Rebuild! God is gathering His Nehemiahs to rebuild the walls of the nation. These are sons of God who carry a burden for the nation, a burden for prayer, and a burden to see the walls of the nation being rebuilt. Because they are sons of God, they will not rebuild according to the pattern of the world, but according to the pattern of the Kingdom, using the original blueprints of the Kingdom of God.

We are privileged to have as our speakers:
Dr. Doug Stringer (USA), is an author of several books and the servant leader of Somebody cares and Turning Point Ministries. Somebody Cares focusses on community development and transformation. As an Asian-American, Doug is also considered a bridge-builder of reconciliation among various ethnic and religious groups. Doug will be sharing on Leadership and rebuilding and talking about what kind of leadership is needed to rebuild in line with God’s kingdom patterns.

Dr. Michael Louis is based in Cape Town, South Africa and is the servant leader of One SA, a movement dedicated to uniting South African citizens into action and into active citizenry. He is also an attorney whom God used to initiate and win a precedent setting case that was decided by the Constitutional Court in 2020. This case has paved the way for every South African citizen to run as independent candidates in elections. Dr. Louis will be sharing some key principles for Rebuilding the walls of South Africa that relate to active citizenry, legislation and good governance.

Dr. Arno Van Niekerk is based in Bloemfontein, South Africa. He initiated a movement known as Christian Consensus which sets out some common principles around which Believers can gather and work around. He also started Project SA which focusses on raising Josephs, Esthers and Nehemiahs to work together for Kingdom purpose and expansion. Dr. Van Niekerk will be sharing some key kingdom economic blueprints for rebuilding the walls of South Africa.

Prophet Benjamin Khutsoane is based in Durban, South Africa and the servant leader of the Citizens Awakening movement, a movement dedicated to educating and provoking citizens into active and responsible citizenry. The movement is focussed on nation building and good governance principles that are based on Kingdom principles. Prophet Benjamin will be sharing on the Ekklessia’s (Churches) role in Rebuilding.

Host Pearl Kupe will be discussing the importance of Unity and Rebuilding.

Join us on Saturday, 14 August, 2021 for these important discussions.

Meeting login details:
The login details of the zoom meeting are: https://us02web.zoom.us/j/84496841172?pwd=aStDQms0OHF2Y2doSTkwZ05KSjNkZz09

Date published: 05/08/2021
Dr. Pearl Kupe is an attorney and international consultant to world leaders and international organisations. She is the international president of the Global Forum for Women Entrepreneurs (www.gfwe.co.za). Email pearl.kupe@gmail.com or visit www.pearlkupe.co.za