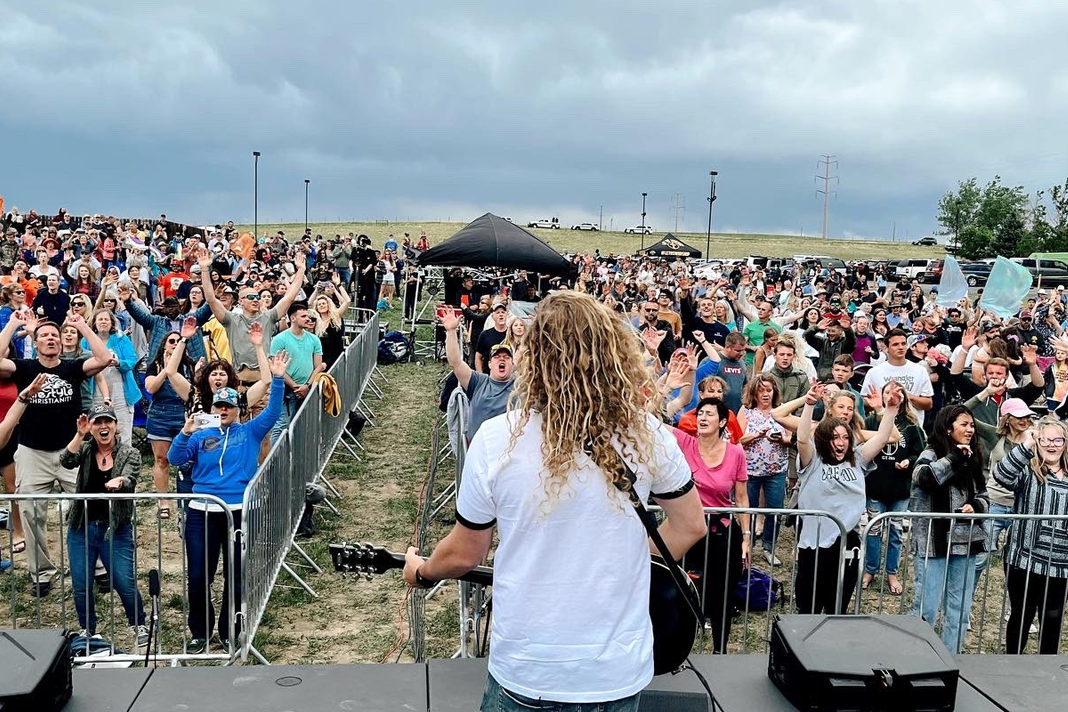 In one of America’s most liberal cities with tons of protesters rising in opposition, thousands of people withstood wind and rain to lift their voices to heaven over Boulder, Colorado with #LetUsWorship founder Sean Feucht and guest Kim Walker-Smith on the eve of Pentecost Sunday.

Boulder is one of 12 cities #LetUsWorship will visit in 2022, culminating with an Oct. 22 stop on Washington, D.C.’s National Mall. #LetUsWorship Boulder, hosted by Vinelife Church, was the fifth stop in Colorado on its 170-city and growing tour.

Having traveled to 70 nations, Feucht said many cities, including Boulder, are “high places,” referring to the Old Testament term for key places of worship, often to false gods.

“I feel like the Lord spoke to me about Boulder, that there is an anointing for worship here,” Feucht told the crowd of young and old. “The battle over Boulder and Colorado is who will be worshipped.

“God is calling us to reclaim high places for worship,” he said.

In addition to wind and rain, an aggressive snake measuring six feet in length threatened the worship team during rehearsal.

Holding the dead snake by its tail, Feucht said it represented prophetically the enemy’s resistance to people being saved, healed, delivered and freed during two hours of #LetUsWorship and ministry from area pastors.

In a Facebook post about the event, Feucht shared his enthusiasm for God’s powerful work amid opposition:

With Kim Walker-Smith as guest worship leader, Feucht said: “We’re going to lift up the name of Jesus, even with these guys behind us,” referring to protesters.

“I love when people come and subject themselves to our worship. One hundred percent of the time God gets a few of them,” said Feucht, later praying for the protesters, LGBTQ activists who retreated during a worship song about joy.

People joined Feucht in praying for Jesus’ love to be poured into Boulder, for open prison doors and freedom for captives of spiritual bondage.

“We’re praying for prodigal sons and daughters all across this city, for those who are bound with addictions and perversions. Set the addicts and confused free,” Feucht said.

Walker-Smith, a mother and worship leader, was encouraged by the young people who came to worship. She believes the greatest threat to the kingdom of darkness is praying mothers who desire that their children hear the voice of God amid the noise.

“I was wondering if we could take a moment now to pray for revival in our children, even those in homes that don’t know Jesus. That they would have dreams, visions, and encounters, leading even their parents to Jesus,” she said.

“I just feel like some of you guys need to shut off the news, Twitter and social media,” he continued. “You need to turn up worship. You need to blast it in your car, in your house, in your neighborhood. This is what Pentecost is all about.”

On the birthday of the church, believers didn’t gather for preaching, he said. “The book of Acts says when they were worshipping, they heard this sound. Worship is the evangelism.”

Of the 170 cities Feucht has visited, people who came to antagonize—like antifa and Black Lives Matter—ended up giving their lives to the Lord.

” You know why? Because we’re so happy and we don’t stop. If you can’t stop them, then you might as well join them, right?” said Feucht, noting #LetUsWorship Boulder was livestreamed to the nations.

He pointed out that in Chicago dozens of people are killed on the streets where churches refuse to meet outdoors for fear of violence, forcing pastors to close their doors.

“In two weeks we’re going to be in Chicago doing a Jesus March,” he said. “The last time we were in Chicago we had 5,000 people on ‘heroin highway.’ Drug addicts were giving their lives to Jesus, throwing their drugs on the stage. People were getting free,” Feucht said.

In Boulder with falling rain as a sign of God’s favor, healing and washing, Feucht told the crowd surrender was the proper response.

“I believe that, if you tune into His voice, you will hear and feel the Father pulling you closer,” Feucht said, pointing to protesters. “He has come tonight to bring a breakthrough out there and right here to free us of our addiction, compromise, half-heartedness and unbelief.”

Feucht urged people in a season of darkness, hopelessness, confusion because of COVID, isolation, depression and loss to turn to God.

Those who never have surrendered to the Lord must not wait, Feucht said, before leading thousands in prayer to receive or rededicate themselves to Jesus. A wooden cross and baptism tank drew people seeking to confirm their commitments to return and surrender.

Known for high suicide rates, Colorado is on God’s radar for freedom and deliverance from spirits of death due to depression, confusion, loneliness and heartache.

“I’m tired of seeing kids and parents end their lives because of depression. Tonight we draw a line in the sand and we say, ‘No more death over Colorado,'” Feucht declared.

“If you’re here and you’ve battled suicide and depression—I believe there are 10 people here who’ve tried to take their lives—then I want you to lift your hand. It’s a miracle you’re here,” Feucht said, encouraging people to gather around those who raised their hands.

He called the day “a prophetic picture, something you should never forget about principalities and powers.”

“Isn’t it wild that it was joy that broke through? They were like, ‘Oh, no, not the joy stuff again,'” Feucht said as he began a prayer for “confused and bound people.”

“We pray that even tonight your love is stronger than their pain and bondage,” he said. “I know that those people who were behind the fence are going to turn into evangelists for Jesus. I’ve seen it with my eyes,” said Fuecht, whose new book, Bold, describes the origin of #LetUsWorship as a protest against government overreach.