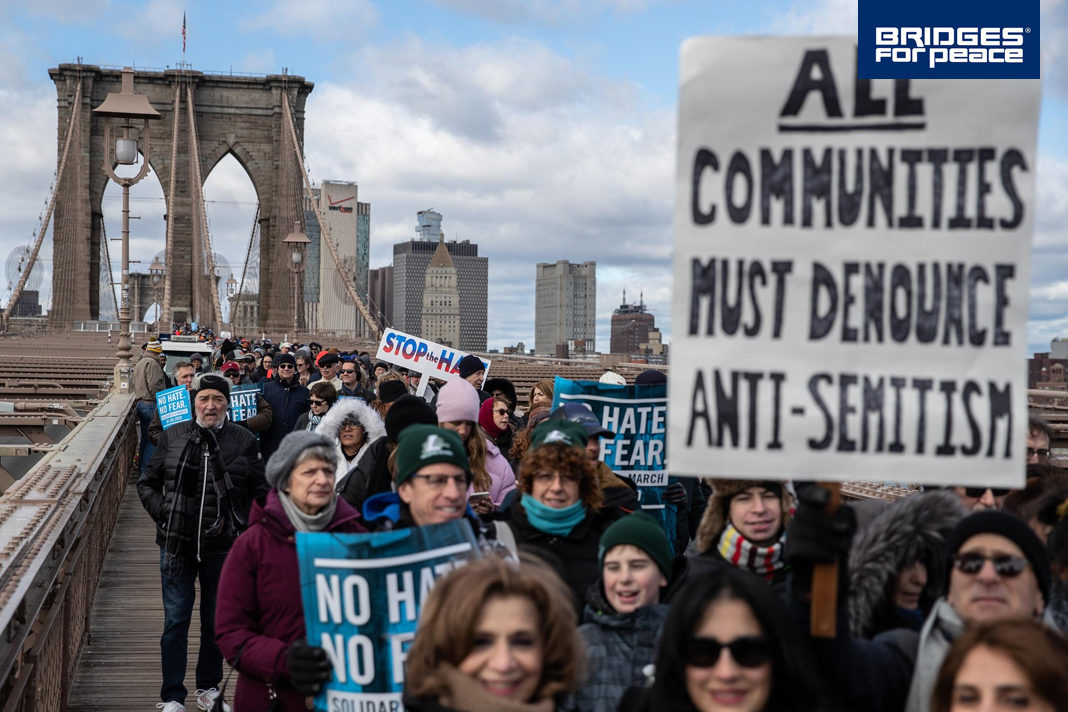 Thousands of people from all backgrounds and religions gathered in New York City Recently to march across the Brooklyn Bridge demonstrating solidarity with their Jewish neighbors who experienced a dramatic spike of anti-Semitic attacks in December.

An estimated 25,000 from multiple states gathered in support of Jewish people in the region after a horrible spate of December attacks, including a mass shooting outside a kosher supermarket in New Jersey that killed four people, and most recently the violent stabbing of five people during a Hanukkah (Festival of Light) celebration in Monsey, New York. Several Jewish people in Brooklyn’s Orthodox neighborhoods also experienced verbal and physical assaults.

Top US politicians, including New York Governor Andrew Cuomo, led the march behind the event’s official banner bearing the words “No hate. No fear.”

Cuomo promised to ramp up governmental action against anti-Semitic hate crimes by designating them as domestic terrorism (allowing for harsher punishment under the law), allocating more money for security at religious sites including schools and cultural centers, and increasing police presence in volatile communities.

The city’s public advocate said he thinks the problem goes deeper than not having enough police officers on the street and instead proposed increasing education against hate and stepping up treatment for mental health, the Jerusalem Post reported.

“I think cops should be used for acute situations and we have to work with our police officers, but anytime we directly go there and we have to have more cops for everything, that means the rest of us are failing,” Jumaane Williams said at the event, as quoted by the Jerusalem Post. “I don’t know if it’s a problem that cops can solve. We as a community have to get together and make sure people are not just tolerating folks but understanding and accepting the beauty of everyone’s culture, the beauty of everyone’s religion, and that takes time.”

Six thousand miles away, Israelis in downtown Jerusalem held their own rally in solidarity outside the Jewish Agency for Israel headquarters.

“We stand with the many thousands of our brothers, sisters and friends in NYC marching against the rising Antisemitism,” Prime Minister Benjamin Netanyahu tweeted in support of New York’s demonstration. “We will not waver in our battle against Antisemitism and hate.”

Over a two-day period during Hanukkah (Festival of Lights), six anti-Semitic incidents were reported in New York City and New Jersey, five of those incidents assaults, according to the Anti-Defamation League (ADL) New York/New Jersey. The ADL regional director called it “appalling, shocking and unacceptable.”

Jewish people living in highly vulnerable communities around New York and New Jersey—especially Hasidic Jews, who are easily identifiable by their style of dress—say the recent anti-Semitic attacks are causing anxiety within their communities.

Her husband, Yehuda, said he doesn’t think everyone should have guns or weapons, but he is considering carrying Mace spray for self-defense. Their 12-year-old son, Lazar, described the anxiety of swapping harassment stories with other Jewish children his age, seeing security posts outside his religious school and participating in shooter drills at school.

“Coming home I see a white car, it goes fast and I turn around and see it’s opening its door. I started running,” he said.

No one should have to live like that, the ADL New York/New Jersey regional director asserted in a statement.

“It is not enough to simply condemn these incidents; we must come together as a city to address the root causes of hatred and bigotry within our communities,” he added.