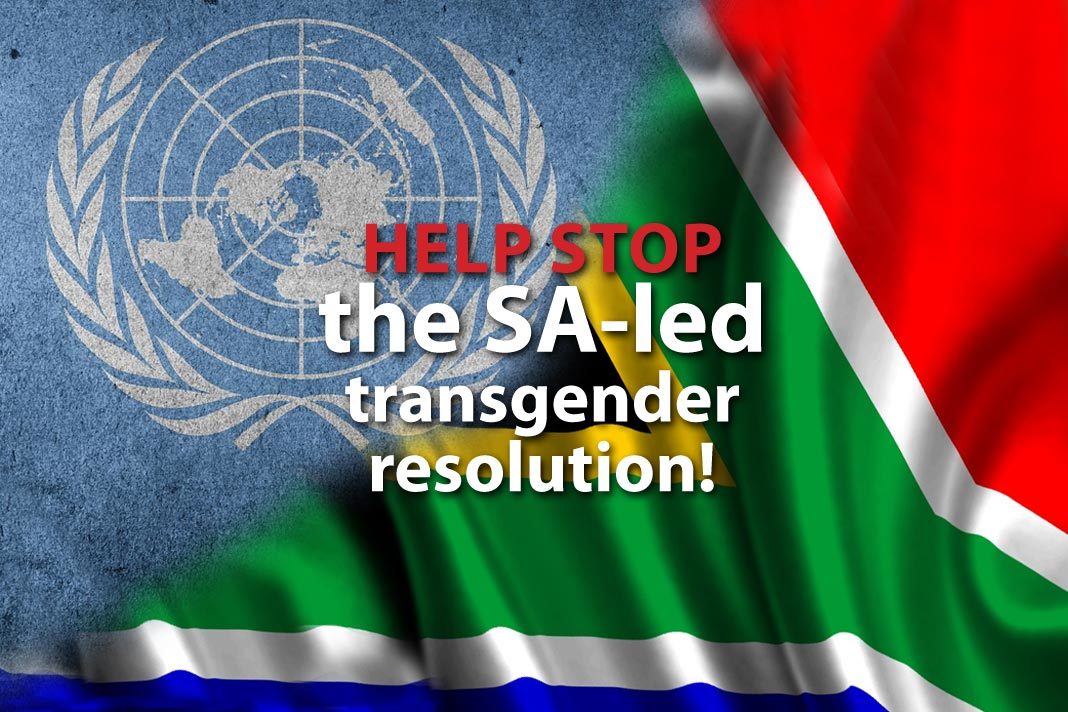 The following urgent ALERT is from the ‘UN Family Rights Caucus’, of which Family Policy Institute is a member. Please act urgently to stop this!

One of the most dangerous assaults on the family we have ever seen at the United Nations (UN) is currently underway – led by the South African government.

A transgender resolution intended to destroy any distinctions between men and women was just released by South Africa at the UN Human Rights Council (HRC).

Negotiations on this resolution are underway right now in Geneva. It could be tabled as early as Thursday (14 March) and voted on and adopted on Friday (15 March 2019).

EMAIL THE UN MISSION OFFICES OF SOUTH AFRICA RIGHT NOW and urge them to withdraw their transgender resolution immediately. Here are their contact details:

Please also email the Minister of International Relations & Co-operation, Lindiwe Sisulu and simply urge her to withdraw SA’s transgender resolution at the UN immediately at chowglaym@dirco.gov.za or nkosinv@dirco.gov.za

The proposed resolution doesn’t even bother to use euphemisms such as “women in all their diversity” or “transgender” women to refer to men and boys who want to compete as women.

It deceptively refers to gender-confused males as “women and girls with a specific set of differences of sexual development, androgen sensitivity and natural testosterone levels.”

In other words, the very terms “women” and “girls” are now to be understood as referring to males with penises and testes (“differences of sexual development”) regardless of the fact that these biological males have higher “natural testosterone levels” (created by their testes) giving them an unfair physical advantage over females in sports.

The deception around this resolution is beyond diabolical because if adopted (and they may have enough votes to get it passed) the following will occur.

Please email or fax the UN mission offices of South Africa RIGHT NOW and urge them to withdraw their transgender resolution immediately. Send this news item to as many people as you can. We need thousands of emails flooding in from all around the world.