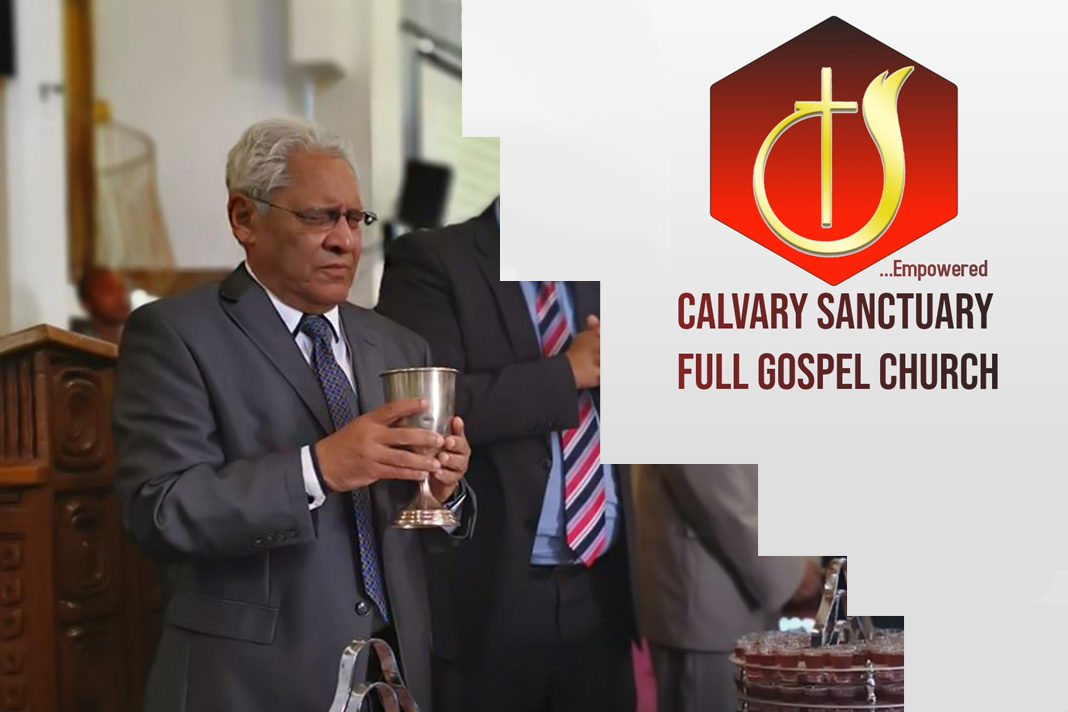 Dr. Theo Bowers, Snr. Pastor of Calvary Sanctuary FGC, is celebrating 50 years of full time ministry as a Pastor. As a congregation, we felt we could not let this occasion pass by without arranging a special series of Thanksgiving gatherings.

On Friday, 4th October, we invited the entire Peninsula Region FGC, including fellow ministers of the ecumenical networks that Dr. Bowers worked alongside, to a symposium which was facilitated by Dr. Nadine Bowers, daughter of Dr. Theo.

It was a relaxed setting where certain contemporaries were interviewed in relation to their sentiments of Dr. Bowers influence in their lives.

The first panel included some of the church council members of Blessed Hope Chapel FGC (Steenberg) who today are all ordained ministers (Emeritus) in the persons of Pastor Abraham Joseph, Pastor Daniel Johnson and Pastor Basil Zietsman. Dr. Bowers served this congregation as Pastor for 18 years (1969 – 1987) and amongst many other wonderful exploits, was also very instrumental in the completion of the church building. It is worth noting that during his tenure at the Steenberg congregation, four other churches ie Shekinah FGC, Tabernacle Of Life FGC, Faith Tabernacle FGC (Kensington), Maccassar FGC,  were also pioneered as a result of his endeavors to expand God’s kingdom through church planting. All four assemblies are still today, fully functional congregations, with their own church buildings.

The Second Panel included mentees who were all lectured by Dr. Theo Bowers at the Chaldo Bible Institute. Two members of this panel are also ordained ministers in the persons of Pastor Mark Harris (Blessed Hope Chapel  FGC) and Pastor Jimmy Francis (Bethel Tabernacle FGC).

A delicious meal was served afterwards to the 256 ministers in attendance. This also afforded them the opportunity to congratulate Dr. Bowers and also to fellowship and interact.

Calvary Sanctuary FGC, as the local assembly, dedicated the morning service to express appreciation and gratitude to Dr. Theo and Rev Esme Bowers for their tireless and sacrificial labor of love towards the congregation. They are serving the Calvary Sanctuary FGC faithfully for the past 32 years.

Each department also partook in the service with tributes, creative arts pieces and presentation of gifts.

This service was held to reflect on Dr. Bowers’ 50 years of ministry in it’s entirety. The service was led by Trevor Sampson, well known Gospel artist who also came to faith in Christ as a result of Dr. Bowers’ ministry. We were also favored with two beautiful song items by the Shekinah Full Gospel Church Choir. A mini documentary of the early years of Dr. Bowers was presented and can also be watched on The Full Gospel Church of God In SA Facebook page.  Several keynote speakers were invited to share about Dr. Bowers’ various spheres of influence.

The Full Gospel Church Of God In SA’s Moderator, Dr. Stafford Petersen (see Photo 8) spoke about Dr. Bowers’ roles and positions served within the structures of The Full Gospel Church, Pastor Charles White, Snr. Pastor of Eternal Flame spoke about his ecumenical involvement beyond the local assembly and denomination, and Rev. Esme Bowers interviewed Dr. Goni Babu (former moderator) and Pastor Delores Smallberg (emeritus)  regarding their experiences with Dr. Bowers as peers and as fellows students while in preparation for the ministry. Dr. Bowers preached a sermon entitled: Being An Influencer For The King and expounded on the scripture, Matthew 13v3-9. This sermon very much encapsulates his ministry journey as the title so succinctly depicts.

After the service each guest was served with refreshments and all the pastors in attendance were hosted for some snacks, as well as some refreshments.

We are eternally grateful for the invaluable role Dr. Bowers and Rev. Esme Bowers has fulfilled in the various spheres where God has led them to advance His Kingdom.

A SUMMARY OF HIS NATIONAL LEADERSHIP PROFILE AS ADMINISTRATOR

Further National church service at leadership level included his appointment as the First National Secretary / Director of evangelism from 1976 to 1981.

National Secretary of the church 1979 to 1981, National Assistant General Superintendent 1981 to 1983, National General Superintendent of Conference 1984 to 1986, Moderator of the Full Gospel Church Wynberg Division 1987 to 1989, Deputy General Overseer United Assemblies 1984 to 1996. Member of the National Executive Councils  for almost 40 years. First Deputy Moderator of the F.G. Church from 1997 for a number of years.