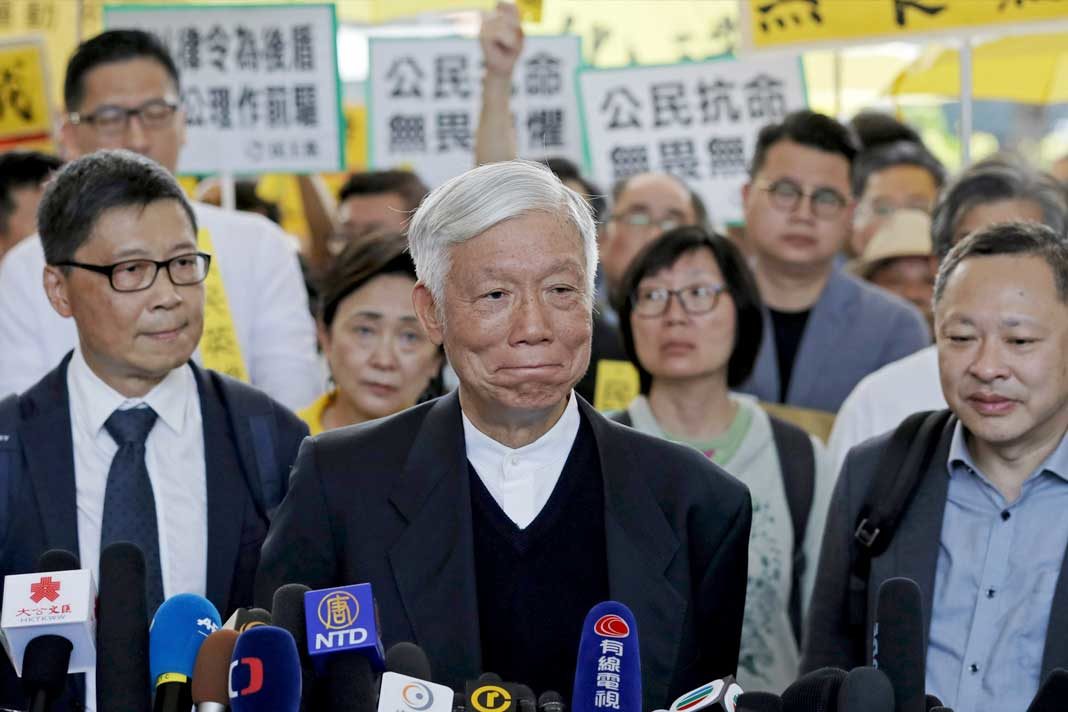 A Baptist pastor in Hong Kong turned the stands of a Hong Kong courtroom into his pulpit, quoting Scripture and calling for justice in the name of God, after he and eight other activists were convicted Tuesday for crimes related to their involvement with pro-democracy Occupy Central and Umbrella Movement protests.

Chu Yiu-ming, leader of Chai Wan Baptist Church, recounted his testimony of finding hope in Christ after a bleak childhood and defended his calling as a minister to fight for human rights, dignity, and care for all people.

“We have no regrets. We hold no grudges, no anger, no grievances. We do not give up,” he said, speaking on behalf of fellow activists involved in a campaign to bring universal voting rights to Hong Kong. “In the words of Jesus, ‘Happy are those who are persecuted because they do what God requires; The Kingdom of heaven belongs to them!’ (Matthew 5:10)”

An English translation of Chu’s remarks to the court was printed in full in the Hong Kong Free Press.

In 2013, Chu, along with scholars Benny Tai and Chan Kin-man, launched Occupy Central with Love and Peace, a movement that led to the widespread Umbrella Movement protests the following year. Though the trio was committed to nonviolent civil disobedience, the Hong Kong judge found them guilty of “conspiracy to commit public nuisance.”

As a special administrative region of China, Hong Kong has been afforded more freedom and autonomy than in the mainland. But it does not elect government leaders directly, and Christian leaders and activists are increasingly worried about encroaching Communist control.

The 75-year-old pastor told the courtroom in Cantonese:
We strive for democracy, because democracy strives for freedom, equality, and universal love. Political freedom is more than loyalty to the state. It professes human dignity. Every single person living in a community possesses unique potentials and powers, capable of making a contribution to society. Human right is a God-given gift, never to be arbitrarily taken away by any political regime.

Meanwhile, 200 Christians had gathered for a worship service at Kowloon Union Church, where the Chu and the others first announced the Occupy Central campaign, to pray for a favorable verdict for the leaders, Evangelical Focus wrote. Outside the courthouse, supporters held umbrellas as a sign of the protests.

Protestant Christians make up about 6 percent of the population in Hong Kong. Wary of Communist oversight, they have played a major role in the push for democracy over the past several years, spurred by their biblical convictions regarding social justice and their willingness to suffer for the cause, one leader told NPR amid the Umbrella Movement protests, which shut down streets in the city back in 2014.

“The seeds of peaceful non-violent civil disobedience action have been planted deep in the heart of Hong Kong people,” Chu said in his testimony, which led some supporters to tears. “This movement is an awakening of the civil spirit. … Wellbeing, decency, and peace constitute our common dream. It is also the will of God. Let us strive to make it real for our city.”

Chu has served as a pastor in Hong Kong since 1974 and told the court about worrying that his ministry over the years—advocating on behalf of the poor and suffering—could get the church in trouble with the government. He said he found strength in Scripture, which he quoted more than a half-dozen times during his remarks before the court.

“The valley of the shadow of death leads to spiritual heights,” he said. “For decades, I have preached numerous sermons. Little could I anticipate that the one message which preparation took me the longest time and the most heartfelt prayer, and which probably would reach the largest audience, is precisely this one delivered from the defendant’s dock.”

Amnesty International called the guilty ruling “a crushing blow for freedom of expression and peaceful protest in Hong Kong.”

Chu faces up to seven years in prison and awaits a sentencing hearing later this month; others with additional convictions could get even lengthier sentences. According to news reports, the fellow Occupy Central cofounders asked that he be spared a prison sentence.

World interviewed the aging pastor last month. “Under the cross, those who participate in the movement need to pay the price,” he told the magazine. “And now we are paying the price.”