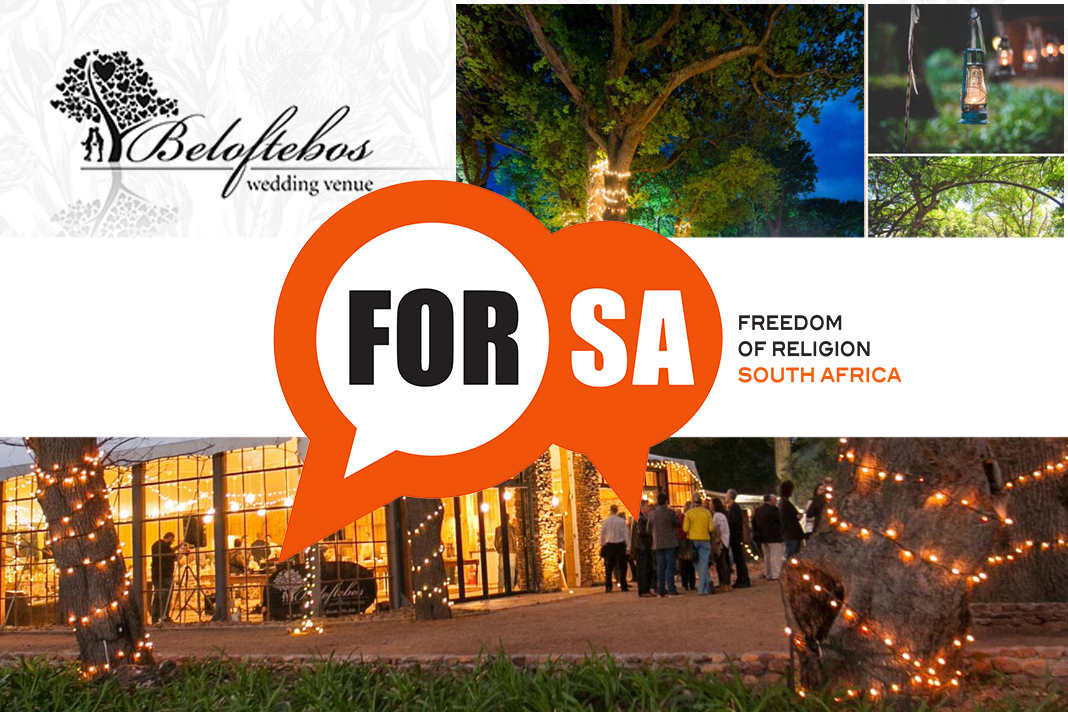 Last month, the South African Human Rights Commission (SAHRC) made good on previous threats to “deal with discriminatory venues” when it (in its own name) instituted legal proceedings against Beloftebos in the Cape Town High Court sitting as an Equality Court.

In its application, the SAHRC accuses Beloftebos (a wedding venue near Stanford, Western Cape) and its owners of unfairly discriminating on grounds of sexual orientation, after they refused – on grounds of their Biblical conviction that marriage is between a man and a woman – to host and participate in the celebration of same-sex marriages at the venue. Essentially, the SAHRC is asking the Court for three things:

At a media briefing, SAHRC Commissioner André Gaum stated that “this is obviously a case that will not only be applicable to wedding venues … It will be applicable to all businesses.” And he is 100% right. Whatever the Court decides, will indeed apply to all businesses – including, for example, businesses owned by persons from the LGBT community who would likely be forced (if the Court decides against Beloftebos) to do things, or accommodate events, that go against their conscience, belief and opinion. Say, for example, a customer were to approach a LGBT-owned printing business with an order to print flyers that say “Homosexuality is an Abomination (Leviticus 18:22)”, the business would likewise be forced to do work that offends the LGBT owners’ deeply held opinions and beliefs.

As the saying goes, “what is good for the goose, is good for the gander”. Thus, the SAHRC and LGBT activists driving the matter, would be well-advised to think very carefully about this “test case” which could potentially force not only Christians, but also the LGBT community in whose interest the SAHRC purportedly acts, to do things that violate their innermost beliefs. Furthermore, if the State (through the SAHRC, or the Court) can force the owners of Beloftebos to do things that violate their conscience and moral conviction, what stops it from forcing anyone of us to do so?

As such, you can be for same-sex marriage and stand with Beloftebos in this matter. Ultimately, Beloftebos’s case is about freedom – the freedom of every South African to be true to their conscience and deeply held convictions. No one should be forced to do things that violate their sincerely held beliefs and as a result, also their own human dignity.

On the SAHRC’s own version, Lu and Thorne themselves never complained to the SAHRC after Beloftebos declined their wedding request. Complaints were however lodged by LGBT activists including Pierre de Vos (a professor in law, who is cited as a Respondent in the court case), and also by Faiez Jacobs (seemingly in his capacity as secretary of the Western Cape branch of the ANC, despite the fact that no resolution has been attached to confirm that he is indeed acting for and on behalf of the ANC in this instance). In addition, the SAHRC has cited the Commission for Gender Equality (CGE) (who was first to investigate the particular incident – albeit of their own accord – back in 2017, but whose current interest in the matter is not clear at all) as a Respondent in the court case.

Although the SAHRC’s entire case rests on the Lu and Thorne incident, in its court papers, the SAHRC also refers to the more recent incident (in January 2020) of Megan Watling and Sasha-Lee Heekes “in order to provide this court with a more complete factual context”. On the SAHRC’s own version however, Watling and Heekes have withdrawn their initial complaint to the SAHRC, and “decided to appoint private attorneys to pursue their dispute with Beloftebos”.

To date, however, Watling and Heekes have not instituted proceedings against Beloftebos in any court, neither have they written to Beloftebos to say that they intend to do so. This is, despite the fact that earlier in the year, Watling and Heekes created a webpage where they specifically state that they have decided to pursue legal action against Beloftebos. They also used this webpage to set up a fund calling for donations to support what they claim “will be a long and drawn out battle with significant costs”, which is likely to end up in the Constitutional Court.

As a point of interest, it has since come to light that the reason why the SAHRC’s entire case rests on the 2017 incident (i.e. Lu and Thorne), is because of a fall-out between the SAHRC and the couple involved in the 2020 incident (i.e Watling and Heekes). According to recent news articles, Watling and Heekes were not happy with the SAHRC’s handling of the matter and decided to do their own thing instead. In particular, Watling and Heekes accused the SAHRC of “cheap politics”, “power play”, and “turning to legal action to … save face” (with regards to the Commission’s delay in pursuing the matter against Beloftebos).

In the meanwhile, the Commission for Gender Equality (CGE) has written to Beloftebos, advising that it is now also investigating the second incident (i.e. that of Watling and Heekes) and asking Beloftebos’s response to a whole range of questions.

Beloftebos has already indicated that it will oppose the SAHRC’s legal proceedings in the High Court, and is expected to deliver its response to the SAHRC’s application after lockdown is over.