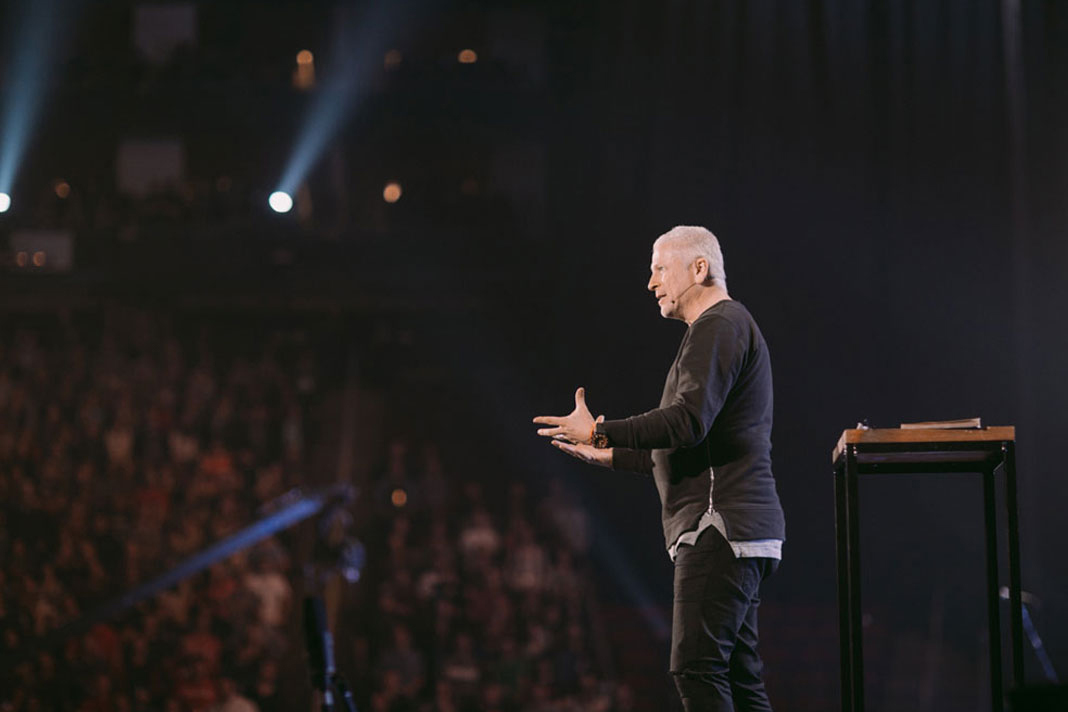 Pastor Louie Giglio apologized on Tuesday after receiving significant backlash to comments made on Sunday in which he suggested the phrase “white privilege” should be replaced with “white blessing.” Giglio’s comments came during a recorded sit-down conversation at Passion City Church in Atlanta with Lecrae and Chick-fil-A CEO Dan Cathy.

In a clip posted by Faithfully Magazine editor Nicola A. Menzie, Giglio said that because white people recoil at the concept of “white privilege,” it would be “a great thing” to change the name to “white blessing.”

“I want to flip that upside down because I feel like the other side of it’s true with our nation’s history,” Giglio said. “We understand the curse that was slavery—white people do—and we say, ‘That was bad.’ But we miss the blessing of slavery, that it actually built up the framework for the world that white people live in. So a lot of people call this white privilege. When you say those two words, it just is like a fuse goes off for a lot of white people because they don’t want somebody telling them to check their privilege. I know that you and I have both struggled in these days with ‘Hey, if the phrase is the trip-up, let’s get over the phrase and let’s get down to the heart.’ Let’s get down to ‘What then do you want to call it?’ And I think maybe a great thing for me is to call it white blessing. That I’m living in the blessing of the curse that happened generationally that allowed me to grow up in Atlanta.”

Though Giglio’s intent appeared to be highlighting that the prosperity of white people came on the backs of decades of oppression, his wording confused and alarmed many online. Several Christian leaders criticized Giglio’s comments for calling slavery “a blessing” in any sense.

Lisa Sharon Harper, founder and president of Freedom Road, wrote a Twitter thread rebuking the theological inaccuracies of Giglio’s remarks and calling him to public repentance, lest his remarks confuse and lead other Christians into sin. She pointed out that the term Giglio ought to have used was “white patriarchy,” or systems based upon the inaccurate theology that God intended for white men to rule the earth.

“Both blessings and privileges are given,” Harper wrote. “They do not magically appear out of thin air. God gives blessings. In scripture, God blesses those who do what is just and good. Parents give privileges to children who do well. By calling slavery #whiteblessing or #whiteprivilege, you attempt to conscript God as a co-conspirator in the [aberration] of human hierarchy. You attempt to make #whiteness God’s responsibility; aligning God with the very setup that wages war against God’s image on earth.”

In response to criticism, Giglio posted a video apology Tuesday afternoon, in which he said he was wrong, clarified his intent and emphasized his need to continue learning.

“I just wanted to come directly to you today and sincerely apologize for the use of a phrase Sunday: ‘white blessing,'” Giglio said. “And I extend that apology today to every single person who is listening to me right now but most importantly I extend that apology to my black brothers and sisters. I, like so many, am so burdened about what is happening in our nation right now and I’m heartbroken about where we are as a nation, and one of the things I’m most heartbroken about is trying to help myself continue to learn and to help my white brothers and sisters understand that white privilege is real. And in trying to get that sentiment across on Sunday, I used the phrase ‘white blessing,’ for which I’m deeply sorry. It was a horrible choice of words. It does not reflect my heart at all.

“To be clear, I don’t believe there is any blessing in slavery. To the contrary, I’m trying to understand and help people see that I and my white brothers and sisters, we sit in large part where we are today because of centuries of gross injustice done to our black brothers and sisters. This is my heart. This is what I want to more fully understand, because I believe this will help us stay engaged in this conversation so we can all move forward together. So thank you for just letting me open my heart to you today. Thank you for letting me apologize directly to you today. And I ask that you would pray for me and possibly even join me as I just desire to learn, to understand, to stay engaged and to be a part of all of us moving forward together to the place that God wants us to be.”

Lecrae also posted a video to Twitter in which he said that he was “not OK” with Giglio’s original comments about “white blessing.” He said the reason he remained quiet in the video was because he was processing the statement and how to respond.

“I wasn’t OK with it. I was very uncomfortable, and I was processing, ‘Man, what do I say in light of this?'” Lecrae said. “There have been a lot of times, as I’ve navigated white supremacy or racial injustice and I’ve wanted to lash out, honestly, in anger. And there [are] other moments where I’ve been like, ‘God, give me the grace and wisdom on how to deal with this.'”

Lecrae says he ultimately decided to talk to Giglio privately on Sunday, immediately after the filmed conversation ended, to discuss where he had gone wrong. He says he also spoke to Giglio again on Monday night. Lecrae also thanked those who had asked questions online for bringing this important conversation to light.

In recent weeks, Giglio has been vocal in his support for racial justice, including encouraging Passion church members to attend peaceful protests taking place in Atlanta.

“There’s no way I believe a Jesus-follower can watch what happened to George Floyd and not be outraged and not be so brokenhearted,” Giglio said on Pentecost Sunday. “And so we pray for his family today. We pray for our nation today.”