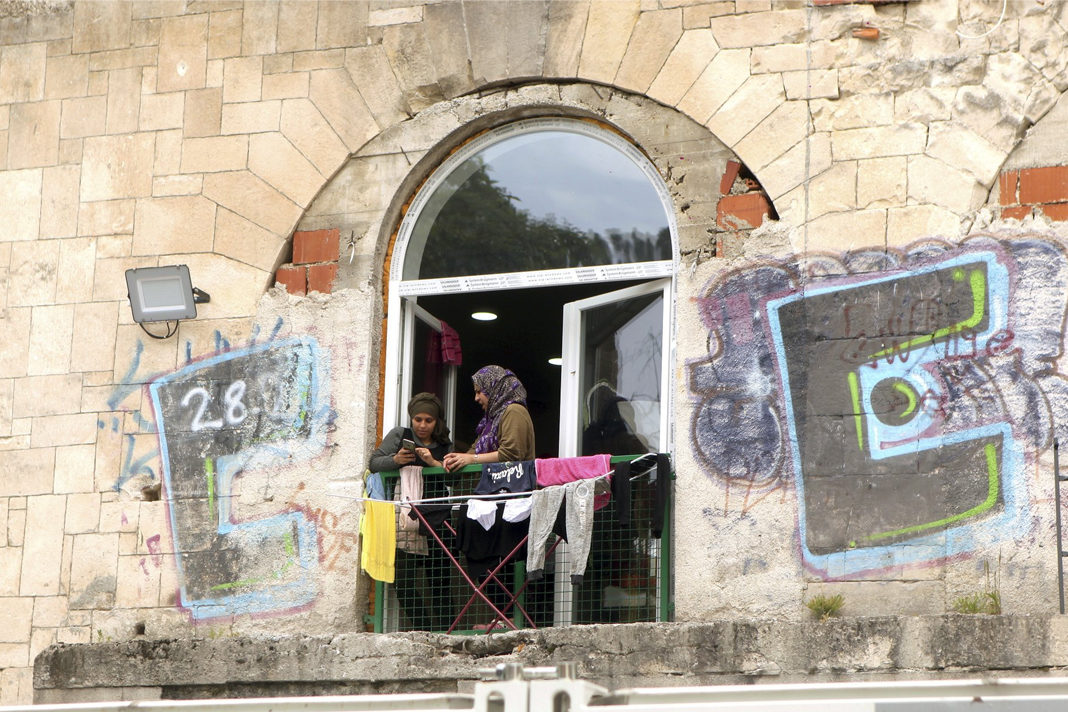 Aid groups are warning of a developing humanitarian crisis in Bosnia as more migrants make their way to one of Europe’s poorest and most volatile countries, where the needs of the existing population already strain a thin social safety net.

The Bosnian Red Cross has sounded the alarm over a rising number of desperate migrants in the northwestern cities of Bihac, Velika Kladusa and Cazin. “We are currently struggling to provide migrants with food and sanitary products,” said Selam Midzic, head of the Red Cross organization in Bihac.

Thousands of migrants are sleeping rough on the streets and the parks after trying to cross the border into Croatia but are being pushed back into Bosnia, aid groups say. Tensions are mounting, among the migrants themselves who are engaging in fights with each other, and with local residents in Bosnia.

“They (migrants) run around freely. We cannot sleep peacefully anymore, we are constantly on alert,” said Husein Karajic, a resident of Velika Kladusa.

Local authorities recently considered imposing a curfew, but put the idea on hold.

The so-called Balkan route that migrants from the Middle East, Central Asia and North Africa take in hopes of reaching western Europe shifted south to Bosnia two years ago after governments closed off other established paths north of the country.

Most migrants arrive in Bosnia from Greece after moving relatively unimpeded across the territory of Macedonia, Montenegro and Serbia. According to the official Bosnian statistic, majority of them hail, in descending order, from Pakistan, Bangladesh, Iraq, Syria and Afghanistan.

Bosnia, which never fully recovered from its 1992-95 internecine war, has struggled to house, feed and provide psychological care for about 34,000 newcomers who crossed into the country since the beginning of last year, according to Bosnian government statistics.

At the same time, the migration pressure continues to grow. In the first five months of this year, the county registered over 9,000 new migrant arrivals, nearly 12 times more than for all of 2017. 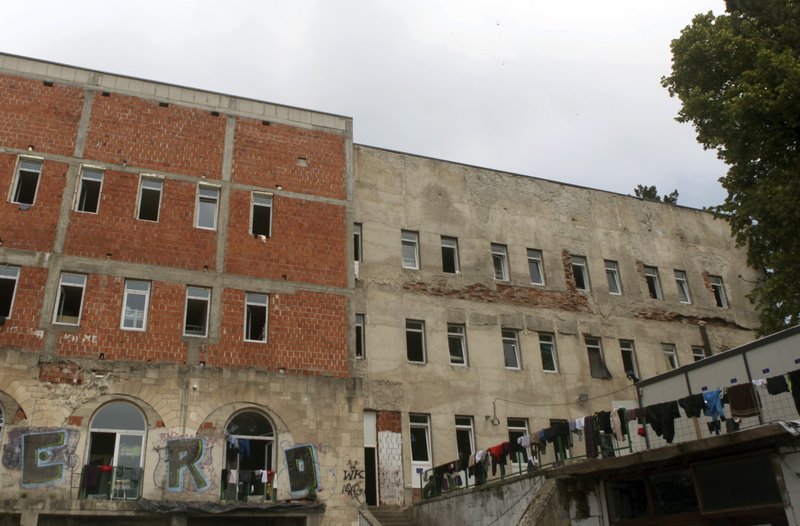 This photo shows a general view of an abandoned building, now serving as a shelter in the northwestern Bosnian town of Bihac. Aid groups in Bosnia are finding it increasingly difficult to respond to the growing migration pressures, warning that the situation in one of Europe’s poorest and most volatile countries is speedily transforming into a fully-fledged humanitarian crisis. (AP Photo/Almir Alic)

Meanwhile, Bosnian Serb hard-line leader Milorad Dodik, who currently heads Bosnia’s multi-ethnic joint presidency, has blocked efforts to deploy the army to stem the influx of migrants who mostly enter the country across the Drina river, on its eastern border with Serbia.

Dodik, who has repeatedly pressed for Serbs to separate from multi-ethnic Bosnia and unite with Serbia proper, has been using the crisis to promote his Serbian-first attitude, including by refusing to accommodate any migrants in the country’s highly autonomous Serb-run half.

“As a Serb member of (Bosnia’s) presidency, I cannot accept deploying the army along our borders with Serbia and Montenegro,” he said on Tuesday.

Dodik added that he would also block the deployment of the EU’s border protection agency teams along Bosnia’s border with Croatia.

“It would only solidify the border and result in more migrants remaining in Bosnia,” he said.

The EU has so far provided Bosnia with over 2 million euros in emergency funding to serve migrants. But the Balkan country can only accommodate about 3,500 migrants in transit centers, aid groups say, most of whom are concentrated in Krajina, which is near the Croatian border.

“Right now, we have over 10,000 migrants (in Krajina) and the majority of them have nowhere to sleep; we have no beds for them,” said Husein Klicic, the head of Bosnian Red Cross organization.

Growing frustration among the unhoused migrants has contributed to public disturbances, including violent fisticuffs between physically and mentally exhausted men in the streets of Bihac and Velika Kladusa.

In the past, the majority of migrants who entered Bosnia were there temporarily, eventually managing to cross the border into Croatia, according to Bosnian government statistics. But the neighboring European Union member country, which shares a 1,000-kilometer (620-mile) frontier with Bosnia, took additional steps to prevent cross-border movement. 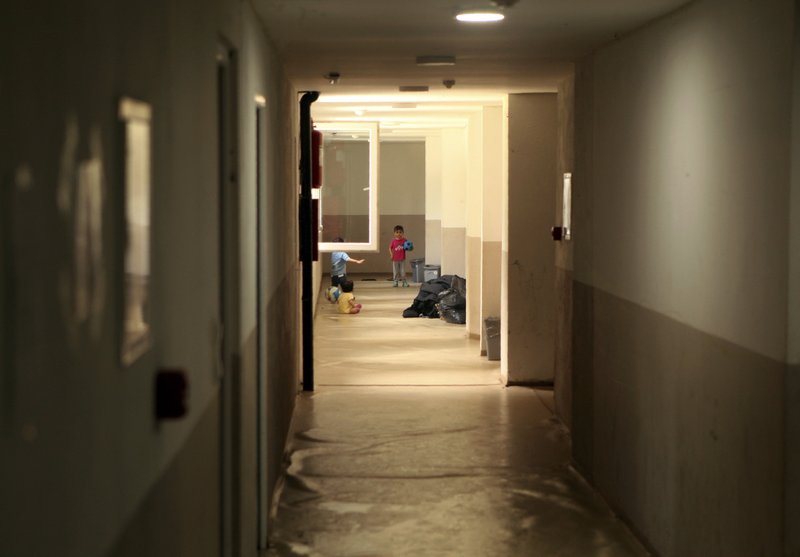 Children play in the hallway of the abandoned building, now serving as a shelter in the northwestern Bosnian town of Bihac. (AP Photo/Almir Alic)

Crews working for the Croatian government erected a spiked fence at a border crossing where police clashed last year with a large group of migrants trying to enter from northwestern Bosnia.

Croatian Interior Minister Davor Bozinovic said the fence at the Maljevac border crossing was just the first of many that will be put up.

Bozinovic said the EU made a recommendation to “fence off border crossings” and that Croatian police will continue to strengthen its capacities for an “efficient fight against illegal migrations.”

Several prominent human rights organizations have accused Croatian police of beating migrants, confiscating their meager belongings and illegally pushing them back into Bosnia outside official crossing points and without notifying Bosnian border guards. There have also been reports of Croatian police entering Bosnia to push migrants further away from the border. Croatian police deny the allegations. 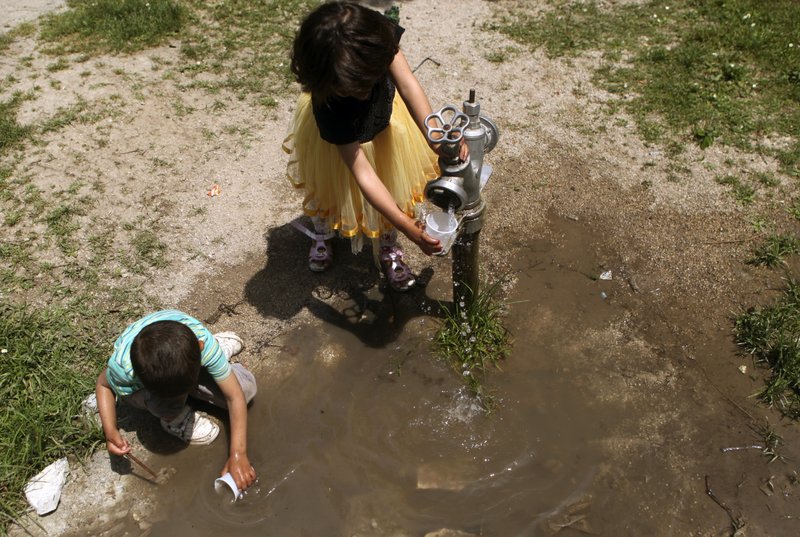 Children play next to puddle in front of the abandoned building, now serving as a shelter in the northwestern Bosnian town of Bihac. (AP Photo/Almir Alic)

In a March report, human rights group Amnesty International accused the EU of “turning a blind eye to vicious assaults by the Croatian police, but also funding their activities.”

The report warned that the “continued pushbacks and collective expulsions (to Bosnia), sometimes accompanies with violence and intimidation …threaten to turn the country that is still reeling from a devastating conflict into a new crisis point.”

Croatian authorities have repeatedly denied such reports in the past.

While the Croatian government and its law-enforcement agencies embrace harsh anti-immigrant rhetoric, the Croatian Red Cross is increasing its efforts to assist its overwhelmed Bosnian colleagues.

It started dispatching mobile crisis teams to Bihac and Velika Kladusa to work alongside Bosnian aid workers who appear to be headed for a complete burnout as they deal with the thousands of migrants sleeping rough, some of whom are traumatized and in need of psychological assistance, and no organized food deliveries or medical assistance.

“We can no longer describe the situation (in Bosnia) as a migration crisis, as it has effectively transformed into an (all-encompassing) humanitarian crisis that creates numerous problems for the local population” and aid workers, said Katarina Zoric, a Croatian Red Cross representative.

Robert Markt, the head of the Croatian Red Cross, agreed.

“Struggling aid workers (in Bosnia) are currently the last line of defense against total chaos,” he said.