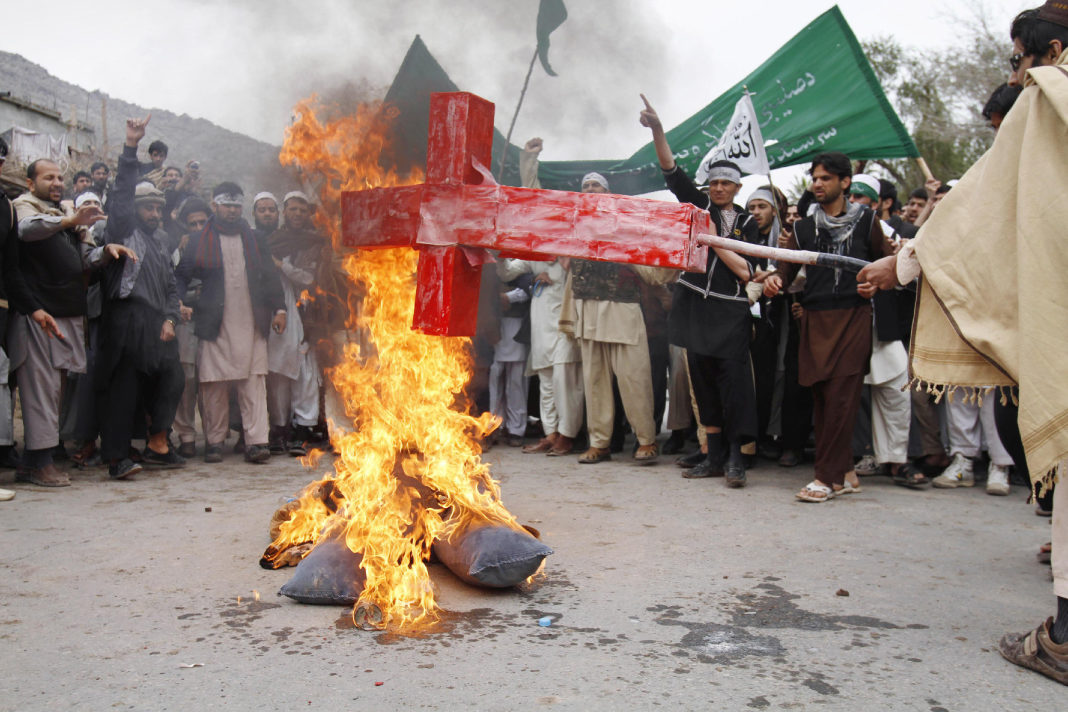 Christian Persecution ‘At Near Genocide Levels,’” the title of a recent BBC report, cites a lengthy interim study ordered by British Foreign Secretary Jeremy Hunt and led by Rev. Philip Mounstephen, the Bishop of Truro. According to the report, one in three people around the world suffers from religious persecution, with Christians being “the most persecuted religious group”. “Religion ‘is at risk of disappearing’ in some parts of the world,” it noted, and “In some regions, the level and nature of persecution is arguably coming close to meeting the international definition of genocide, according to that adopted by the UN.”

Why is the West ‘asleep’?
British Foreign Secretary Jeremy Hunt is also quoted on why Western governments have been “asleep” — his word — concerning this growing epidemic:
“I think there is a misplaced worry that it is somehow colonialist to talk about a religion [Christianity] that was associated with colonial powers rather than the countries that we marched into as colonisers. That has perhaps created an awkwardness in talking about this issue—the role of missionaries was always a controversial one and that has, I think, also led some people to shy away from this topic.”

Christians are not all colonialists
Whatever the merits of such thinking, the fact is that many of the world’s most persecuted Christians have nothing whatsoever to do with colonialism or missionaries. Those most faced with the threat of genocide — including Syria’s and Iraq’s Assyrians or Egypt’s Copts — were Christian several centuries before the ancestors of Europe’s colonisers became Christian and went missionising.

Muslim nations are the highest persecutors
The overwhelming majority of Christian persecution, however, evidently occurs in Muslim majority nations. According to Open Doors’ World Watch List 2019[WWL], which surveys the 50 nations where Christians are most persecuted, “Islamic oppression continues to impact millions of Christians.” In seven of the absolute worst ten nations, “Islamic oppression” is the cause of persecution. “This means, for millions of Christians—particularly those who grew up Muslim or were born into Muslim families—openly following Jesus can have painful consequences,” including death.

Sharia law does not allow for Christianity
Among the worst persecutors are those that rule according to Islamic law, or Sharia law. In Afghanistan (ranked #2), “Christianity is not permitted to exist,” says the WWL 2019, because it “is an Islamic state by constitution, which means government officials, ethnic group leaders, religious officials, and citizens are hostile towards” Christians. Similarly, in Somalia, (#3), “The Christian community is small and under constant threat of attack. Sharia law and Islam are enshrined in the country’s constitution, and the persecution of Christians almost always involves violence.” In Iran (#9), “society is governed by Islamic law, which means the rights and professional possibilities for Christians are heavily restricted.” Equally telling is that 38 of the 50 nations making the WWL 2019 are Muslim majority.

Liberal news station
Perhaps the BBC succumbed to silence concerning the sources of Christian persecution — that is, succumbed to “the atmosphere of political correctness” which it ironically highlighted — because in its own report, it did not rely on the WWL. The problem with this interpretation is that the study the BBC did rely on, the Bishop of Truro’s, is saturated with talk concerning the actual sources of Christian persecution. In this regard, the words “Islam” and “Islamist” appear 61 times; “Muslim” appears 56 times in this review on persecuted Christians.

Here are a few of the more significant quotes from the Bishop of Truro’s report:
• “The persecution of Christians is perhaps at its most virulent in the region of the birthplace of Christianity—the Middle East & North Africa.”

• “In countries such as Algeria, Egypt, Iran, Iraq, Syria, and Saudi Arabia, the situation of Christians and other minorities has reached an alarming stage.”

• “The eradication of Christians and other minorities on pain of ‘the sword’ or other violent means was revealed to be the specific and stated objective of [Islamic] extremist groups in Syria, Iraq, Egypt, north-east Nigeria, and the Philippines.”

• “[T]here is mass violence which regularly expresses itself through the bombing of churches, as has been the case in countries such as Egypt, Pakistan, and Indonesia.”

• “The single-greatest threat to Christians [in Nigeria] … came from Islamist militant group Boko Haram, with US intelligence reports in 2015 suggesting that 200 000 Christians were at risk of being killed… Those worst affected included Christian women and girls ‘abducted, and forced to convert, enter forced marriages, sexual abuse, and torture.’”

• “An intent to erase all evidence of the Christian presence [in Syria, Iraq, Egypt, north-east Nigeria, and the Philippines] was made plain by the removal of Crosses, the destruction of Church buildings and other Church symbols. The killing and abduction of clergy represented a direct attack on the Church’s structure and leadership.”

• “Christianity now faces the possibility of being wiped-out in parts of the Middle East where its roots go back furthest. In Palestine, Christian numbers are below 1.5 percent; in Syria the Christian population has declined from 1.7 million in 2011 to below 450 000 and in Iraq, Christian numbers have slumped from 1.5 million before 2003 to below 120 000 today. Christianity is at risk of disappearing, representing a massive setback for plurality in the region.”

Finally recognising the threat
The BBC should be commended for (finally) reporting on this urgent issue — even if it is three years behind the times. As the Truro report correctly observes, “In 2016 various political bodies including the UK parliament, the European Parliament, and the US House of Representatives, declared that ISIS atrocities against Christians and other religious minority groups such as Yazidis and Shi’a Muslims met the tests of genocide.” At the very least, it appears that the BBC has stopped trying to minimise the spectre of Christian persecution as it did in 2013, when this situation was just starting to reach the boiling point.