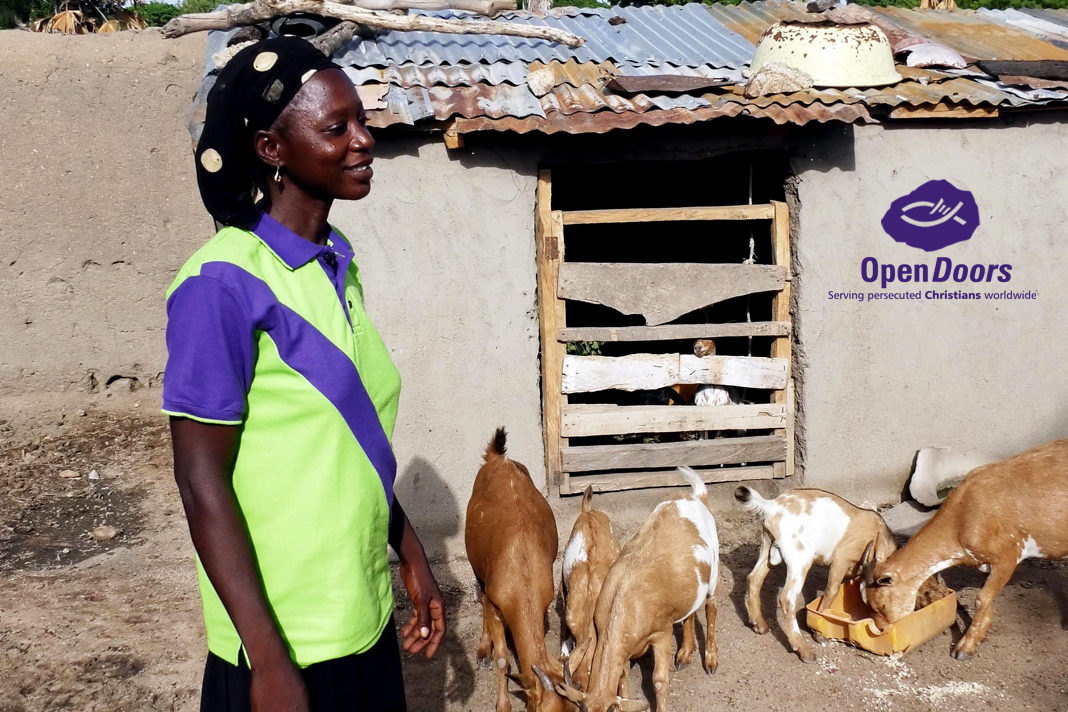 “Before you, I had no hope,” Rikiya says.

We’re sitting under a corrugated roof propped up by columns of bleached tree trunks outside of Rikiya’s home near Guyaku, Nigeria. The afternoon sun is cooking the red dirt at our feet, and all the children have found the shade.

Rikiya standing in the doorway to her home.

A small village dog and her pup lay near our chairs, bedding in for the afternoon. The walls of Rikiya’s home are made from bamboo and tied together with twine. A thatch broom rests neatly in the corner—the sounds of bleating goats echoing from the mud-brick enclosure about 20 yards away.

In Nigeria, Rikiya’s name comes from the biblical prophet Jeremiah and means “exalted by the Lord.” However, at times, that blessing has been difficult to see.

When Rikiya was only two years old, her mother died, leaving her an orphan; she never mentions her father. Her grandmother did the best to raise Rikiya, and when she was of age, she married. During the first nine years of marriage, Rikiya and her husband had three children: Jennifer, Peace and Joshua. But in the ninth year, her husband grew ill and died only two days after his symptoms appeared. Only one month after her husband’s passing, while Rikiya was still in mourning, a neighbor burst into her home.

“Houses are being set on fire in the neighboring village!” he shouted.

Portrait of Rikiya with her village in the background.

“When they came, we were resting in the compound,” Rikiya says. When she heard the news, she jumped up and ran outside to see the neighboring village ablaze. She knew she didn’t have much time. The attackers would be there quickly. She ran back inside, gathered her children and they started to run. They crossed the rocky terrain outside her home, passing the Iroko trees, spider plants and yellow bush.

Boko Haram, one of the most infamous terrorist groups in the world, flooded their village with soldiers and guns. Founded in 2002, the group exploded on the scene in 2009 during a failed uprising in northern Nigeria. Their run of death, sexual violence and destruction has lasted for a decade.

“The fire had [burned] Guyaku and the Tela Bala police station, we ran to the primary school. We went and hid there, bullets kept flying over our heads,” Rikiya explains.

By late night, Rikiya and her children made it to the next town and found shelter. “From there, we went to Gombi and proceeded to Yola,” Rikiya says. They stayed there for two months before it was safe to return. “When I came back, it was not easy for me. I was a widow with three children. It was not easy,” she says, pinching her eyes to hold back the tears. She pauses through the pain.

“I was so traumatized; my husband was gone, and Boko Haram had captured our village. We had nothing except the cloths on our body,” Rikiya shares.All she could do was pick through the rubble. She found a few larger pieces of burnt corrugated metal and made a small shelter.

Today, Christians in northern Nigeria, like Rikiya and the people in her village, live in constant threat of attacks and on-going persecution from extremist groups like Boko Haram. Your prayers and support are critical in this region.

“I am healed [from my trauma], and I always tell people you healed me,” Rikiya shares. “Thank you.”

Children from Rikiya’s village, including her son (far left) and her daughter (blue dress).

Rikiya’s life has been full of difficulties and loss, but through it all, God has stayed near to her. Your support has changed her future and given her new hope.

God has used your prayers and support to show Rikiya that her name indeed does mean, “exalted by the Lord.”