Home News Give A Goat To Refugee Christians In Uganda 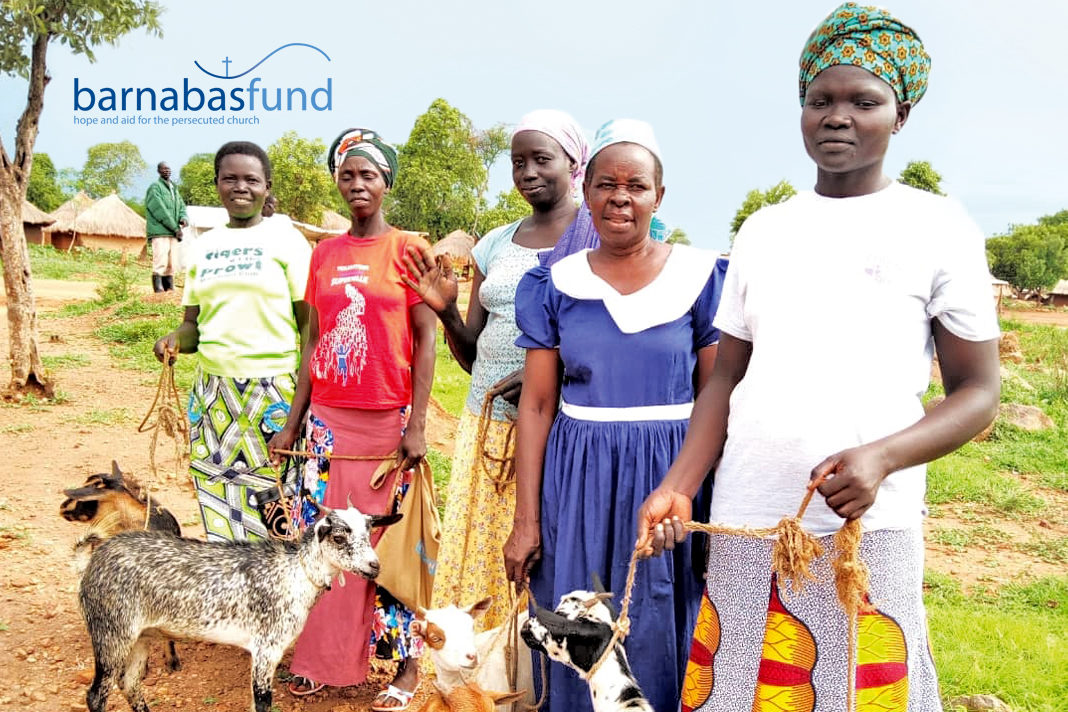 “And my God will supply every need of yours according to his riches in glory in Christ Jesus”. (Philippians 4:19, ESV)

The living gift that grows and grows and grows …
Our Christian brothers and sisters in South Sudan have experienced terrible trauma and suffering in their war-torn country. As many as two million of them have been forced to flee conflict and famine, to seek refuge in neighbouring countries.

Many of these stricken Christians settled in Camp Rhino, a vast refugee camp in Uganda. But, though now safe and far from the violence, these Christians are destitute with no means to become self-sufficient, for they had to leave behind not only their possessions but also the land that was so essential for those who were subsistence farmers.

The gift of a goat can change everything for destitute refugee Christians
Through Barnabas, Christian refugee families are each getting a female goat that will enable them to rebuild their lives and livelihoods once more. Feeding on waste scrubland, the goat provides nutritious milk as well as manure to fertilise crops. By selling the excess milk or offspring, the refugee families are able to make a modest income that can buy them food and medicine and send their children to school. Selling just one young goat provides the family with enough money to pay for a child’s school fees, including all their school essentials, for a whole year.

Families are required to pass on the first female kid born from their goat to another “goatless” family who, in turn, will do the same once their female goat gives birth. And so, the wonderful multiplication process begins with the average female goat producing one to three kids twice a year. Thousands of Christian families will gain nourishment and a means of income as the goats are distributed. The road to self-sufficiency opens up to them, restoring both sustenance and self-respect. 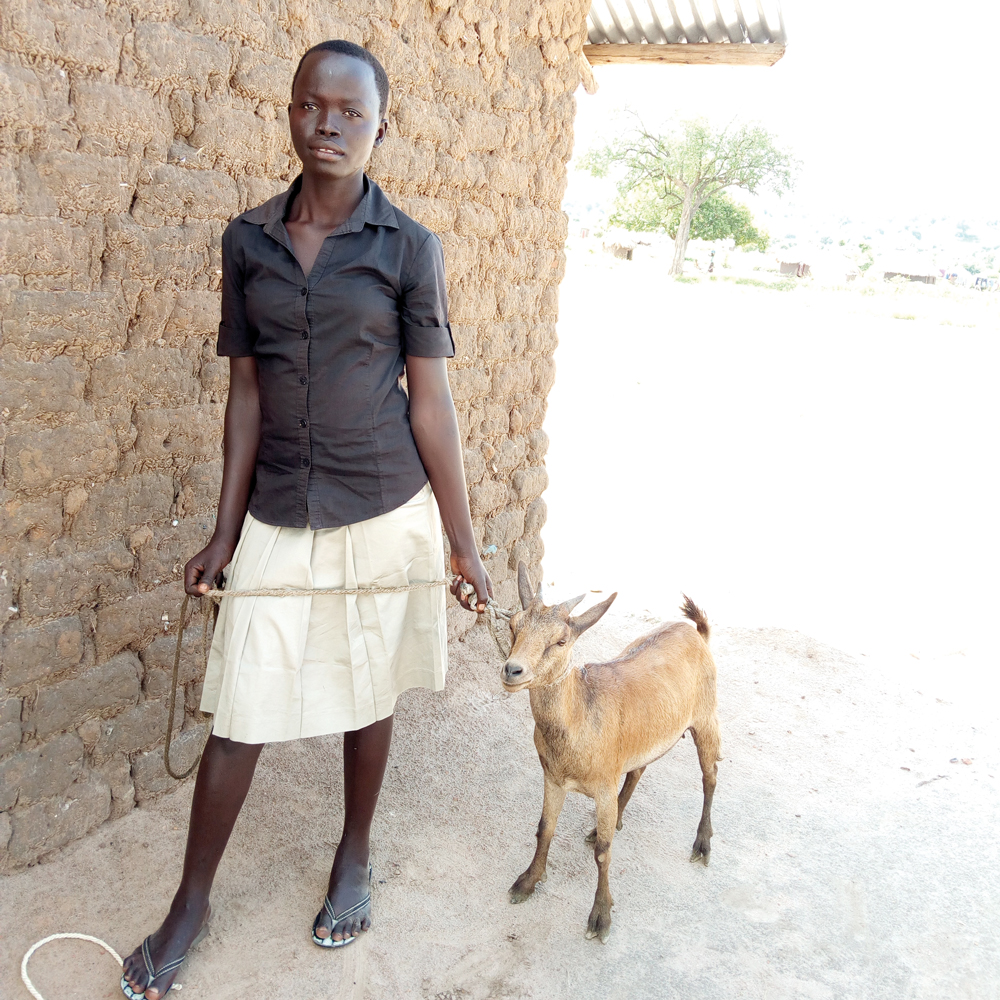 Janet, an orphaned refugee, gratefully told us, “I thank God that I was among the goat beneficiaries … Thank you so much Barnabas Fund! My goat has produced a she kid which gives me hope for income.” The income from her goat has enabled Janet, who dropped out of school due to the conflict in South Sudan, to return to her education, setting her on a path to a brighter future.

Life-changing help for an orphan boy
Gideon lost both his parents to the violence in South Sudan. We can only imagine the distress that must have engulfed him, orphaned and alone in the vast refugee camp. For many poverty-stricken children like Gideon, being able to attend school is something they long for, and their only hope of a better future, but simply have no means to achieve. Gideon could barely survive on the meagre food rations he received in the camp let alone find a way to pay for school fees.

But the Lord made a way for him. While attending church, Gideon received practical Christian love in the form of a goat gift, sent by Barnabas supporters. Gideon now has not only a means to survive and thrive on the nourishment his new companion will give him, but will also have an income to realise his dream of going to secondary school. For Gideon, this goat has truly been a life-giving gift of love. He told us, “I am very happy for being given this goat and I pray that God will use [the goat] to be a source of income to support me every day.” The gift of a goat has helped many refugee orphans such as Gideon gain access to school. 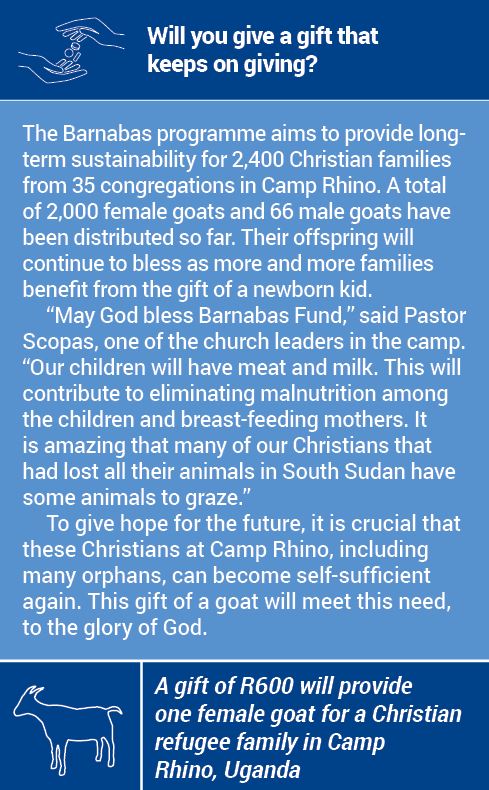 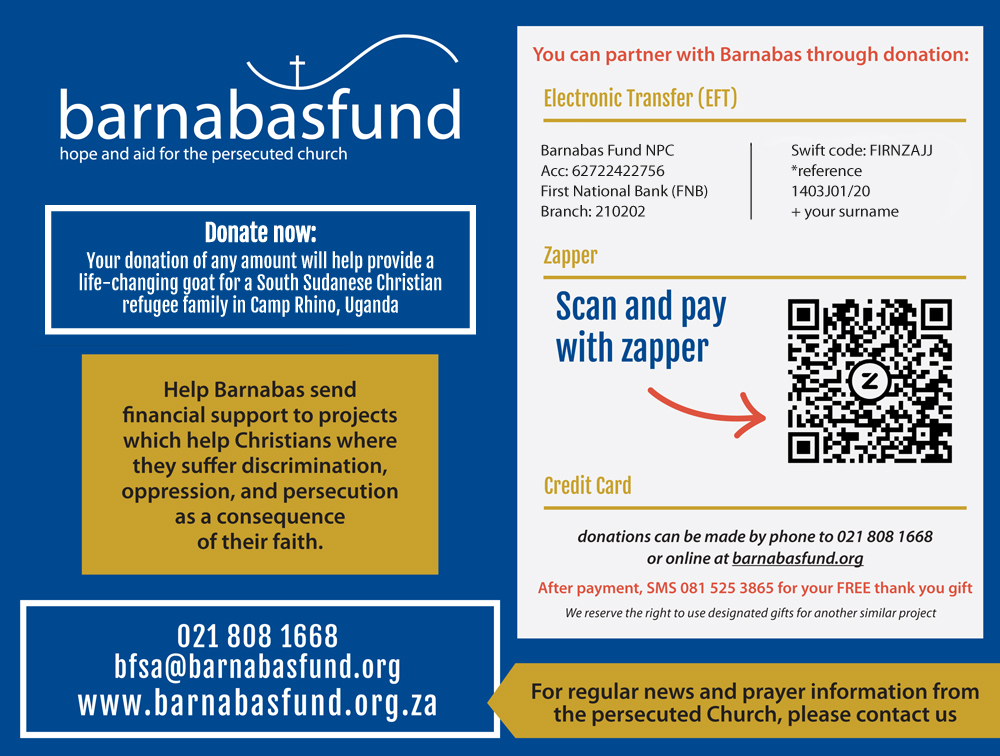