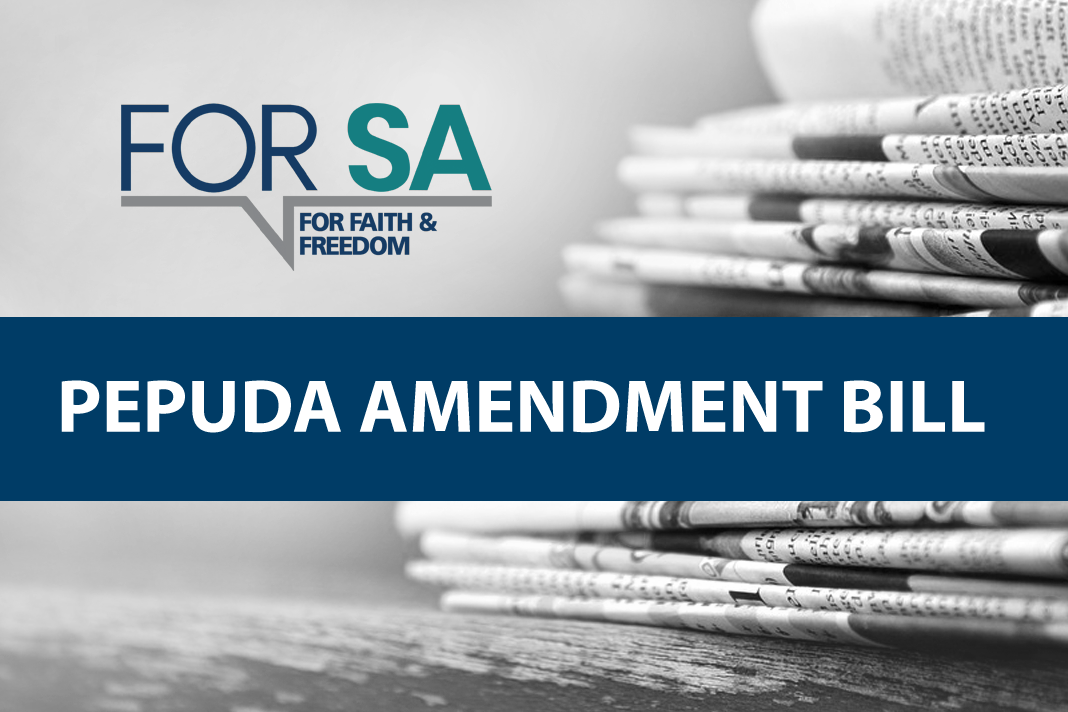 This is the first article in our series on the PEPUDA Amendment Bill (“the Amendment Bill”) and its potentially detrimental and far-reaching implications for religious freedom in South Africa, if passed into law in its current form.

PEPUDA is an acronym for the Promotion of Equality and Prevention of Unfair Discrimination Act and is otherwise known as the “Equality Act”.  It was passed into law in 2000 to give teeth to section 9 of the South African Constitution, which prohibits unfair discrimination – including “hate speech” – on a wide range of categories.  PEPUDA ranks second only to the Constitution and is the pre-eminent piece of South African legislation. All other legislation and regulation passed by the State must be compliant with its provisions.

Having carefully reviewed this proposed amending legislation, FOR SA is in no doubt that it dramatically expands the scope and reach of the original Act.  It therefore represents the most substantive threat to religious freedom specifically – and to freedom generally – that we have faced since South Africa became a democracy in 1994.

Our concerns have been exacerbated by the Department of Justice’s refusal to grant a general extension to 12 May 2021 deadline because “the Department needs to deal with this matter urgently.”  Although they have agreed to accept written submissions until 30 June 2021, why is this matter so urgent?  And why the haste to push it forward?

It is worth noting that although the Constitution does not establish a hierarchy of rights and all human rights are therefore equally worthy of protection, it is often people who express and live out religious or conservative values who find themselves in the cross hairs of this law.  PEPUDA is frequently used by activists who orchestrate and lodge unfair discrimination claims with Chapter 9 institutions such as the South African Human Rights Commission (SAHRC) and the Commission for Gender Equality (CGE), and press these State institutions to litigate on their behalf using tax-payer money.

One of FOR SA’s many concerns about the PEPUDA Amendment Bill is clause 6, which states that “legal aid [can] be granted to persons who wish to institute proceedings in terms of this Act.”  This will certainly exacerbate this problematic situation, which is already biased and discriminatory since those who are litigated against have no option but to pay the often massive costs for their own legal defense.

Given that the existing Act gives significant and substantial protection against all forms of unfair discrimination, FOR SA is challenging why this Bill has been introduced at all?  It is not only unnecessary, but when viewed in its entirety, it extends the scope of the Act to such an extent that it amounts to State-backed imposition of ideological values not seen since the Apartheid era.

Call to action:
Clearly, this Bill has radical implications for our religious rights in South Africa and we must oppose it.  FOR SA therefore calls upon every individual and every denomination, church and other faith organisation, to make your voices heard on this Bill by making a submission to the Department of Justice before Friday, 30 June 2021.  (Although the deadline for submissions on the Bill was on 12 May 2021 already, the Department has indicated to FOR SA that it would accept submissions until 30 June 2021).

A template submission (both for individuals, and for organisations) is available on the FOR SA website, which can be used “as is” or adapted and e-mailed to fbhayat@justice.gov.za

For more articles like this that explain what the PEPUDA Amendment Bill is about, and why it is such a major threat to religious freedom, visit our website at www.forsa.org.za  or follow us on Facebook at “Freedom of Religion SA”.

Please like and share this article far and wide so we can push back against this unnecessary and unconstitutional government overreach into our lives!