Home News Pro-Abortion Pastor: Getting An Abortion Made Me Feel ‘Holy’ And ‘Loved By... 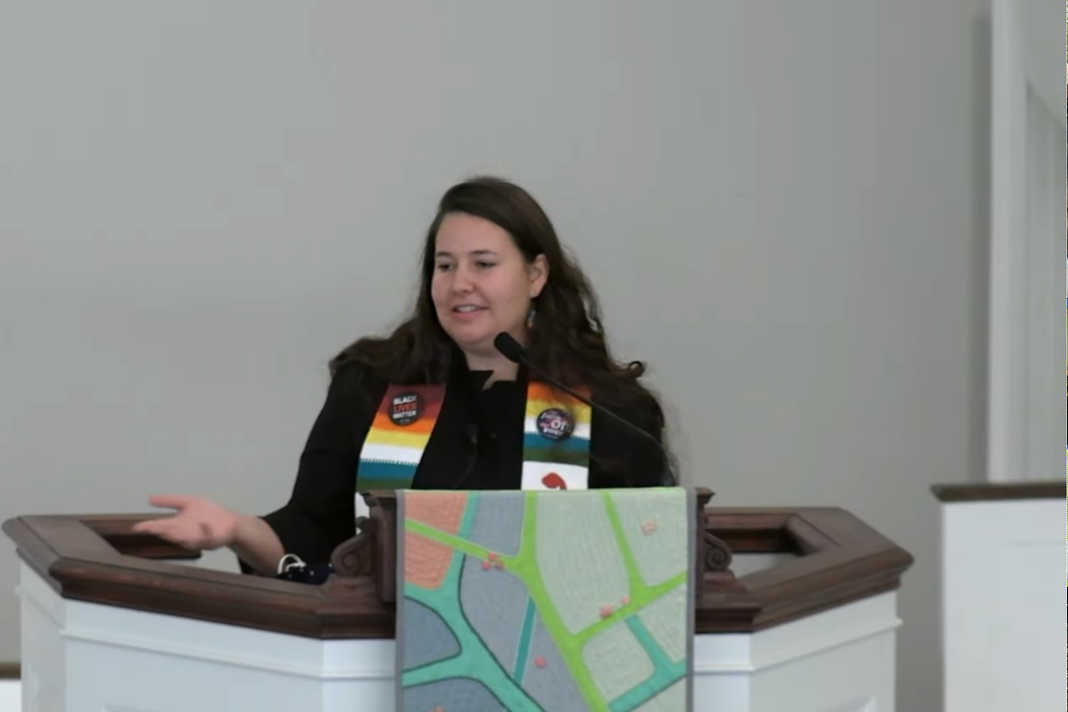 A pastor for the United Church of Christ was highlighted by the Washington Post for her unusual take on abortion, stating that she believes abortion is not only acceptable for Christians, but can also be a holy experience.

Rev. Kaeley McEvoy began preaching at the Westmoreland Congregation in 2018, but only decided to share her own abortion story last November, in response to the passage of pro-life laws. Interestingly, McEvoy told this story while referencing Psalm 139, which contains the following passage:

For you created my inmost being; you knit me together in my mother’s womb.

I praise you because I am fearfully and wonderfully made; your works are wonderful, I know that full well.

My frame was not hidden from you when I was made in the secret place, when I was woven together in the depths of the earth.

Your eyes saw my unformed body; all the days ordained for me were written in your book before one of them came to be.

Specifically addressing this passage, McEvoy began: “Psalm 139 is often used as a biblical condemnation of a woman’s right to choose the best reproductive option for herself and for her family,” she said. “The declaration of God knitting life in a woman’s womb is used frequently to manipulate a narrative of reproduction which omits abortion as a sacred decision. The misinterpretation of this psalm has caused harm, and invoked shame on a measurable number of women. But within the context of this prayer, the relational God portrayed has nothing to do with the science of embryos, but has everything to do with the fullness of being known.”

“The author of Psalm 139 is not talking about cells being known; the author is talking about stories being known,” she continued. “Psalm 139 exposes a relationship with God who knows and loves her children so fully and fiercely, that the entirety of their story from beginning and end, and every threshold in between, is known and heard.” (emphasis added)

Then, perhaps most stunningly, she added, “I personally have never felt more known and loved and heard by God than when I entered the doors of a Planned Parenthood on Bleaker Street in New York City… that morning, I made the decision to receive an abortion.”

More recently, the Washington Post reported that McEvoy met with a group of abortion activists inside a Washington, D.C. church, where she remarked, “Something holy is happening here, friends.”

Sadly, McEvoy is not the only religious leader to call the act of deliberately killing an innocent preborn child “holy.” The Washington Post pointed out that 450 clergy and “faith advocates” met for a two-day virtual event called SACRED, where they discussed the “right” to abortion. George Demacopoulous, a Fordham University theology professor and expert on Orthodox Christianity, told the Post that being pro-life is theologically wrong. “It’s a Christian truism that you can hold seemingly contradictory views,” he said. “Christian moral teaching isn’t black and white.”

Rev. Angela Williams, a Presbyterian USA pastor and lead organizer of SACRED, argued that Bible verses don’t relate to people in real life. “Being in this work and spending time with people and hearing more of the stories and bringing their experiences out of the shadows helped me to undo the stigma around abortion,” she said. “[Religious advocates for abortion rights] have given up the public square, letting the dominant narrative be based on some readings of Bible verses. And that doesn’t represent real people, real lives, real faith.”

These pastors all disregard the Fifth Commandment: you shall not kill. And while post-abortive women undeniably deserve love and compassion instead of anger and hatred, that does not mean God smiles upon the destruction of human beings (born or preborn) who are made in His image. The condemnation of abortion has deep theological roots, and the sanctity of human life is a core Christian value. Ignoring that is not doing God’s work.