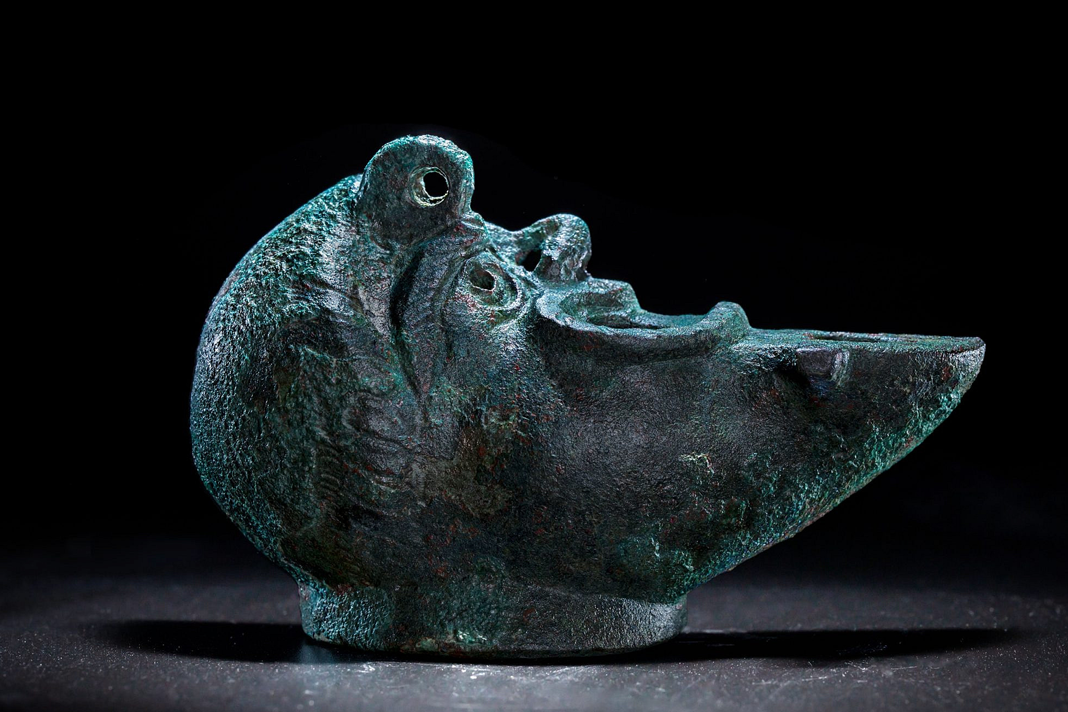 A rare bronze oil lamp shaped like a grotesque face was recently discovered in excavations conducted by the Israel Antiquities Authority (IAA), in the City of David National Park.

Israel Antiquities Authority archaeologists, Ari Levy and Dr. Yuval Baruchbelieve the lamp, discovered in the foundations of a building on the pilgrimage road, was intentionally buried in order to bring good luck to the building’s residents.

“The offering of this lamp may attest to the importance of the building, which may have been linked to the protection of the Siloam Pool, the city’s primary water source,” they said. The building on the Pilgrimage Road where the bronze oil lamp was uncovered. Photo by Koby Harati, City of David

The lamp is thought to have been deliberately buried in the foundations of the building during the Roman Period, subsequent to the destruction of Jerusalem in the late 1st or early 2nd century CE.

“Foundation deposits (offerings) were prevalent in the ancient world, and were intended for luck, and to ensure the continued existence of the building and its occupants, and they were usually buried under the floors of buildings or foundations,” explainedLevy, director of the excavations at the site.

The artifact is actually only half of a lamp. It was poured into a sculpted mold that was shaped like half of a face of a grotesque-looking bearded man. The tip of the lamp is shaped like a crescent moon, and the handle is shaped like the Acanthus plant. The decoration that appears on the lamp is a common Roman artistic motif, similar to a theatrical mask. 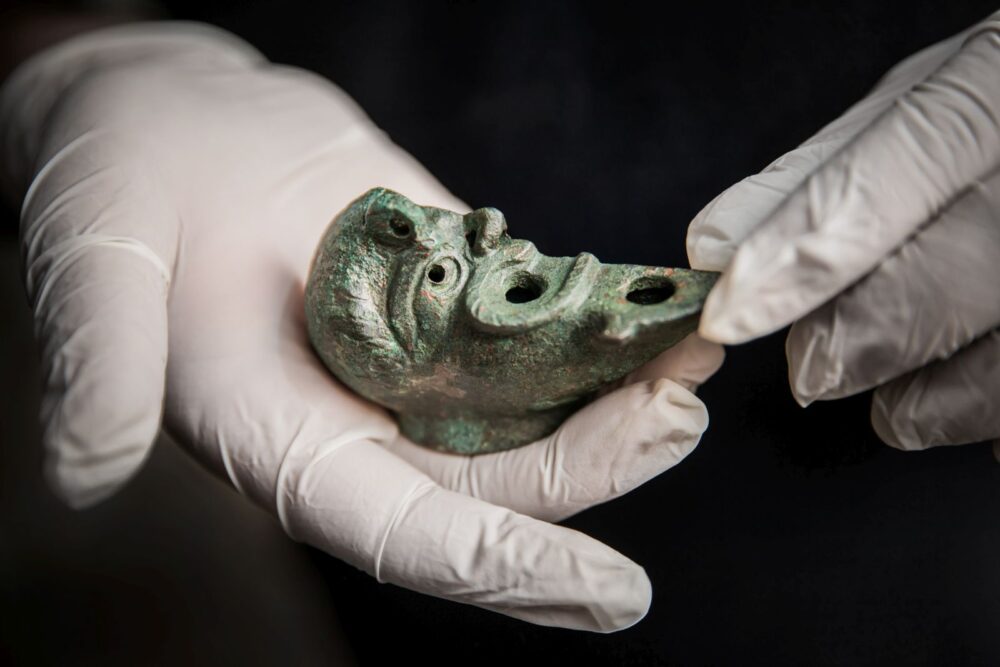 The half oil lamp discovered in the foundations. Photo by Koby Harati, City of David

According to the archaeologists, “This lamp is a very unique find, and as far as we know, the first of its kind discovered in Israel. The uniqueness of the current object is that it is only half a face.”

Researchers are debating what this means. They believe it may have been attached to a flat object or wall, serving as a wall lamp, but have not ruled out the possibility that it was used in a ceremonial ritual. 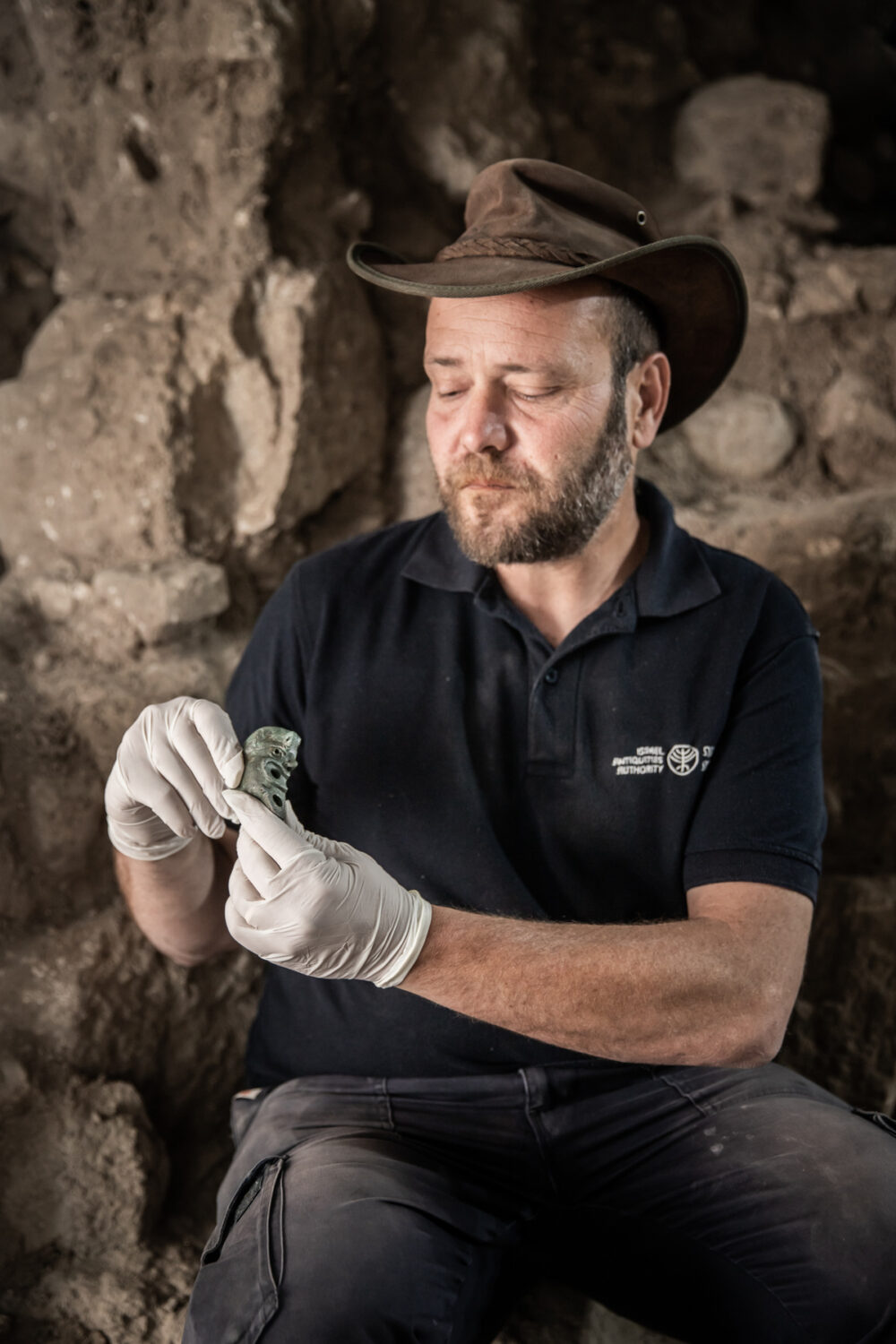 Archaeologist Ari Levy of the Israel Antiquities Authority, with the lamp he found. Photo by Koby Harati, City of David

After the bronze lamp was found, it was handed for treatment and preservation to the metal laboratory of the Israel Antiquities Authority. There, archeologists discovered a rare and unusually preserved flax wick inside the lamp.

“Decorated bronze oil lamps were discovered throughout the Roman Empire. For the most part, such oil lamps stood on stylish candelabras or were hung on a chain,” said Baruch.“This half of a lamp, and in fact half a face, is a very rare object, with only a few discovered in the whole world.”

Date published: 06/06/2021
Feature image: The oil lamp was discovered in the foundations of a building and thought to have been buried to bring good fortune to inhabitants. Photo by Koby Harati, City of David