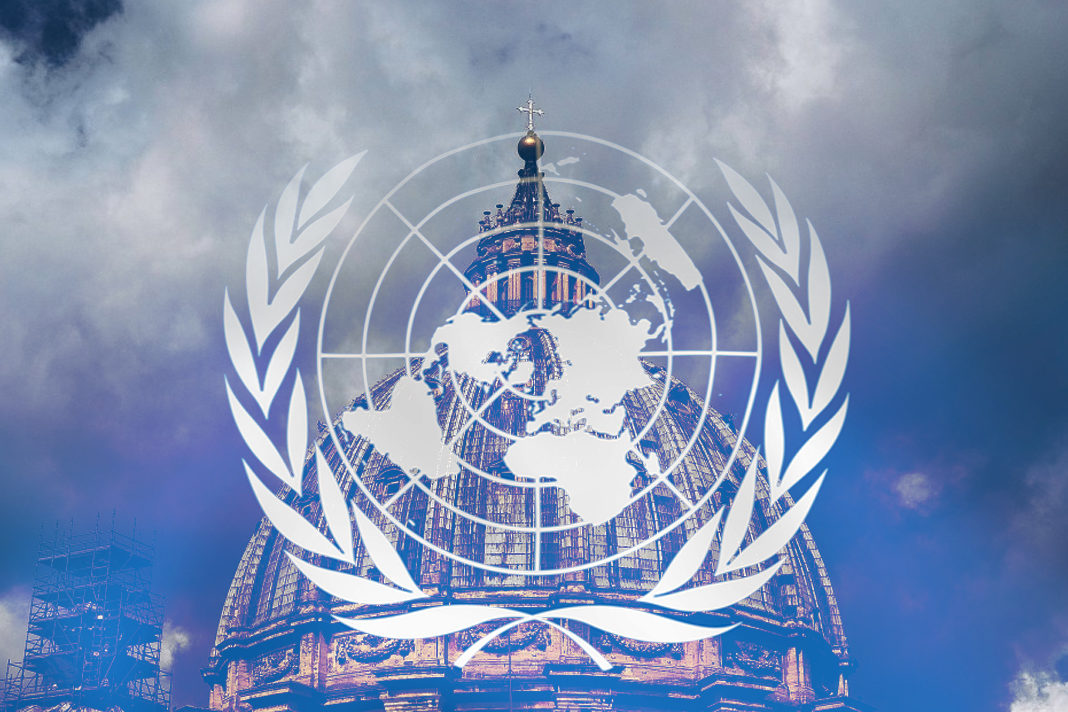 Many of you will have heard about the 2030 agenda that the United Nations are pushing. But there is an interesting connection that many of you may not have seen before. Why have the United Nations picked the year 2030? And what is the 2030 agenda? If you look at the official UN website dealing with the ‘sustainable agenda’, you will see their ‘goals’, which cover food, health, education, gender, energy, work, land, sea, and just about every aspect of our lives. And their slogan? ‘Leave no one behind.’ This is from their website:

“The Sustainable Development Goals are a call for action by all countries – poor, rich and middle-income – to promote prosperity while protecting the planet.” (source) … “Today, progress is being made in many places, but, overall, action to meet the Goals is not yet advancing at the speed or scale required. 2020 needs to usher in a decade of ambitious action to deliver the Goals by 2030. With only ten years left to achieve the Sustainable Development Goals, world leaders at the SDG Summit in September 2019 called for a decade of action and delivery for sustainable development, and pledged to mobilize financing, enhance national implementation and strengthen institutions to achieve the Goals by the target date of 2030, leaving no one behind.” (source)

“All countries, rich and poor … leave no one behind”?? Sounds a lot like Revelation 13:16-17 …’And he causeth all, both small and great, rich and poor, free and bond, to receive a mark in their right hand, or in their foreheads: And that no man might buy or sell, save he that had the mark, or the name of the beast, or the number of his name.’

But why is the 2030 date so important to them? Pay close attention!

Let us look at the connection between the UN 2030 agenda and the return of Christ. In the story (parable) of the good Samaritan in Luke 10:30-35, Jesus sets forth some very interesting symbolism. We all know the story well, how a certain man was robbed and beaten and left for dead, and a Levite and a Priest passed by without helping him, but a Samaritan came along and helped the man, took him to an inn and gave two pence for his stay at the inn, saying, “when I come again” I will repay any more.

The symbolism is clear. The man robbed, beaten and left for dead represents us sinners, beaten and left for dead by Satan and sin. The priest and Levite who pass by without helping, represents the law, which cannot save us from sin. The good Samaritcan represents Jesus Christ, the only one who can help us. The Inn, which the Samaritan takes the man to, represents God’s kingdom and church on earth, where Jesus gathers His people to take care of each other. But what about the ‘two pence’ the good Samaritan gave the host? Why two pence? Remember who the Samaritan represents? Jesus. So what does the two pence represent? The Samaritan (Jesus) is saying … “this two pence should be enough until I return.” Now look at another parable Jesus gave:

Who does the vineyard belong to? God. And the vineyard is the earth. Who are the labourers in that vineyard? God’s church on earth. And how much was to be the pay for the work? A penny for ONE DAY. Now remember that in the good Samaritan story, the Samaritan (Jesus) gave the host (the church) two pence UNTIL HE WAS TO RETURN. So if one penny was for one day, then two pence would be enough for two days work. So if you put both parables together, Jesus is giving the church two pence for ‘two days’ UNTIL HE RETURNS. Now look at what Peter said:

One day is as a thousand years with God. So what would TWO days (two pence) be? Two thousand years! Do you see this? Was Jesus saying through this parable that He would return in around 2000 years time?

Now we are NOT setting any dates here, and neither should anyone say “Oh I have 10 years to get ready, plenty of time!”, because as the apostle Paul said, God will “finish the work, and cut it short in righteousness.” (Romans 9:28). We are merely showing you that the second coming is ‘AT THE DOOR’ (Matthew 24:33), and why there is such a push by the UN to gain control by 2030.

Does Satan know the scriptures? Does he know the prophecies? Yes, he knows the Bible better than anyone here on earth. Does he know about God’s 6000 year timeline? Yes. Does he know when the second coming of Jesus is literally ‘at the door’? Yes. This is why there is an urgency now in this world to ‘gather’ everyone under this United Nations 2030 plan. It is Satan’s plan to gather the world under Rome’s leadership, and cause everyone “both small and great, rich and poor, free and bond, to receive a mark in their right hand, or in their foreheads.” (Rev.13:16).

They are seeking to get this done by 2030, knowing that the return of Christ and end of this world as we know it is literally ‘at the door.’ Why do you think they are screaming about ‘climate change’ and saying ‘we only have 10 years left to do something’? They are looking to “save” this planet from it’s coming destruction at the hands of our Lord and Saviour Jesus Christ. And what will be their “solution”? Rome’s Sunday law!

Oh friends! I pray that this would open your eyes and wake you up to where we are in history. I pray that this would cause you to make a more full surrender of your life to Jesus. And please don’t think that merely sitting in your church will keep you safe, as Satan has captured the majority of churches in this world now, and they have become part of fallen Babylon. Our only safety is in the arms of Christ – WE ARE COMPLETE IN HIM.