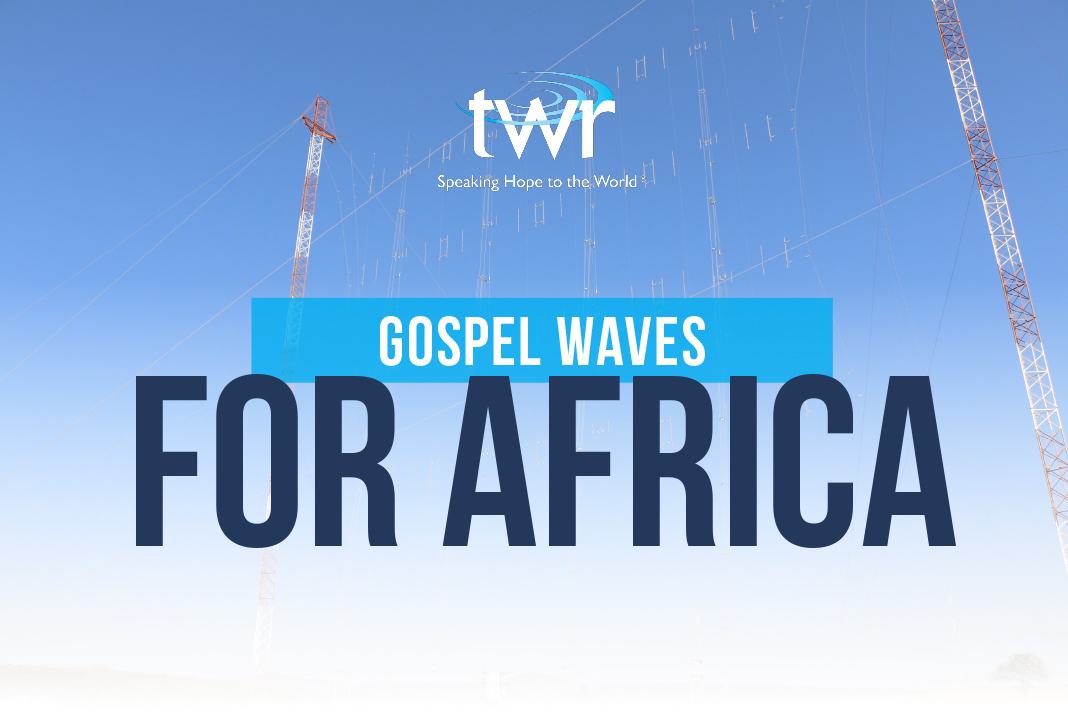 Needless to say, the technical aspect of media is quite vast, but by God’s grace TWR Africa is blessed with skilled and dedicated workers that keep our ministry relevant, applying new and advancing technology as it becomes available.

TWR’s international media ministry is dependent on computer networks and the people who run them. Our dedicated Technical Services Department has two teams, namely the Technical Team and the IT/IS Team. Together, they keep transmissions running smoothly. Their tasks vary from preventive and corrective maintenance on curtain antennas, maintenance of equipment and transmission lines, to support of office networks, software, and hardware and ensuring TWR Africa’s IT systems operate in a secure and stable manner.

TWR has two transmitting stations that cover almost the entire sub-Saharan Africa; one in Eswatini and one in West Africa. In total, TWR Africa brings hope in more than 82 languages and dialects and engages millions of people in more than 50 African countries. In addition to short wave and medium wave, through new technology, we reach sub-Saharan Africa through internet streaming, the TWR Africa App, and Satellite. We also partner with FM affiliates in many African countries who broadcast TWR Africa content from their local radio stations in the heart languages of the respective country, city, or region.

Eswatini Transmitter Tower (ESWATS)
TWR’s broadcast facility in Eswatini (formerly the Kingdom of Swaziland) has aired programmes to the people of southern Africa for more than 45 years. The Eswatini operation comprises three 100-kilowatt short-wave transmitters, and one 100-kilowatt as well as a 50-kilowatt medium-wave transmitter. These powerful transmitters ensure that the TWR broadcasts are heard way beyond the borders of that small country. This transmitter station went on air in November 1974, with programmes in English, Afrikaans, German, Zulu, and Portuguese throughout sub-Saharan Africa. The programmes addressed the needs of women, youth, emerging leaders, and more. Today the transmitter in Eswatini broadcasts in approximately 30 languages. The number varies as new productions become available and unsponsored programmes are revised. Practical information, daily advice, and most importantly, sound Biblical teaching reach the ears of a large portion of Africa 24 hours per day, every day of the year. 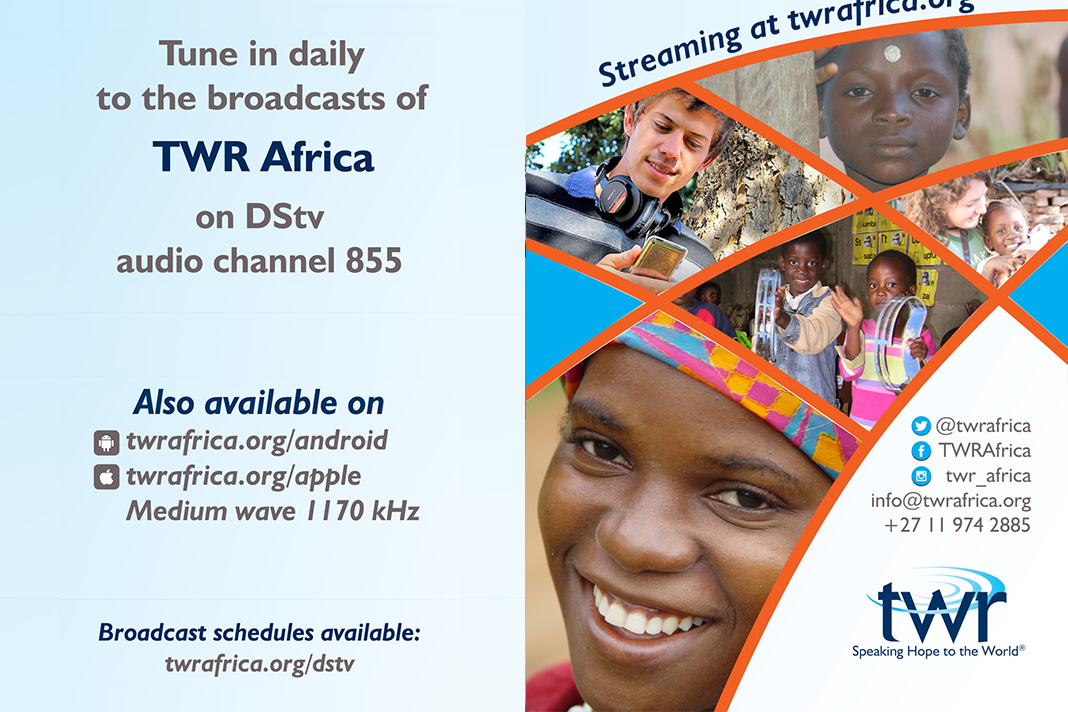 West Africa Transmitter Tower (WATS)
On 1 February 2008, at 4 am, the first broadcast of the Gospel of Jesus beamed from the newly built TWR Transmitter Station in West Africa! The 100-kilowatt medium-wave transmitter broadcasts to nine countries in 27 languages, depending on available programming, with a total potential audience of approximately 190 million people. Reaching across barriers of darkness, fear, and hopelessness in the West African region, TWR brings hope and provides biblical guidance to the people in this region. With the recent installation of an additional powerful new 200-kilowatt medium wave transmitter, TWR Africa can now take the Good News further into Nigeria and strengthen the Church there, broadcasting hope into all of Nigeria, as well as to neighbouring countries Cameroon, Benin, and Niger.

Support Services
The complex radio broadcast schedule across Africa is co-ordinated by the TWR Africa Support Services Office, located near Johannesburg, South Africa. The schedule features many internationally renowned broadcasters, as well as regionally produced and focused programmes such as Witness at the Water, Foundations for Farming, Women of Hope, Equipped for Life, and The Prophets. New programmes in more languages are added on a regular basis. 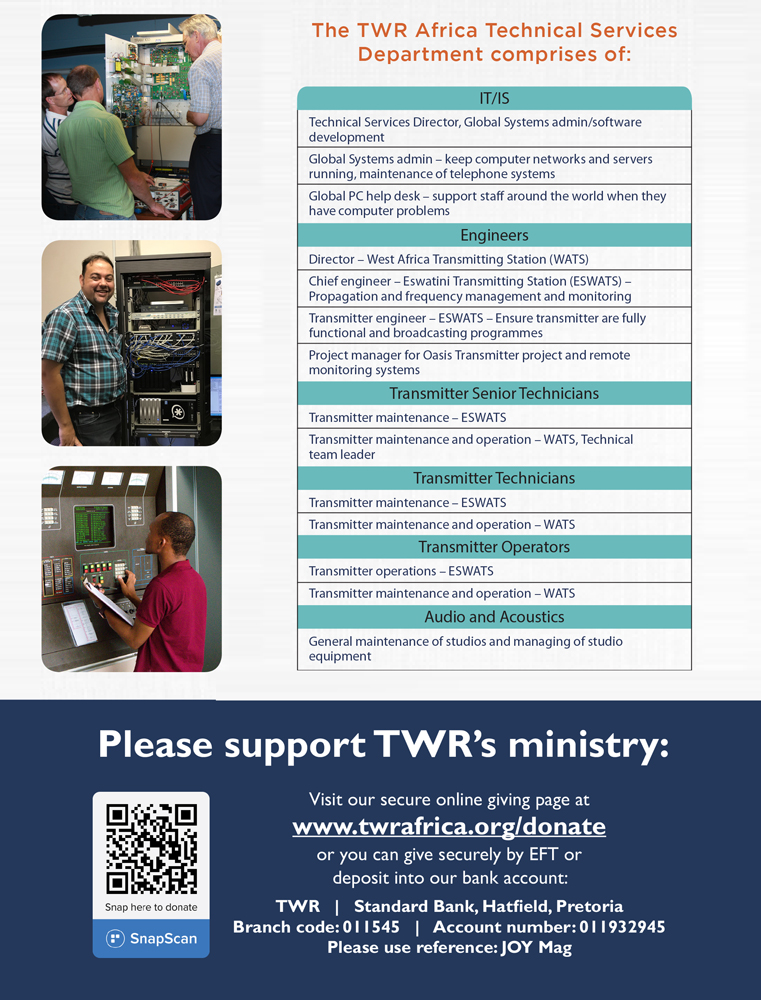