Home News ‘We Have An Obligation To Get It Done’: President Trump Unveils Middle... 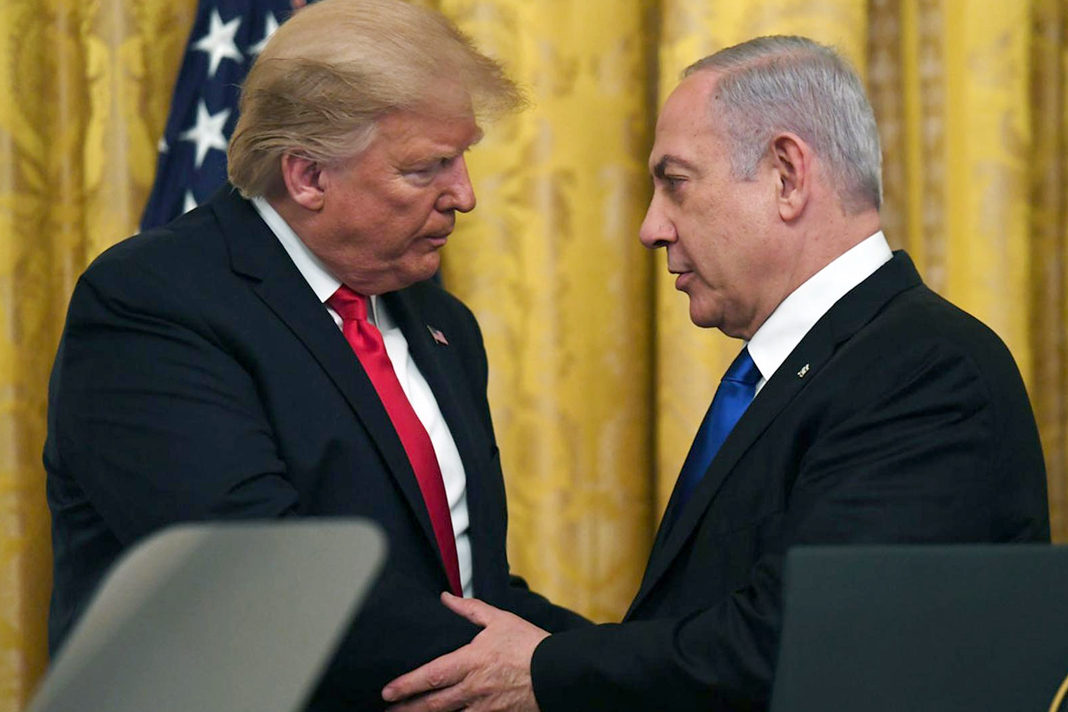 With Israel’s Prime Minister Benjamin Netanyahu on hand, Trump laid out his vision. It would create a continuous Palestinian state with its capital in East Jerusalem. “This map will more than double the Palestinian territory and provide a Palestinian capital in eastern Jerusalem where America will proudly open an embassy.”

Israel Agrees
And Israel agrees. For the first time since discussions of a two-state solution began, Israel has authorized the release of a conceptual map. Previous discussions had not gotten to the point of saying how the land would be divided. This one does. That’s huge. 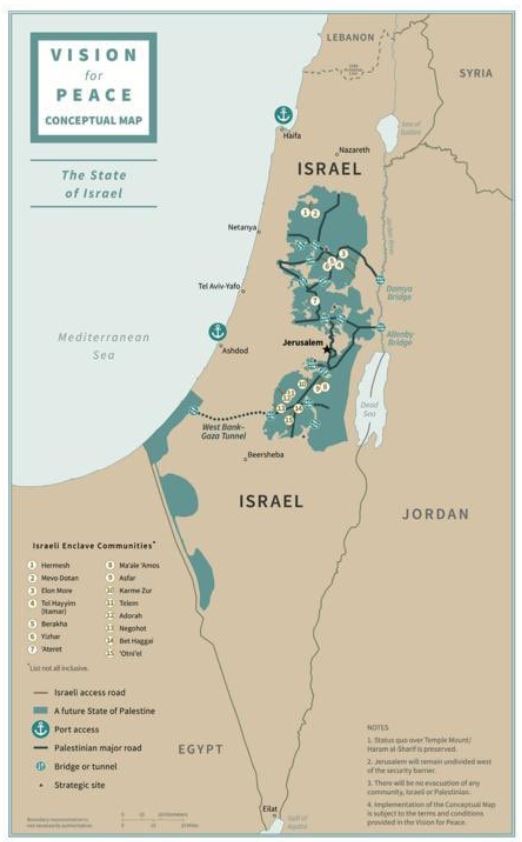 The title, “Peace to Prosperity,” describes the hope behind the proposal. As does the subtitle, “A Vision to Improve the Lives of the Palestinians and Israeli People.” Some highlights from the plan:

“This is a great deal,” Trump said. “And the Palestinians may not have this opportunity ever again.”

Palestinians Reject the Effort Outright
Are they even interested in the so-called “Deal of the Century”? Abbas quickly denounced the proposal, calling it a “conspiracy deal.” Said Abbas, “Trump and Netanyahu declared the slap of the century, not the deal and we will respond with slaps.”

The Palestinian leader did say in a speech in Ramallah he was open to negotiations, as long as the U.S. wasn’t involved. Palestinian leaders cut off communications with U.S. officials in 2017 after Trump recognized Jerusalem as the capital of Israel.

Abbas says the Palestinians have to have Jerusalem or no deal. In the plan, the East Jerusalem capital city begins only at the outskirts of the city. It does not include any part of the coveted old city.

The plan also calls on Palestinians to reach certain benchmarks on the path to the nation of Palestine. These include rooting out terrorism and stopping payments to the families of killed terrorists. Said Trump, “We are asking the Palestinians to meet the challenge of peaceful coexistence.”

Do the Palestinians Want Peace?
But how serious is Abbas about wanting peace? Reports Haaretz, “In a rare display of unity, members of the Palestinian Liberation Organization, Hamas and the Islamic Jihad are attending Abbas’ speech in Ramallah.”

While Abbas was joined by terror organizations, Netanyahu was joined by ambassadors from United Arab Emirates, Oman and Bahrain. He applauded the plan as a basis for negotiations, calling it a “realistic path to a doable peace.”

Netanyahu also said if the Palestinians are genuinely prepared to make peace with the Jewish State and abide by the conditions of the peace plan, Israel is ready to negotiate peace right away. “I hope that the Palestinians embrace this,” he said. “Israel will not miss this opportunity.”

Democrats Say Yes and No, Iran Says No
Democrats were offering a mixed response to the White House proposal.

Speaker Nancy Pelosi thought the plan offered “common ground” Democrats could support. “So let us be optimistic and hopeful and let us pray for peace.” House Foreign Affairs Committee Chairman Eliot Engel (D-N.Y.) said the two-page summary he saw before the release “gives me some hope.” He was waiting to see the details.

Senator Elizabeth Warren, however, blasted the plan. “Trump’s ‘peace plan’ is a rubber stamp for annexation and offers no chance for a real Palestinian state,” she said. “Releasing a plan without negotiating with Palestinians isn’t diplomacy, it’s a sham. I will oppose unilateral annexation in any form — and reverse any policy that supports it.”

Iran called the plan a “nightmare,” “the dream project of a bankruptcy-ridden developer.” The country funds Hamas and Hezbollah to foster terrorism against Israel from Palestinian territory.

On the Other Hand, the UAE and Egypt
The United Arab Emirates, Oman and Bahrain attended the announcement. Other Arab nations also voiced their support. Not exactly for the plan as it is, however. They endorsed it as a good beginning for Israel and the Palestinians to talk.

United Arab Emirates said the plan “offers an important starting point for a return to negotiations within a US-led international framework.”

Egypt, the first Arab nation to make peace with Israel, said the same. “Egypt calls on the two relevant parties to undertake a careful and thorough consideration of the US vision to achieve peace and open channels of dialogue, under US auspices, for the resumption of negotiations.”

Don’t miss that: Arab nations urging the Palestinians to come back to the table … with this Israel-supported plan as a starting point. Also, don’t forget there is plenty of Palestinian sweat equity in the plan. Palestinian negotiators had met with the U.S. peace team led by Trump’s son-in-law Jared Kushner 37 times, by the Wall Street Journal’s count, before pulling out.

Will there now be pressure to come back in?

Could This Plan Work When Others Failed?
President Trump acknowledged the historic difficulty in finding a solution to Israeli-Palestinian conflict. There’s a momentous hill yet to climb. Even for the man who wrote The Art of the Deal. He admits there’s no tougher deal to seal than bringing Israel and the Palestinians to live peacefully as neighbors.