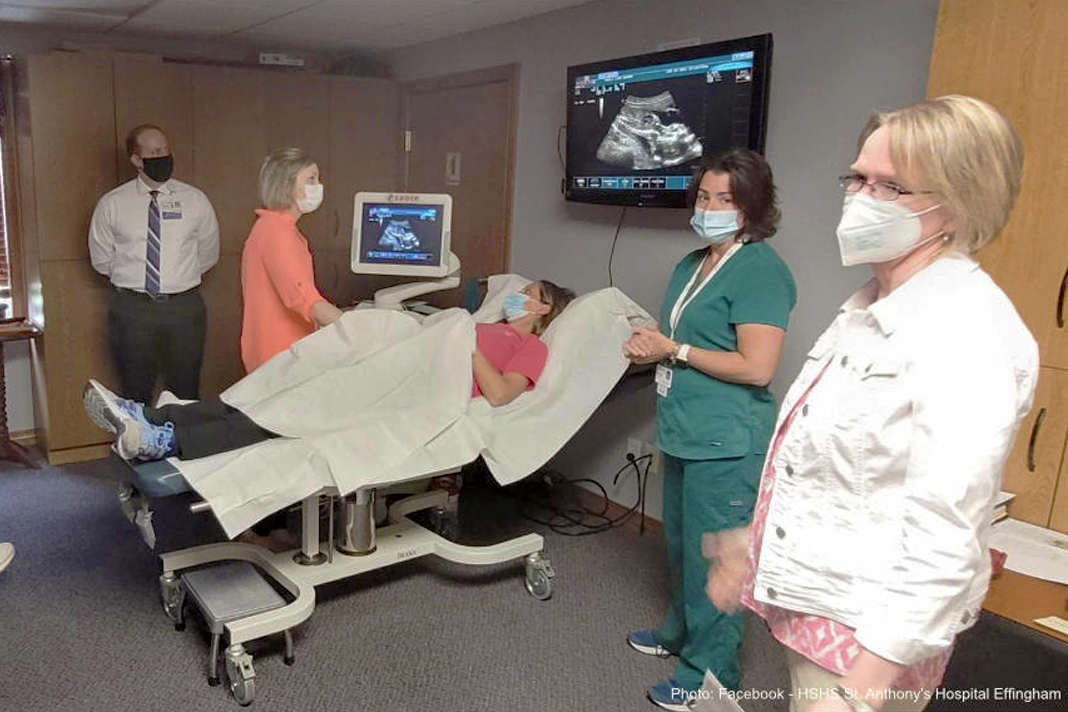 For the seventh time since 2014, senior high school students from Effingham, Illinois, recently got a look at life in the womb thanks to a unique partnership between their school, the community pregnancy resource center, and the local hospital.

‘Window to the Womb‘ is the brainchild of Effingham resident Valerie Kemme, who conceived the idea after reading articles about the high percentage of abortion-vulnerable women who choose to keep their babies after viewing ultrasounds.

Kemme wondered, “What if we were able to get everybody to see an ultrasound?” Aware that the abortion industry acts as if “that’s not a baby” inside the pregnant woman’s body, Kemme thought, “Wouldn’t it click with so many more people if they would see what’s really going on in the womb, then they would value life?”

Kemme’s first contact was with the religion teacher at the local Catholic high school “to see if they were even open to having the students even have this kind of experience.” While the teacher was very enthusiastic, getting buy-in from the hospital proved more challenging initially. Kemme and the teacher started with a bottom-up approach, speaking to staff at various departments in the hospitals, who were all supportive of the idea; however, a champion was still needed to make the project a reality.

Ultimately, Kemme told Live Action News, “It was kind of a God thing. I was talking to somebody about another project and they mentioned this director of philanthropy at the hospital… it kind of clicked with me, ‘Hmm. Maybe we could talk to the director of philanthropy and he would know who we could talk to.’” Once she spoke to the director, she said “he jumped on it; he was really on board and within a week he was talking to the heads of the imaging department and the CEO of the hospital, and the CEO is actually who made this project possible.”

The top-down approach of the CEO’s support for the project quickly opened all the necessary doors to launch the project, in which seniors at St. Anthony High School travel to St. Anthony Hospital to view an ultrasound as part of their senior religion class study of the sanctity of human life.

The first six Window to the Womb events occurred at the hospital. But this year, to maximize safety for all involved, the Family Life Center — a local pregnancy resource center — hosted the event on a day when the building was closed to the public. “That ended up being a real blessing because so many of the students weren’t even familiar with the Family Life Center,” said Kemme. The presentation this time around included a tour of the facility for students before they saw the ultrasound.

In the ultrasound room, Kemme said, “The first few minutes, they’re looking at the screen and the ultrasound techs are talking to them about what they’re seeing. Here’s the heartbeat, they’re showing them different organs and pointing out things and talking to them a little bit about the development of the baby at this stage.” Then the students are engaged in what Kemme calls “a brief but frank discussion about the legality of abortion.”

She asks the students, “Do you think that the baby on this screen could legally be aborted?” and explains that under Illinois law that child could legally be killed up until birth, and that the father has no say legally. Kemme said the students typically react to this information with “a sense of surprise.”

“We want them to see the value of life,” she explained to Live Action News, “but then we also want them to understand that even though this life is so far developed and it’s so valuable, and it’s been valuable since the moment of conception, that it is not protected at all by our legal systems.”

Kemme shared that “after the students do this project, they write a reflection” on their experience. The feedback, she said, is “overwhelmingly positive” with students feeling it was “very impactful.”

Many, many comments talk about how eye-opening it was, even for students who already considered themselves pro-life.

“I’ve always been pro-life, but this opened my eyes to what I’m truly fighting for in being pro-life,” said one student.

Another shared, “I am against abortion. However, it was in seeing that sonogram that I truly understood what being pro-life is about. It is about protecting that baby, who even in the womb had arms and legs, who had a spine and a brain, who had a heart and kidneys, who hid from the camera and yawned in exhaustion. It is my job to stand up for that child – as they are just like me.”

For her part, Kemme said that when the students are watching an ultrasound, “They are just riveted to the ultrasound screen. You don’t have to make sure that they’re paying attention… It’s just a few minutes of watching it, but they’re definitely engaged.”

Since the program’s inception, Kemme has learned of “a rare few other people” doing something similar, including a school classroom in Nebraska that brought an ultrasound machine and pregnant volunteers on-site.