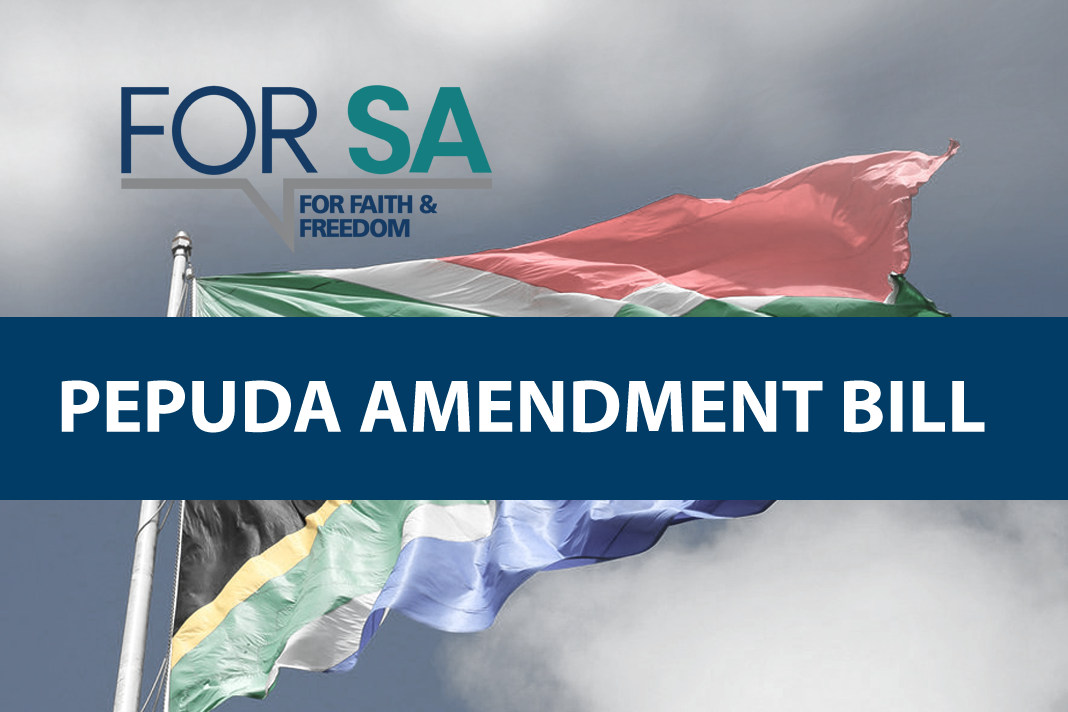 This is the second article in our series on the PEPUDA Amendment Bill (“the Amendment Bill”) and its potentially detrimental and far-reaching implications for religious freedom in South Africa, if passed into law in its current form.

As it currently stands, the Promotion of Equality and Prevention of Unfair Discrimination Act (“PEPUDA”, also known as “the Equality Act”) is already used to target people of faith and conservative values – often with claims of “unfair discrimination” or “hate speech”.

For example, in the Beloftebos case currently pending before the Cape High Court, a same-sex couple has – in terms of the existing Act – instituted an unfair discrimination claim against Beloftebos in which they claim, amongst other things, R2 million in damages. The couple’s case is that the wedding venue unfairly discriminated against them on grounds of sexual orientation, when the venue declined – on grounds of the owners’ Biblical conviction and belief that marriage is between a man and woman – to host, or otherwise participate in, their wedding ceremony at Befloftebos.

In another case currently pending before the Chatsworth Equality Court (the Chetty case), the South African Dharma Sabha has – in terms of the existing Act – instituted a “hate speech” claim against a Christian evangelist in which they claim, amongst other things, R200 000 (the claim was originally R1 million). The Hindu organisation’s case is that the Christian evangelist made himself guilty of “hate speech” against Hindus, when he shared his testimony at an open-air event.

Importantly, PEPUDA’s broad definition of “hate speech” is one of the reasons the “hate speech” section of the Act (section 10) was recently declared unconstitutional by the Supreme Court of Appeal (SCA). However, rather than waiting for the Constitutional Court to make a final judgment on this, the Department of Justice has published this Amendment Bill, which significantly expands the scope and extent of the original Act.

In this article, we look at the legal test for “unfair discrimination” as set out in PEPUDA, and examine whether (or not) the test itself is in fact “fair”. We will also look at what will likely happen in practice should the Amendment Bill become law.

The test for Discrimination:
The starting point when looking at PEPUDA’s test for “unfair discrimination”, is how the Act currently defines what ‘discrimination’ is. Amongst other things, ‘discrimination’ is defined as any act or omission (so a failure to act), that:
(a) imposes burdens, obligations or disadvantage on; or
(b) withholds benefits, opportunities or advantages from,
any person on one or more of the prohibited grounds (which are a set of 17 grounds listed in section 1 of PEPUDA and include things such as race, age, gender, sex, sexual orientation, religion, conscience, belief and culture).

Once you have shown that someone has imposed a burden / withheld a benefit from you because of e.g. your race, you have established discrimination.  The next question then is whether the discrimination was fair, or unfair, in law.

An example of fair discrimination is that our law does not allow five-year-olds to drive the family car, or buy beer or vote. The law, therefore, withholds benefits from five-year-olds that it gives to other people, which makes it discriminatory – and it does so based on age, which is a prohibited ground in terms of PEPUDA.  This would however pass the test for fair discrimination in law because it (amongst other things) reasonably and justifiably withholds a benefit from five-year-olds that it gives to adults according to objectively determinable criteria, namely age, which is intrinsic to the activity concerned – such as driving a motor car.

Importantly, however, section 13 of PEPUDA presumes discrimination on any one or more of the prohibited grounds to be automatically unfair – i.e. you are presumed guilty of discrimination until proven innocent. You then have the burden of proving that you discriminated for a fair reason in law.

The test for fairness:
Section 14 of PEPUDA sets out the factors a court has to consider, in determining whether the discrimination was fair or unfair.

The factors to be taken into account include, amongst others:

Fair or biased?
The problem with the section 14 test to establish whether the discrimination was fair or unfair, is that the test is biased – it focuses almost exclusively on the complainant (including the complainant’s position in society, whether he suffers from patterns of disadvantage, and whether he is part of a group that suffers from such patterns of disadvantage).  It fails, however, to explicitly take the respondent’s position into account at all – i.e. whether and to what extent, for example, the respondent’s fundamental rights (for e.g. to freely share and live out his/her religious convictions and beliefs) were relevant to the discrimination.

Due to the way the test is set up, it favours the right to equality and not to be unfairly discriminated against (section 9 of the Constitution), even where other fundamental rights, such as religious freedom (section 15 of the Constitution) are involved and are the very reason for the discrimination.  Therefore, even though our Constitution does not have a hierarchy of rights, PEPUDA effectively creates a hierarchy of rights, with the right to equality trumping other fundamental rights.

Death knell for religious freedom:
In a country where our Constitution does not force everyone to believe the same things and celebrates everyone’s “right to be different” (as the courts have called it), PEPUDA is often used to force people into an ideological cookie-cutter mould, even if it is against their deepest convictions and beliefs.

The Amendment Bill will exacerbate this already unfair situation by redefining the definitions of both “discrimination” and “equality” significantly. This not only makes the test for discrimination completely subjective, but imposes positive obligations on everyone to reach the Amendment Bill’s unattainable goals of equality.  Even unintentional acts or omissions will fall within PEPUDA’s grasp, with the net effect amounting to “strict liability” i.e. you can be found guilty of unfair discrimination in terms of the Act without there being any intention on your part to discriminate.

The scope of liability itself is drastically increased, even holding employers vicariously liable for the (unintentional) conduct of their employees.  It opens the front door for State regulation of religion, with the Minister being able to pass regulations and codes of conduct that dictate to the religious sector how to promote “equality” (as redefined in the Amendment Bill) in their public activities, and which will require them to make money available in their budgets to implement measures that will promote “equality” and eliminate “discrimination” in the sense intended by the Amendment Bill.  (For more on this, see the fifth article in our series on the PEPUDA Amendment Bill).

The Amendment Bill – if passed into law in its current form – will quite literally be the death knell for religious freedom in our country.  Religious autonomy – formerly considered sacrosanct, and allowing organisations to define their own internal processes and procedures and core tenets of faith and practice – will simply be over-ruled.  Similarly, independent faith-based schools will be a thing of the past.  Activists will have access to State funding to police this Act through litigation, which will have ruinous sanctions for those caught in the PEPUDA net.

Call to action:
Clearly, this Amendment Bill has radical implications for our religious rights in South Africa and we must oppose it.  FOR SA therefore calls upon every individual and every denomination, church and other faith organisation, to make your voices heard on this Bill by making a submission to the Department of Justice before Friday, 30 June 2021.  (Although the deadline for submissions on the Bill was on 12 May 2021 already, the Department has indicated to FOR SA that it would accept submissions until 30 June 2021).

A template submission (both for individuals, and for organisations) is available on the FOR SA website, which can be used “as is” or adapted and e-mailed to fbhayat@justice.gov.za

For more articles like this that explain what the PEPUDA Amendment Bill is about, and why it is such a major threat to religious freedom, visit our website at www.forsa.org.za  or follow us on Facebook at “Freedom of Religion SA”.

Please like and share this article far and wide so we can push back against this unnecessary and unconstitutional government overreach into our lives!