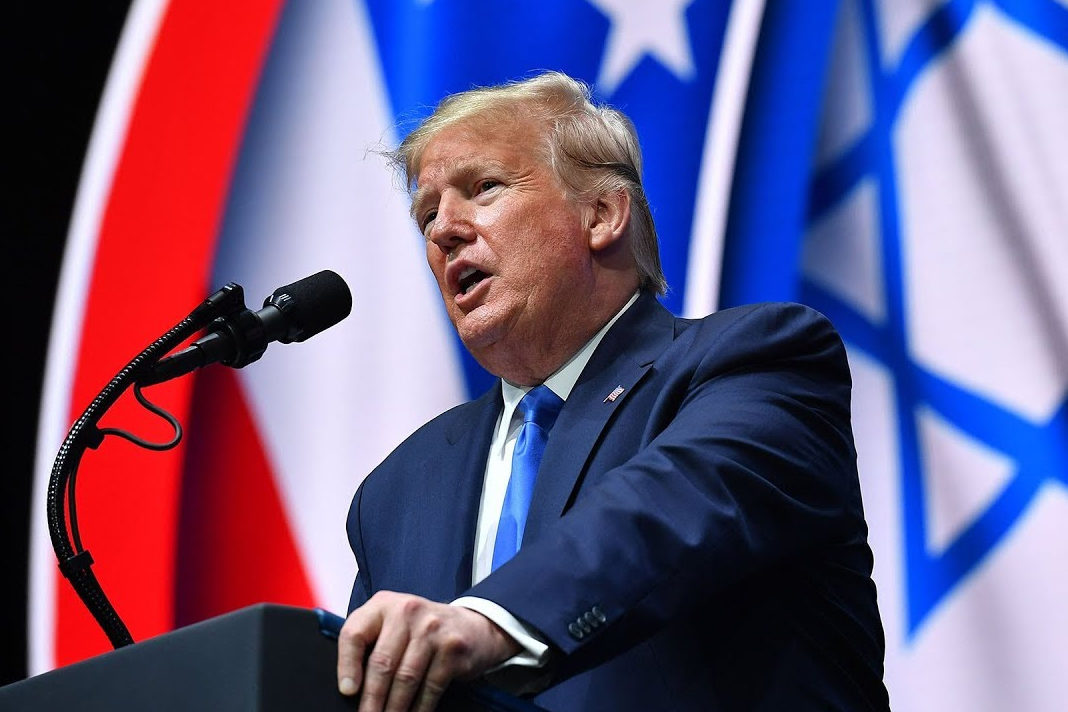 Trump blasted the anti-Israel BDS movement and other forms of anti-Semitism, vowed to keep pressure on Iran and touted his pro-Israel record in front of around 4,000 people.

At the Israeli-American Council’s annual conference in Florida on Saturday, U.S. President Donald Trump listed his pro-Israel accomplishments: recognizing Jerusalem as Israel’s capital and moving the U.S. embassy there from Tel Aviv, defunding U.S. assistance to the Palestinian Authority for rewarding terrorists and their families, withdrawing from the 2015 Iran nuclear deal and imposing tough sanctions on the regime, recognizing Israel’s sovereignty over the Golan Heights and declaring that Israeli settlements aren’t illegal.

He also touted that “the ISIS caliphate has been 100 percent obliterated” and that the U.S. military successfully targeted ISIS leader Abu Bakr al-Baghdadi in October.

In terms of the the U.S.-Israel relationship, Trump lamented that it “suffered greatly” under the Obama administration.

“I don’t think they liked Israel too much,” he said, adding that under his administration, the alliance between Washington and Jerusalem “is stronger than ever before.”

Additionally, Trump called out “the vile poison of anti-Semitism,” including the BDS movement, which has been echoed on college campuses and even by members of Congress. Trump also commented that U.S. Speaker of the House Nancy Pelosi (D-Calif.) has been “pushed around” by BDS proponents.

The president called out the House resolution in March that condemned anti-Semitism and other forms of hatred in the aftermath of Omar accusing her “Jewish colleagues” of attacking her and Rep. Rashida Tlaib (D-Mich.) for being Muslims.

“This could not have happened 10 years ago,” said Trump. “Radical lawmakers who support the BDS movement are advancing anti-Israel and anti-Semitic” legislation.

Earlier this year, Omar introduced a pro-BDS resolution. Although it does not explicitly mention Israel, she told Al-Monitor shortly before filing it, “We are introducing a resolution … to really speak about the American values that support and believe in our ability to exercise our First Amendment rights in regard to boycotting. And it is an opportunity for us to explain why it is we support a nonviolent movement, which is the BDS movement.”

In his speech, Trump also reiterated his support for the latest Iranian protests, which the administration said has killed an estimated 1,000 people.

Regarding the Iranian threat, Trump added, “We must never allow a regime that chants ‘Death to America’ or ‘Death to Israel’ to obtain a nuclear weapon.”

Trump also called for Israelis who are in Hamas captivity and whose remains are held by the terrorist group to be returned to the Jewish state.

Trump was introduced by Israeli-born Dr. Miriam Adelson, alongside her American born husband Sheldon Adelson. The pair are the mega-philanthropists behind Israeli-American Council, who Trump called the “fastest growing Jewish organization in America.”

Closing the speech, was a rendition of ‘God bless America,’ by the Israeli Shalva Band.