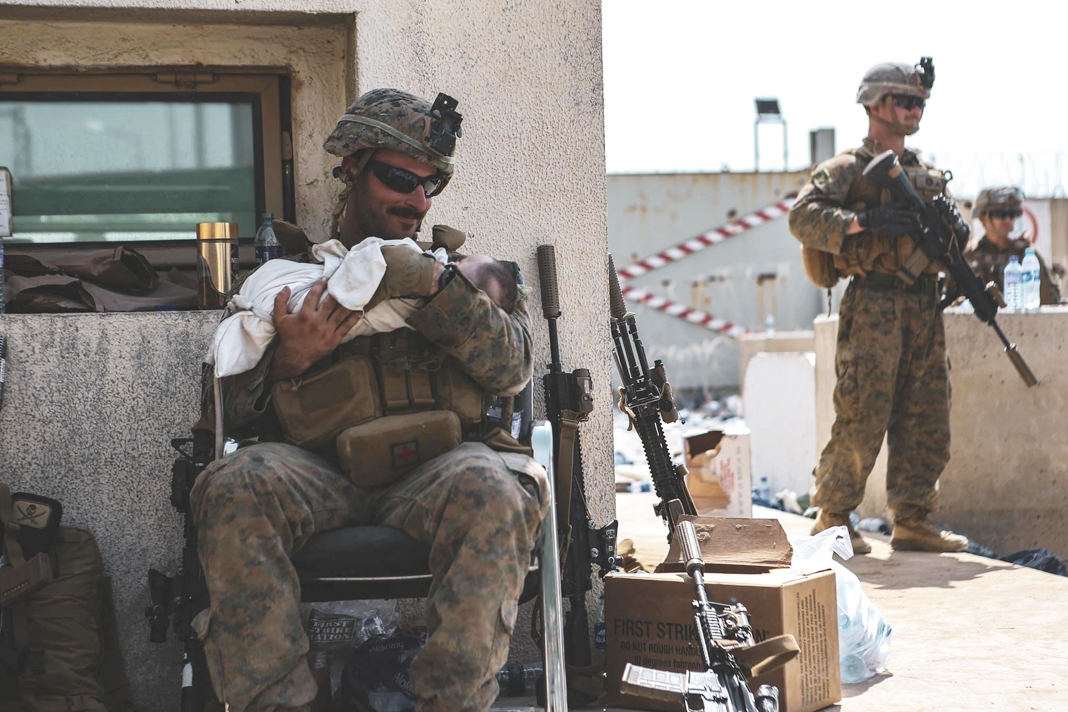 Recently the Taliban officially retook Afghanistan after the Biden administration evacuated the wartorn country. High-ranking government officials quickly fled Afghanistan, while Taliban leaders rapidly retook Kabul, the capital city. For many of the citizens of Afghanistan, this was a nightmare; thanks to the United States military, the Taliban had been kept at bay for 20 years. With an average age of 18, many Afghanistan citizens have never lived under the Taliban’s terrorist regime, and have grown up with previously unimaginable freedom. But with the Taliban back in power, many parents are taking desperate measures to help their children escape before it’s too late.

Rise to Peace, a non-profit organization devoted to fighting terrorism, has been sharing harrowing videos from Kabul, where thousands of Afghan civilians have gathered outside of Hamid Karzai International Airport in an effort to escape. Many of the videos show men helping women and children climb over the wall into the airport, aided by American troops.

People are so desperate to escape the #Taliban that they’re passing babies and kids forward to the gate at #Kabul airport. #kabulairport #AfghanEvac pic.twitter.com/6NSlIffrD1

Even more heartbreaking were scenes of infants and toddlers being passed over the barbed wire into the airport, their desperate parents so scared of the Taliban that they would rather risk entrusting their children to the soldiers than keep them in Afghanistan.

The baby in the video below being handed over the barbed wire to U.S. soldiers received medical treatment and was able to be reunited with his or her father at the airport, according to the Washington Examiner. “I can confirm the baby was reunited with their father and is safe at the airport,” said Maj. Jim Stenger, a Marine Corps spokesman. “This is a true example of the professionalism of the Marines on-site.”

The chaos & fear of people is a testament to the international community’s role in AFG’s downfall & their subsequent abandonment of Afghan people. The future for AFG has bn decided for its people without its people’s vote & now they live at the mercy of a terrorist group. #Kabul pic.twitter.com/k4bevc2eHE

Also on hand at the airport were troops from the United Kingdom. “The mothers were desperate, they were getting beaten by the Taliban,” a Parachute Regiment officer told the Independent. “They shouted, ‘save my baby’ and threw the babies at us, some of the babies fell on the barbed wire. It was awful what happened. By the end of the night there wasn’t one man among us who was not crying.”

The Taliban has already begun trying to prevent people from fleeing the country, physically attacking some civilians and tearing up travel documents, like passports. “This is what they did to me,” Amir Akhbar Mohammed told the Independent, showing bruises on his arms and legs. “I was with my family, one of the Taliban got angry at something my wife said and started beating her with a stick. I got these injuries trying to protect her. The man was actually trying to reach around me to hit her. They seem to like hitting women.”

Another woman, Shahanaz Nasimi, dressed modestly in a black abaya in an effort to prevent herself from being targeted. But she believes the Taliban attacked her in an effort to keep her from the airport. “[W]on’t anyone help me? I am young and I want to have a free life; that is not going to happen for me now in Afghanistan,” she said. “If we don’t get any country to take us, maybe the soldiers will turn us away from this area. That means we’ll have to go back down that road again, face the Taliban again, I can’t do that.”

A Marine assigned to the 24th MEU calms an infant during an evacuation at #HKIA Kabul, Aug 20.

U.S. service members and coalition partners are assisting the @StateDept with a Non-combatant Evacuation Operation in #Afghanistan. @USMARCENT @CENTCOM#Marines pic.twitter.com/dKKxjsa8Wq

Others, like Zarifa Ghafari, are expecting the Taliban to come for them. Ghafari, the first female mayor of Afghanistan, said she can’t evacuate without her family, even if it means a death sentence. “I’m sitting here waiting for them to come,” she told reporters. “There is no one to help me or my family. I’m just sitting with them and my husband. And they will come for people like me and kill me. I can’t leave my family. And anyway, where would I go?”

Other videos are similarly heartbreaking, with people clinging to United States Air Force planes as they take off, or with young girls sobbing as they beg American troops not to leave them behind.

Afghan girls beg American soldiers at the airport to save them from what they know is coming. pic.twitter.com/KQyxULaXXp

Another woman has been begging for any country to take her and her four-year-old daughter in as refugees, as her husband works for the Taliban. Even with a letter from the UN identifying them as victims, they were turned away because her visa was expired. “Afghanistan is Taliban. Taliban is terrorist. My husband is a terrorist Talib,” she said. “America, Canada, France, me and just my daughter … Anywhere! Any country.” Yet a Turkish officer was forced to turn her away and she went back, crying. A British officer, Maj. Steve White, stepped in to do what he could to help. “I can put her into the system, I don’t know if the system will spit her out, but I can do that,” he said.

The desperation from families hoping to flee, or willing to risk everything simply to give their children a chance at a better life, will haunt the soldiers who were there to see it, one soldier told Sky News. “It was terrible, women were throwing their babies over the razor wire, asking the soldiers to take them, some got caught in the wire,” he said. “I’m worried for my men, I’m counselling some, everyone cried last night.”