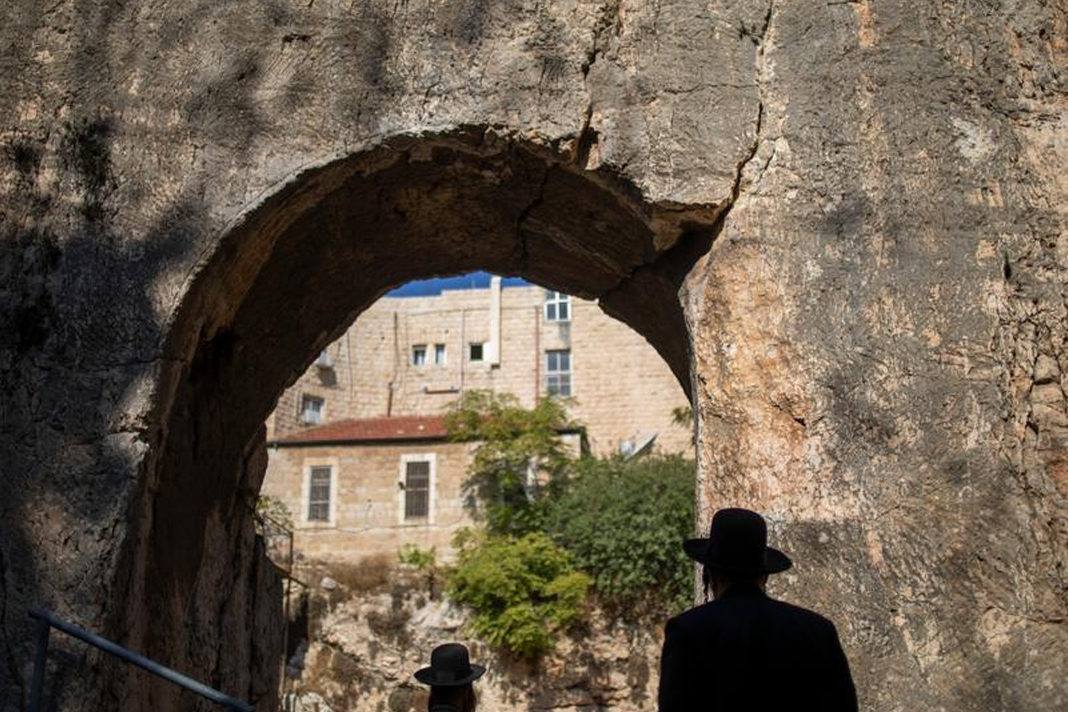 In 1878, a French Jewish woman purchased the property through the French consul in Jerusalem, and eight years later one of her heirs donated it to the French government.

French authorities reopened one of Jerusalem’s most magnificent ancient tombs to the public for the first time in over a decade, despite a dispute over access to the archaeological-cum-holy site in the city’s volatile eastern half.

After several aborted attempts, the French Consulate General reopened the Tomb of the Kings last month. But tensions between French authorities and Israeli nationalists and ultra-Orthodox Jews who seek open worship at the tomb and challenge France’s ownership continue to make day to day operations problematic at the site.

France, which has managed the property since the late 19th century, closed the site for an extensive $1.1 million restoration in 2009. The French tricolor flutters over the site’s massive black gate marked with the words “Republique Francaise,” which obscures the grand 2,000-year-old mausoleum and Jewish ritual baths from the street.

The Tomb of the Kings is an underground burial complex dating to the first century B.C.E and “definitely one of the most elaborately decorated tombs that we have from the early Roman period in Jerusalem,” said Orit Peleg-Barkat, a Hebrew University archaeologist. Access to the interior burial chambers is prohibited.

Felicien de Saulcy, a Frenchman who excavated the site in 1863 in one of the first modern-era archaeological digs in the Holy Land, mistakenly identified the tomb as belonging to biblical kings. He took two sarcophagi found inside, as well as human remains, back to Paris despite protest by the local Jewish community. They remain in the Louvre’s collection.

In 1878, a French Jewish woman purchased the property through the French consul in Jerusalem, and eight years later one of her heirs donated it to the French government.

Today, most archaeologists contend it belonged to Queen Helena, a Mesopotamian monarch who converted to Judaism in the first century B.C.E. Adiabene was an ancient Assyrian kingdom whose rulers converted to Judaism. One of the sarcophagi at the Louvre bears an inscription mentioning a “Queen Saddan,” possibly a relative of the Adiabenian queen.

“Altogether, I think there is a scholarly agreement that this tomb should be associated with Helena,” Peleg-Barkat said.

Jews who worship at the tomb believe it is the resting place of several prominent Jewish figures from antiquity, including the revered queen and her relatives, and that praying there will help bring rain and good financial fortune. Ultra-Orthodox Jews have called for the site to open without restrictions for prayer.

The surrounding eastern Jerusalem neighborhood of Sheikh Jarrah, however, is predominantly Palestinian. In this volatile city, visits by large numbers of religious Jews to a spot in the heart of a Palestinian neighborhood runs the risk of raising tensions or even sparking violence.

Israel captured the eastern part of the cityin the 1967 Six Day War and later annexed it, a move unrecognized by most of the international community. Palestinians seek eastern Jerusalem as the capital of a future state, while Israel considers the entire city its capital.

Yonathan Mizrachi, head of Emek Shaveh, an Israeli organization against the politicization of archaeology, said the tomb’s location in Sheikh Jarrah is what makes it so “politically problematic” for French authorities.

The past decade has seen a rise in Israeli nationalists buying properties in Sheikh Jarrah and other eastern Jerusalem neighborhoods. Just north of the Tomb of the Kings, an enclave of Israeli homes has grown around another ancient tomb in Sheikh Jarrah — that of Simeon the Just — where ultra-Orthodox Jews pray.

Since its closure in 2009, ultra-Orthodox Jews and religious nationalists have staged sometimes violent protests outside the tomb’s gates, calling for it to be opened. On top of that, Israeli religious groups have sought to strip France’s ownership in court. In 2015, two Israeli rabbis sued the French government in a rabbinic court for control of the site.