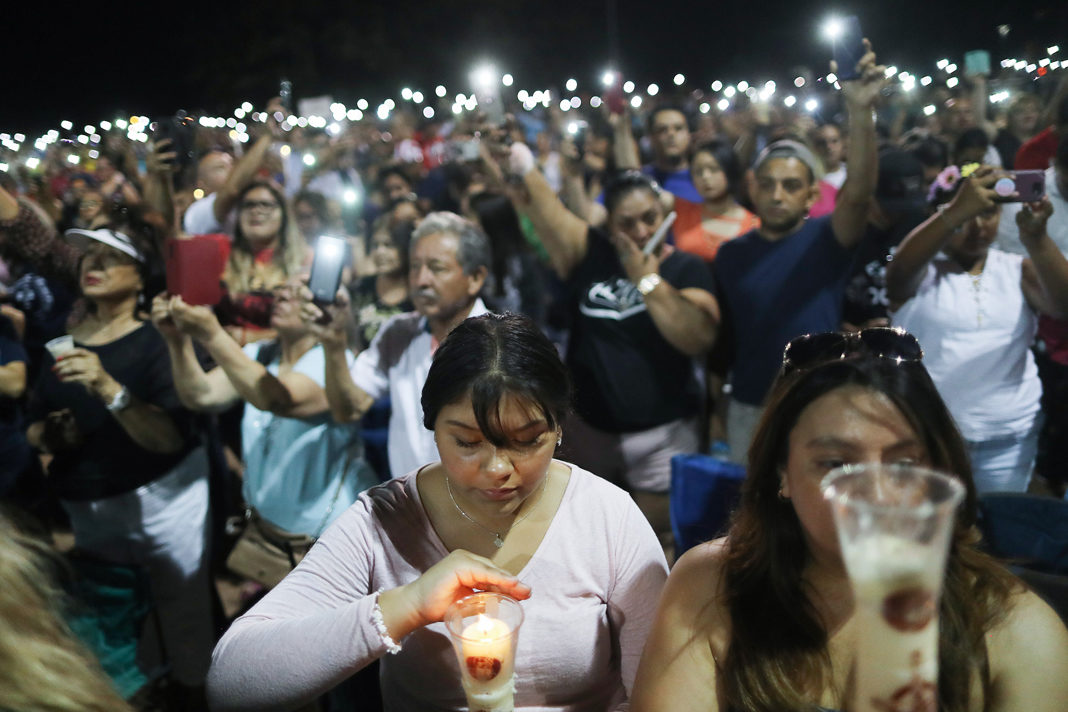 As the nation reels from two tragic shootings, Christian leaders are calling the massacres pure evil and urging people to seek a spiritual, not political, solution.

“If you turn on the television right now, you’re going to see the predictable responses, the pundits retreat to their perspective corners and people politicize it. I think there’s something bigger at play here,” said Greg Laurie, senior pastor of Harvest Christian Fellowship in California.

Twenty-nine people were killed over the weekend in two separate shootings — one in El Paso, Texas, and another in Dayton, Ohio.

The El Paso shooting on Saturday at a Walmart left 20 people dead and 26 injured. The suspect, Patrick Crusius, 21, was arrested on a capital murder charge with state authorities treating it as a domestic terrorism case.

According to police, the suspect posted a manifesto on the website 8chan before the shooting. The manifesto expresses support for the March shooting at a mosque in Christchurch, New Zealand, and warns of an attack in response to “the Hispanic invasion of Texas.”

In Dayton, nine people were killed and 27 were injured on the streets of a busy neighborhood around 1 a.m. Sunday. The suspect, Connor Betts, 24, was killed by police who were nearby less than a minute after the shooting began.

The victims included Betts’ sister, Megan, 22. Police have yet to identify a motive.

Here are five responses from Christian leaders and others to the massacres.

1. Pure evil
Greg Laurie said in a video, “There’s evil in the world. Man is not basically good, man is basically sinful. Number two, there’s a devil and the devil’s not down in Hell, he’s working in this world right now. The Bible even calls him the god of this world.

“I think when a person picks up a gun and decides to go and slaughter innocent people, this is an act of pure evil motivated by Satan himself.

“We need to really be praying in our nation for a spiritual awakening because we’re seeing more and more of these acts of violence and so many other problems in our country as well.”

2. Spiritual warfare
Jack Graham, pastor for Prestonwood Baptist Church in Texas, agreed with Laurie that the tragedies should not be politicized.

“This should definitely be apolitical because it means that all of us are involved in some kind of spiritual a battle, a warfare that’s going on.

“We need to remember that ultimately it’s a spiritual solution. We can’t politicize this.”

He also called for prayer and rejected those who say prayer is not important.

“People want to minimize prayer; [they say] all you do is pray. The most important thing we can do for people right now is pray. … Because if this is — as I believe you’re (Laurie) exactly right — a war against evil, against satan himself, then God has promised us a victory and that victory is in Christ alone.”

“Even though I walk through the darkest valley, I will fear no evil, for you are with me, your rod and your staff, they comfort me.” — Psalm 23:4

“This is the promise that God will lead us through the valley of the shadow of death,” Lucado said in a video.

“Yes, there is evil in the world but evil cannot have the world. In these times, we turn to our heavenly Father, our good shepherd and we ask Him for help.”

4. Do not be weary
New England Patriots tight end Benjamin Watson tweeted, “In the face of evil and tragedy be not weary in well doing. Never cease to be moved by the suffering of others.

“Mourn with those who mourn.”

5. 8chan shut down
Cloudfare announced that it is shutting down 8chan as it has “repeatedly proven itself to be a cesspool of hate.”

“The rationale is simple: they have proven themselves to be lawless and that lawlessness has caused multiple tragic deaths. Even if 8chan may not have violated the letter of the law in refusing to moderate their hate-filled community, they have created an environment that revels in violating its spirit.

“Unfortunately the action we take today won’t fix hate online. It will almost certainly not even remove 8chan from the Internet. But it is the right thing to do. Hate online is a real issue.

“Our whole Cloudflare team’s thoughts are with the families grieving in El Paso, Texas and Dayton, Ohio this evening.”

Date published: 07/08/2019
Written by: Sheryl Lynn, Christian Post Reporter
Feature image: People hold up their phones in lieu of candles at an interfaith vigil for victims of a mass shooting, which left at least 20 people dead, on August 4, 2019 in El Paso, Texas. A 21-year-old male suspect was taken into custody in the city which sits along the U.S.-Mexico border. At least 26 people were wounded. Getty Images/Mario Tama
Article source: www.christianpost.com